Baseball cards and Pokemon cards are the modern descendants of the 18th and 19th century trade card â€“ images printed on small pieces of cardboard and distributed as advertising for everything from innovations in construction equipment to the Victorian London demimonde. These cards became especially popular collectibles in the 1870s when new processes for color printing were developed.

One of the thousands of merchants producing trade cards was the English thread manufacturer J. and P. Coats Co., whose products can probably still be found somewhere in your home. Their 19th century specialty was a patented process of twisting multiple cotton yarns together to produce an exceptionally strong thread.

Hmmm … multiple … twisted … together … To some demented advertising mind, that suggested Mormonism.

This novelty-shaped trade card in my own collection, dating from the 1880s, shows two ladies embracing one man under the caption: â€œEvidently a strong attachment, but not comparable in strength to J. & P. Coatsâ€™ spool cotton.â€ The signpost points to Utah. So far so good — but I’m at a loss to explain the whisky bottle, coiled rope and pair of pistols lying on the ground to the right of the figures. 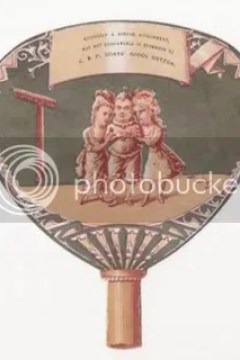