I suspect that on Thursday Mitt Romney’s Mormonism will perform the function that Mormonism has been fulfilling in American politics for a century and a half: It will be an anvil on which this mainly Protestant nation hammers out the place of religion in public life.

In 1856, the Republican Party was founded in opposition to the twin relics of barbarism: polygamy and slavery. By 1862, the GOP had enough political power to start putting some legal muscle behind the campaign slogans, passing the Morrill Anti-Bigamy Act. Four successive waves of legislation, prosecutions, and high-stakes litigation followed, until the church issued the Manifesto in 1890 and Utah joined the Union as a state. In the thirty odd years between the first Republican platform and the Manifesto, Protestant America used the Mormons to articulate the limits of religious toleration.

I find it fascinating that religiously motivated abolitionists were at times in the forefront of the anti-polygamy battles. In part, I suspect that the denunciation of Mormonism served an important function for them, namely as a defense to the frequent charges of religious extremism thrown at them by their critics. “We’re not the fanatics,” they in effect said, “those Mormons are!” Likewise, as Sally Gordon’s excellent book has shown, anti-polygamy allowed Protestant opponents of female suffrage, with their sanctified vision of the home that excluded women from the franchise, to say, in effect, “Hey, our religion is not repressing women. That is something only those nasty Mormons do!” In both instances, Mormonism served an important place in Protestant self-definition, and the intense legal pressure directed at the Mormons was as much about defining the identity of the anti-polygamists as it was about changing the identity of the Mormons, although change it the pressure did. 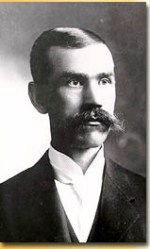 In the first decade of the 20th century, we saw a great aftershock of this battle. Mormonism once more became the anvil on which the rules of the game for religion in American politics were hammered out. Utah elected Reed Smoot (pictured to the right), a monogamous Mormon apostle, to the U.S. Senate. The result was a political firestorm, stoked in the Protestant churches and then played out in years of hearings before the Senate. The price of Reed Smoot’s admission to the Senate was a set of public pledges from the church hierarchy promising the final suppression of polygamy and the abandonment of lingering utopian ambitions. As Vanderbilt’s Kathleen Flake has compellingly demonstrated, however, Smoot’s election forced Protestant America to articulate the rules under which legitimate political participation was to be allowed, and there were specters other than Mormonism that stalked the Senate Committee on Privileges and Immunities. Rules for “Papists” and “Hebrews” were also being hammered out in those hearings.

On Thursday, I think that Romney’s speech will serve at least in part as an anvil on which one of the more surprising alliances in American politics will be hammered out: the one between conservative Catholics and Protestants. It wasn’t so long ago that the idea of an Evangelical-Catholic alliance would have been anathema to both sides. Indeed, the more conservative the believer the more anathema the alliance would have been. That changed beginning in the 1970s, when conservatives from both traditions decided that the forces of secularism were a greater threat than either Rome or heresy. The alliance, however, is not an entirely easy one. (Witness for example, the furor caused by Francis Beckwith’s conversion from Evangelicalism to Catholicism.) I suspect that not too far below the surface of the Religious Right one will find a deep-seated theological ambivalence: Did the religious conservatives sell-out theologically by clasping hands across what had been the ultimate divide in American religious politics?

Part of this tension has been managed by the promotion of “The Great Tradition,” a somewhat fictitious creation that, like ‘Judeo-Christian culture,” provides a coping mechanism for the cognitive dissonance created by the contradictory pulls of politics and theology. In effect, it allows Protestant and Catholic activists to tell themselves, “I didn’t sell out my beliefs for control of Congress; after all we both believe in Nicea and Chalcedon.” In a world of un-conflicted sectarian competition, I suspect that the Mormon rejection of the creeds didn’t matter all that much. Sure, it meant that Mormon theology was wrong, but everyone else’s theology was wrong too, so there was no special Mormon problem. Likewise, Mormon rejection of the creeds didn’t matter all that much when Ike presided over a culturally self-confident and complacent Protestantism. “Letting Mormons sit at the table,” the Protestants in effect told themselves, “doesn’t say anything about Protestantism because everyone understands that we wield ultimate control.” (Hence, for example, Mormon apostle Ezra Taft Benson — pictured at his swearing in left — could serve in Ike’s cabinet without the sky falling for Evangelicals.) Not so in a world where Protestant hegemony is challenged by the forces of godlessness.

Hence, I suspect that the reason why many within the Religious Right want to deny Romney (or any other Mormon) the Presidency is because Mormonism is an important theological marker that legitimizes the other theological compromises that have made the coalition possible. “Sure, we’ll work with the Papists,” the conservative Evangelical subconscious can say to itself, “but the Mormons are one theological compromise too far. I am not a theological sell-out because while I will accept Mormon votes, I will not accept a Mormon leader.” Soft-bigotry against Mormons facilitates broader theological cooperation.

As a Mormon, I have to say that living on the anvil where the concerns of others get hammered out can be a bit uncomfortable. On the other hand, I take solace in the fact that much of the time it probably really isn’t about Mormonism. Rather, it is about the theological stories that Mormonism allows conservative Protestants and Catholics to tell themselves.

← Orality, Literacy, Apostasy and Restoration
Polygamy: How Much Instead of How Many →

43 comments for “Thoughts from the Anvil”