… and if you had lived in the Mormon Corridor or somewhere else with a fully organized Primary, you would have become a Trail-Builder when you turned 10 in 1925, and you would have received one of the new “First Year Books” to track your progress during the year as your learned to do some really cool boy stuff.

Your handbook was decorated with the pine tree, your class emblem, and you learned how this tree represented the kind of boy you were learning to be:

Strong, straight, tall and true,
Ready to help friends just like you.
Strong in heart, and strong in strife.
Strong to battle the winds of life.
On, on I’ll go, and try to be
Oh God, just like a simple tree.

You learned early in the Primary year that a Trail-Builder worked on four different trails or paths in his life: Spiritual, Health, Service, and Knowledge, and all of your lessons and activities were designated as supporting one of those trails. As you completed a group of Trail-Building activities — abbreviated as “S-H-S-K” and pronounced “shisk” — you became eligible for badges that were a visible sign of your advancement. 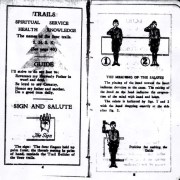 Your Book reminded you of your Guide, or motto:

I’ll strive to do my best to:
Reverence my Heavenly Father in word and deed,
Be loyal to my Country,
Honor my father and mother,
Do a good turn daily.

You learned the Sign: four fingers held up, palm front and thumb resting in palm — which reminded you of the four Trails you walked.

You learned the Salute: right hand placed over your heart to indicate devotion to the cause, then raised to a position next to your forehead indicating the cooperation of your mind with your hands, then dropped smartly to your side, and you practiced the salute until you could do it with military precision. 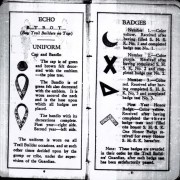 Your uniform was cool. It was simple: a felt cap in alternating panels of brown and forest green, with your class emblem — that pine tree — on the front; and a bandlo, a green felt collar which gradually became more and more decorated with the badges you earned as a Trail-Builder. (See A Bundle of Bandlos for more about the history of these popular 20th-century Primary relics.) The badges you earned in your first year of the two-year Trail-Builder program were sewn onto the right side of your bandlo: The yellow crescent was the award for passing your first “shisk,” the purple cross was the second, and the red triangle was the third. After that came the “honor badge” represented by the yellow angle, and you could earn lots of those if you were an active Trail-Builder.

As a Trail-Builder, you even had your own hymn:

Oh we are the boy trail builders
Out west where the sunsets glow,
Where the brooks flow down like silver
From the heights of the virgin snow.
We build our trails through the alleys
Where the heart beats light and free
Out here in the west from the pine clad crest
to the shores of the rolling sea.

Our light is the light of virtue;
Our strength is the strength of youth,
Our trails are the trails of honor,
For we build with the stones of truth.
Our course is straight as the arrow
With a faith that’s firm and true,
Our guide is the rod of the word of God
As revealed to the world anew.

Just for fun – you weren’t tested on it – your class even had its own acrostic touting the virtues you strove for:

TRUTHFUL Tom is a Trail-builder lad,
ROBUST is he and always glad.
ACTIVE, alert, ahead of the game,
INDUSTRIOUS, thrifty, headed for fame.
LOYAL and true, a trusty is he.

BRAVE through and through, as the bravest would be.
USEFUL and helpful, always right at the place,
INTELLIGENT, happy, a bright smiling face,
LOVING and kind, always ready to give,
DEVOTED, and thoughtful of others who live,
EAGER to be worthy of trust and of love,
REVERENT and true to his Maker above.

Finally, after learning in Primary about all the little trappings of your membership in the Trail-Builders class, you were ready to pass your tenderfoot test by answering these questions and making these demonstrations:

At what age does a Primary Boy become a Trail-Builder?
What is the emblem?
Illustrate the salute.
Recite the guide.
Give the echo.
Name the four Trails.
Know a prayer.
Recite a scriptural verse.
Name four trees that grow in your state.
Name the four principal points of the compass.
Before crossing the street or road, what should you always do?
Do three volunteer service tasks at home.

Your mother signed your book as evidence that you had successfully performed these tasks – and also certifying that you were becoming a frugal young man who had opened a bank savings account with at least 25 cents! Now you were a Trail-Builder, eligible to wear that cap and bandlo!

Your Trail-Builder book set out the “shisks” for you to earn your other badges, demonstrating things you had learned in your Primary classes and at your activities:

Badge Test No. 1. Do 11 of the following 13:
1. Name some of the characteristics of the pine tree.
2. Give the meaning of the Trail-Builder’s salute.
3. Recite two scripture verses.
4. What should a Trail-Builder do when the “Star spangled Banner” or “America” is sung or played?
5. Give reasons why you should keep nails clean and cut, teeth clean, and breathe through the nose.
6. Black a pair of shoes and fold your clothes neatly. Give evidence.
7. Give the names of your Primary President, your Bishop, your Stake President, the President of the Church.
8. Give the names of six domestic animals and state the purpose for which they are used.
9. Make a satisfactory Treasure Chest. [measurements and instructions conveniently found in your Book]
10. Know how to play “Johnny Ride the Pony” [rules for the game also in your Book]
11. Run a fifty yard dash in eight seconds.
12. Be able to chin or draw yourself up in good form.
13. Turn a cart wheel [described in your Book]

1. Know a Trail-Builders cheer or yell [several were given in the book]
2. Recite two scripture verses.
3. Draw a picture of the American flag.
4. Wrap and tie a small package.
5. What does it mean to be courteous? Reverent? Courageous?
6. Know how to wash windows, clean brass, or silverware, and make your own bed. Give evidence.
7. Describe four animals, plants, or birds, so completely that the hearers can guess the names (giving size, color, kind of teeth, how sleeps, what eats, etc.)
8. Climb a pole or rope 10 feet high.
9. Throw a ball first with the right hand, then left so that a boy ten yards away can catch it three out of five times.
10. Know how to “Cock Fight” [instructions in your Book]
11. Run a fifty yard dash in eight seconds.
12. Be able to chin yourself, or draw yourself up in good form.

Badge Test No. 3. Requires 11 of the following 13:
1. Know the Trail-Builder’s hymn.
2. Recite two scripture verses.
3. Tie a dog or other animal so that it will not choke or get loose. (See bowline knot.) [Instructions for this and other knots illustrated in your Book]
4. Name the principal streams in your locality, give source and outlet.
5. Direct a stranger from your home to the nearest garage, to the main road, to the next town.
6. Tell something of the history of your town. Name some of the first residents.
7. Have a savings account of fifty or more cents.
8. Know how to open or dismiss a meeting with prayer.
9. Make or repair or paint some toy or piece of home furniture.
10. Know how to play “Trail-Builders and Indians.” [You guessed it – instructions in your Book]
11. Running broad jump ten feet.
12. Running high jump three feet two inches.
13. Be able to dance the Trail Builders’ Jig.

Since you were a ten-year-old boy, you liked active games and races, and your Book suggested several:

This is a game of leapfrog. The players are divided into two even parties, except for one leader, one party being the ponies and the other the riders, or Johnnies. The ponies form one long back as follows: one player stands upright against a wall or fence; the first back stoops in front of this leader, bracing his head against him; the other players grasp each the waist of the player in front, and stoop with the heads against him or turned to one side (away from the jumper). When the backs (ponies) are ready, the riders all run toward them from the side, each rider vaulting from the side onto the back of one pony. The ponies try in every way, except by straightening up, to throw their riders while the leader counts fifty. If a rider be made to touch even one foot to the ground, the ponies have won and score a point, the riders exchanging places with them. If the ponies fail in this attempt, they must be ponies again. The side wins which has the highest score at the end.

Cock Fighting
Each contestant holds up whichever ankle he prefers and holds his arm behind. They take their position opposite each other just outside of a six-foot circle. At the word “Go,” they hop into the circle, and the one wins who succeeds in knocking his antagonist off balance or out of the ring. If a player releases his grasp with either hand, it is also considered a defeat.

The object of this game is for a party of Trail Builders to deliver food supplies to another Trail Builder who is supposedly besieged in a camp by a tribe of Indians. The Trail Builder is confined to a tent or small area in the center of the camp. The game is described as it would be played in the daytime.

Preparation: Divide the players into equal numbers of Trail Builders and Indians. Provide each Trail Builder with a supply consisting of a piece of paper upon which is written the name of a supply followed by a numeral which indicates the number of points to be scored for that particular supply. For example: Ammunition 25, Gun 20, Can of Beef, 15, Hardtack 10, Jam 5.

Both parties are given ten minutes to prepare for the game. The Indian Chief distributes his warriors around the entire camp. The Trail Builders’ captain distributes his men as he sees fit, beyond the boundary of the camp, and he gives each player a supply paper. Of course he gives his best players the most valuable supplies. At the expiration of ten minutes the starting whistle or bugle is sounded and the Trail Builders try to get through the Indian lines to deliver their supplies.

The Indians capture Trail Builders by any method previously agreed upon, such as:

1. Simply tagging one or more times on the back.

2. Snatching yarn tied around an arm.

3. Grabbing handkerchiefs allowed to protrude from the pocket or belt.

The instant an Indian makes a capture the Trail Builder begins to count to one hundred, while the Indian or Indians search. If, by the end of the count, the Indians fail to find the hidden paper, they escort the Trail Builder out of camp and he is permitted to try again.

Each player butts a dumb-bell or ball to the goat line and then runs back and passes it to the next player.

Players travel on all fours to the goal, imitate a donkey kick and bray, and then run back man-style.

… and eventually you would have tucked your bandlo away in some trunk or drawer, where its discovery would have mystified your grandchildren 80 years later.