While uncounted thousands of visual artists have contributed their skills to building Zion, the Fairbanks dynasty holds a special place in the world of Mormon art history: John B. Fairbanks (1855-1940) was one of the art missionaries sent to Paris by the Church, who came home to paint murals for the temples. His sons J. Leo (1878-1946) and Avard T. (1898-1987) have a catalog that must amount to a hundred or more Mormon-themed works: Leo is chiefly responsible for the friezes decorating the Hawaiian Temple; Avard assisted him there, and later did the frieze decorating the Harold B. Lee Library at BYU. Avard sculpted the Angel Moroni appearing on the Washington, Jordan River, and other temples. Many of our most familiar images are Fairbanks creations, and their works dot the continent. Avard’s son Jonathan Leo (1933- ) and other younger members of the family continue the artistic tradition.

Most of us have by now heard the Gospel Doctrine lesson on the restoration of the priesthood, and some proportion of our teachers probably displayed a photograph of the Restoration of the Aaronic Priesthood monument on Temple Square. The Presiding Bishopric (then consisting of Joseph L. Wirthlin, Thorpe B. Isaacson, and Carl W. Buehner), as presidents of the Aaronic Priesthood, commissioned Avard T. Fairbanks to design and sculpt that monument in 1957; in 1960, they asked for a similar memorial to be placed on the banks of the Susquehanna River, and Fairbanks designed a bronze relief of the same scene, mounted on a granite shaft.

Fairbanks was evidently commissioned to design the monument without a lot of input from church leaders – they approved the design, but did not dictate any particular form or content at the outset.

Fairbanks began by thinking about the Aaronic Priesthood, how it had influenced his life as a young man finding his way in the Church and the world, and how Church programs for young Aaronic Priesthood holders had served his eight sons (he also had two daughters).

I examined carefully the value of the Aaronic Priesthood and its program as directed by the Presiding Bishpric. I recalled how it had influenced my own life and the lives of my eight sons, all of whom had come up through the Aaronic Priesthood and all of whom are now honorable holders of the Melchizedek Priesthood. With excusable parental pride, I saw an aggressive program of character building as it shaped and guided my sons toward worthy objectives and high ideals, which resulted in honest achievement.

The authority of the Aaronic Priesthood is generally held by young men. And why not? Such Biblical names as Samuel and David remind us that God can use youthful instruments to further His purposes.

Because the restoration was an historical event involving known individuals, he would portray those individuals realistically – but rather than trying to recreate a literal representation of the event, he would design a more symbolic representation.

I’ve heard it said, but cannot confirm or identify parties, that some recent church leaders disapprove of the monument because it depicts John the Baptist with one hand on the Prophet’s head and the other on Oliver’s head, as if he were ordaining them at the same instant; some believe that this “false” portrayal is why the monument was virtually hidden for so long in the shrubbery on the periphery of the Square. Fairbanks studied the scriptural account; I’m sure he knew the John ordained Joseph first, then Oliver. Any lingering concerns over the “incorrect” historical portrayal could be alleviated by recognizing the symbolic elements of this seemingly straightforward depiction. 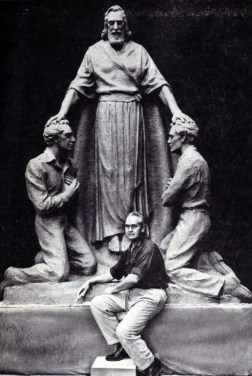 Fairbanks decided to use realistic, recognizable portraits of Joseph and Oliver, and to give John the face and figure of a real man, not an idealized angelic model. He would emphasize the youthfulness of today’s Aaronic Priesthood holders by emphasizing the youth of both Joseph and Oliver (neither of whom had yet reached his 25th birthday) and by portraying John as a young man (he was only about 30 when he died). The figures would be shown during the conferral of authority by the laying on of hands – while the two men did not receive the priesthood simultaneously, they both received the priesthood during the same event, and Fairbanks would represent that by showing the angel conferring the priesthood upon them both.

To focus attention on the central act, the three figures would appear, Fairbanks decided, without any foliage or other embellishment to distract the eye. The laying on of hands is a simple act, and he would honor the dignity and simplicity of that act by allowing it to stand alone.

He portrayed Joseph and Oliver as kneeling, representing their humility, but suggested the vigor of their youth by posing them in slightly off-balance positions – if you were to kneel in the pose of either man, your muscles would be taut, and that visible strain adds a sense of movement to an otherwise static view.

John himself is elevated slightly above ground level, suggesting his elevated status as a messenger from God.

An inscription – perhaps a little wordy for today’s taste, but narrating the event simply and unself-consciously – reads:

John the Baptist, Joseph Smith, Oliver Cowdery in the Restoration of the Aaronic Priesthood.

This event occurred on the banks of the Susquehanna River the fifteenth of May, 1829, near Harmony, Pennsylvania.

Joseph Smith in his writings states:

A messenger from heaven descended in a cloud of light, and having laid his hands upon us, he ordained us, saying:

”Upon you my fellow servants, in the name of Messiah I confer the Priesthood of Aaronic, which holds the keys of the ministering of angels, and of the gospel of repentance, and of baptism by immersion for the remission of sins; and this shall never be taken again from the earth, until the sons of Levi do offer again an offering unto the Lord in righteousness.” (Doctrine and Covenants, Section Thirteen.)

Erected by the Aaronic Priesthood in the year 1957.

Funds for the monument were raised in small amounts by donations from many holders of the Aaronic Priesthood. In accepting their donations, the Presiding Bishopric noted, “We must honor our priesthood, for it does mean as much to us as we are telling the world it does.”

Fairbanks wrote of his completed monument, “To me, the two monuments [he includes the later one placed at the Susquehanna] call to visual attention a beautiful story of the courage required of two young men to face a world of unbelievers. It was my intent, and I felt it to be that of the Presiding Bishopric, that these monuments should touch the hearts of all who hear or read the story of these men and this incident.”

I am happy to note that the monument was recently moved from its obscure position to occupy a much more visible spot on the Temple grounds, between the Temple itself and the South Visitors’ Center.

← Be Mannerly
Forgetting, and History →