A few weeks ago my father retired after spending three decades working for the Church Historical Department.  I’m no doubt guilty of an excess of filial piety, but I think that the Church and Kingdom are better for the work that he did.  In the mid-1970s, Richard Oman was a graduate student in art history at the University of Washington, whose eclectic interests — mainly in non-Western, tribal art — were getting in the way of a smooth advancement toward academic degrees.  The Church had recently decided to revive the old Deseret Museum that once stood on Temple Square.  An offer came to Seattle to leave the Northwest for Utah, and Oman was hired as part of the team charged with creating the new museum, which opened in 1984. 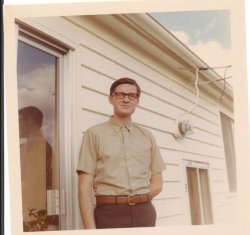 In addition to the documents collected in the archives, the Church also has a huge collection of art and artifacts.  Initially, Oman was involved in going through this collection and thinking about how a museum could be structured around it.  As a small boy, I have vivid memories of going to the basement of the Church Office Building, where the collection was then housed, and being allowed to handle such relics as the pepper-box pistol that the Prophet Joseph had at Carthage jail and touch things such as the printing press on which the Book of Mormon was printed.  (Not surprisingly, I was most interested in the guns.  Porter Rockwell’s revolver in particular was very cool.)

As the museum project progressed, Oman maneuvered himself into the position that he was most interested in: curator of acquisitions.  This meant that he was chiefly responsible for acquiring new objects for the museum’s collection.  As a kid, I told people that my dad’s job was to be “Indiana Jones for the Mormon Church.”  One of his central agendas during his years in this post was to expand the church’s collection of non-western Mormon art.  In the 1970s when he first came to work in Salt Lake, tribal art was still associated in the minds of many Mormons with the counter culture of the 1960s and 1970s, and he had to work hard to break down suspicions about “hippie drug art.”  He also faced deeper intellectual problems. 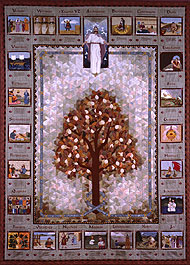 The first was the ambiguity of the very idea of Mormon art.  Was it simply art that was done by Mormons?  Was it defined by some particular style?  Was it confined to particular mediums?  Ultimately, my father and others working at the museum converged on consensus that stressed content:  Mormon art was art that had an identifiably Mormon content.  Armed with this definition, my father went in quest of such art.  At the heart of his searches was the belief that if the central Mormon narrative of the 19th century was the Restoration and Gathering to Zion, the central Mormon narrative of the 20th century was the expansion of Mormonism internationally.  Accordingly, the artistic expression of this 20th century story would require a new openness to non-Western genres of art.  “Art” could not be limited to oil paintings and bronze sculpture.  It had to include batiks, molas, Navajo rugs, Hopi pottery, African carving, and a host of forms that did not fit comfortably into the fine art canon.  Rather than artistically condescending to the tide of new converts in places like Latin America or the Philippines, he insisted that they should be artistically listened to and the contributions of their traditions to the Restoration should be treasured and appreciated.

This intellectual insight also leaves its foot prints on the memories of my childhood.  As part of his work, my father identified a host of Latter-day Saint artists who were Navajo, Hopi, Zuni, Pubelo, etc. and who were already producing high-quality work that had attracted the notice of art galleries and museums, especially in Santa Fe.   Many of them lived in remote corners of the Indian reservations of the southwest.  Accordingly, my father loaded up a church-owned van and took me with him on sweeps through the vast spaces of the Four Corners region visiting Mormon artists and collecting their work.  I remember meeting LDS weavers and potters in hogans and trailers, and panicking when the van sunk to its axles in the sands of remote washes. 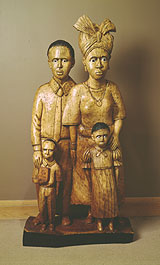 Because my father was trained in art history rather than art, his view of how art has been produced has always been historical.  One of the results of this is that he has never been particularly impressed by the Romantic model of the artist as the lone genius responsive only to the urging of his inner muse.  Art, he realized, is often a communal creation, one embedded in social and family networks.  This means that folk art — much of it produced by women — such as quilts and needlework needed to be included in the canon.  Likewise, art has often been produced in response to patrons, frequently religious patrons.  Accordingly, he helped to push the idea that the museum should not only collect and display Mormon art, but that it should also actively sponsor its production.  Again, the emphasis needed to be international.

The result has been the series of International Art Competitions sponsored by the church museum, each of which presents a broadly Mormon theme, such as missionary work or the Book of Mormon, and then solicits visual artists to enter their work, regardless of its medium or genre.  The result has been an ever increasing — and increasingly diverse — body of art infused with Mormon ideas.  The best works from the competition would then be shown in a museum exhibit, and the best of the best pieces would be purchased for the Church’s collection.  Increasingly, the results of this competition have made it into the Ensign and other church publications.  The chances are that if you see an artistic image in a church magazine that is not a bit of contemporary illustration, the image was produced for one of the Church Museum’s International Art Competitions. 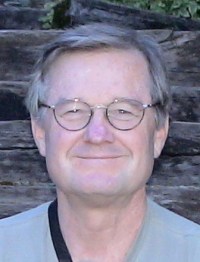 Toward the end of his career, my father became increasingly interested in the temple and its artistic significance.  He noted, for example, that in nineteenth-century temple murals we have one of the few examples of landscapes being used as explicitly religious art.  He also produced a study of the exterior symbolism of the Salt Lake Temple, as well as studies of other early temples.  When President Hinckley announced the massive expansion in temple construction, my father was invited to sit on the Temple Art Committee, where he pushed for a variety of innovations: First, he urged the use of decorative elements to localize the necessarily mass-produced mini-temples.  Taking buildings such as the Liae Temple as a model, he argued that decorative friezes and moldings could be altered to reflect local decorative traditions.  Second, he pushed for the return of original art work to temples.  Rather than framing church distribution prints, he encouraged the temple department to commission original works of art and to take advantage of the LDS artists who were willing to consecrate their talents to the beautification of the temples.  We can see the results in the original works of art that hang in many temples now, as well as the return of temple murals.

For example, if you go to the Winter Quarters Temple you will see stained glass windows portraying the events of the Mormon exodus that occurred where the temple is located.  My father was instrumental in getting those windows commissioned.  At the time I was working in Washington, D.C. and at my father’s request one day on my lunch hour I travelled to the old Washington chapel (now owned by the Unification Church) and photographed the stain glass windows in that building depicting the story of the Restoration and the Mormon exodus to Utah.  These photographs were later used as models for the Winter Quarters’ windows.

Of course, my father wasn’t the only force behind any of these developments, but he was a force in all of them and others having to do with the preservation of the material Mormon past and its interpretation.  He spent a lifetime (my lifetime) in the service of Zion, doing his part to help her put on her “beautiful garments.”  I believe that we are richer as a people for his work, and I am very proud to be his son.

← The Salamander Letter in a nutshell
The “anti-Mormon” label →

34 comments for “What My Father Did”