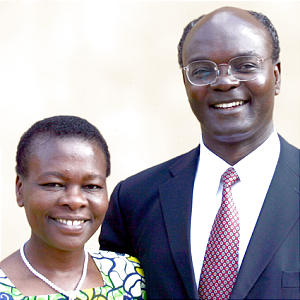 (Joseph and Gladys Sitati)
Elder Sitati is 56 and was born in Bungoma, Kenya. He is married Gladys Nangoni Nassiuma, with whom he has five children. In 1991, the Sitatis became the first Kenyan family to be sealed in the temple. Elder Sitati has served in a broad range of callings in the Church, including district and branch president. On September 9, 2001, Elder Sitati was called to serve as the first president of the Nairobi, Kenya Stake. He later served as an Area Seventy from 2004 to 2007, when he was called to his current position as president of the Nigeria Uyo Mission. Professionally, Elder Sitati is former executive with Total Oil and a former director of public affairs for the Church in Africa.

18 comments for “A Long Time in Coming”