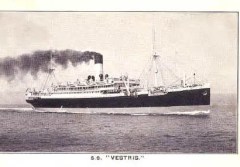 David Henry Huish, born in the Mormon colony of Morelos, Sonora, Mexico in 1906, and Keith Wynder Burt, born in the Mormon colony of Cardston, Alberta, Canada in 1908, met in the Mission Home in Salt Lake City late in 1928, after both young men had been called to serve missions in South America. After finishing their few days’ training in Salt Lake – which did not include language training – the two young men traveled together by train, via Denver, Chicago, and Washington, D.C., to New York City. They spent two and a half days exploring New York, then boarded the S.S. Vestris, a ship of the Lamport & Holt Line (British registry), which specialized in service to South American ports. The Vestris left its dock at Hoboken, New Jersey, at 3:45 on Saturday, November 10, 1928, and Elders Burt and Huish quietly celebrated the fact that they were really and truly en route to their mission field. They ate supper that night, as did most of the 129 passengers and 199 crew … but both landlubbers were already feeling a little queasy from the rocking of the ship, and they retired early. 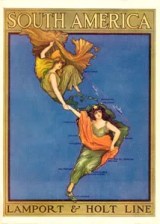 The boat was still rocking heavily on Sunday morning, and Elder Burt was feeling so seasick that he didn’t rise for breakfast. Elder Huish did go to the dining room, but the thought of heavy food made him ill, and he settled for a grapefruit. Elder Huish’s description of their first Sabbath as traveling missionaries:

The ship was rocking badly and it was a hard thing to make the dishes stay in place. I was obliged to leave the table, was dizzy and became seasick – the only time on the ship. On going back to our room, I found that elder Burt had been sick while I was gone, and he was ill several times during the day.

The ship listed and rocked considerably, so we stayed on our beds and slept practically all day Sunday, our main reason being not so much sleepiness as fear of seasickness. We remained in bed all that night, but did not sleep much. … I sang some songs and played a few tunes on my harmonica. Elder Burt had a saxophone along with him. he took it out and tried toplay a few pieces but found that it had a few keys out of commission. So ended the Sabbath on the S.S. Vestris. 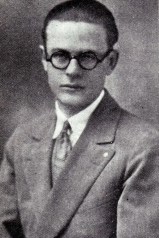 Because this was the first time either elder had been to sea, neither realized that the rocking of the boat was abnormal, nor did they understand some of the noises they were hearing. The Vestris had left its dock and steamed straight into the leading edge of a hurricane. As they proceeded southward, the seas got higher and the side-to-side rocking of the boat more violent.

The elders did not know that that the rocking had caused cargo to be ripped loose from its restraints in the hold, nor that the ship’s enormous stores of coal had shifted, preventing the vessel from returning to an upright position as each wave passed. The ship began to list ever more noticeably to one side – to the point where Elder Huish’s record says “The ship was tipped so much that it was hardly possible to stay on the bed, in spite of the railing.”

Nor did the elders know that shifting cargo had ripped four holes in the ship’s hull, and that the ship was taking on water rapidly. The captain had sent out an S.O.S. at 10:00 that Sunday morning, but after putting all available hands, including cooks and ship stewards, to work bailing in the hold, he decided his distress signal had been premature, and he cancelled it.

On Monday morning, both elders rose and decided to try their luck with breakfast. But when they reached the dining room after finding that “it was almost impossible to stand up in the halls, and we had to cling to the railing in order to walk,” they found no stewards in the dining room. Another passenger told them, “They’re all down in the coal bunkers bailing out water. Wouldn’t you rather go without your breakfast than lose your life?” This was the first indication the elders had that the Vestris was in trouble. “This is getting to be a serious matter; something is dreadfully wrong,” Elder Burt said to his companion. The two went back to their room and waited.

About 11:00 that morning, the two young men heard a commotion in the hallway and opened the door. There they found the third class passengers climbing up from below. One of the women with them, having thought that all second class passengers had already been evacuated, was surprised to see the elders. “For heaven’s sake, boy,” she said, “get out of your room, this ship is going to sink.” The elders joined the general exodus to the deck.

It took us quite a while to get there; sometimes we couldn’t climb the slant of the ship, and once I slipped and was thrown against a chair [on] the other side of the room and broke the chair into pieces. We finally reached the deck and had to lean against the wall or hold to the railing of the ship in order to stand up. Even ropes were used to help people from the stairways to the railing. 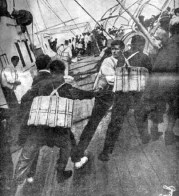 An amateur photographer with a small kodak camera snapped pictures that morning, some of which were later published in the Baltimore Sun, winning a Pulitzer Prize for that newspaper. The most famous of those pictures shows how badly the Vestris was listing, supporting Elder Huish’s description. 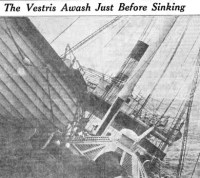 The sailors were attempting to lower lifeboats, a task made especially difficult because the boats had to be lifted so far over the side of the tilting ship. There was no general call by the crew for the passengers to don lifebelts, but most did anyway. Both elders strapped on their belts, over their overcoats. About 2:00 p.m., the ship began its death roll, and Elders Burt and Huish, sitting side by side in Lifeboat 4, realized that their boat had never been cut loose from the ship and would be pulled down with the Vestris sank. Both men jumped out of their boat.

Elder Burt made it into the water before the ship sank. Elder Huish did not.

I was still on the side of the ship when it went down and a big wave came along with the suction of the ship, and took me under. While in the water I caught hold of a panel, the bottom of a life boat or something, and came up. … I floated on a 2×12 plank for a few minutes and pretty soon a life boat, No. 14, came somewhat close and I swam over to it and was helped in the boat. We picked up about twelve more people – 19 in all. I looked constantly in the water and into the other life boats for Elder Burt, but he was not to be seen.

Nineteen in a lifeboat was a pitiful tally. Investigation later revealed that Boat No. 8 had foundered and sank with 65 passengers aboard. Boat No. 1, which rowed away and abandoned No. 8 rather than take any of its passengers aboard, held only about 10 – all but one of them members of the ship’s crew. One recent writer, reviewing the newspaper reports of the next few days, summarized their contents as “The headlines of the day told only of the sinking of the steamship Vestris and the epic achievements of the officers and crew in shouldering aside the women and children and saving their own lives.” In all, an estimated 111-120 perished in the hurricane-tossed waters off Virginia that day, a disproportionate number of them being passengers. The sinking of the Vestris was one of those great maritime incidents that resulted in massive investigation and the changing of laws, in this case the condition and provisions of lifeboats, which on the Vestris were decayed and poorly stocked.

The waves soon drove us from the wreck. We had no rudder and only three oars, so we were helpless in picking up any more people. The water was warm at first, but towards evening it became cold, and I never shook so much through fear of facing the public as I did during that night from cold. We drifted all night, without any flares or torpedoes. Two or three storms came up, one hail storm. By morning the waves were very high and we did not know at any time whether we would be swallowed up or not.

About 11:00 p.m. at night came our first hope, when we saw a flashlight. The ship came nearer and about 4:00 a.m. they picked up one life boat. From then until 8:00 a.m., we drifted and were finally picked up by the American Shipper – the last of the five boats that this ship picked up. We had been trying all the time to get their attention with a flashlight and with our shouts, but to no avail until after dawn.

They gave us something to eat on the ship, and a place to get warm and to dry our clothes. They searched for more survivors as long as there was any hope, and then set sail for new York, and arrived here about 9:00 a.m. We were treated well on the ship, but slept on blankets on the hard floor and were glad to get that.

Other lifeboats were rescued by other ships, and even some lone swimmers who had not made it into lifeboats managed to survive long enough for rescue. Elder Huish hoped and prayed that Elder Burt would be among the survivors, but his body was never recovered.

News of the sinking had reached the mission home in Brooklyn, and two missionaries were waiting at the pier to receive Elder Huish when the American Shipper returned to New York. Elder Huish was cared for at the mission home, the other elders contributing clothing and personal supplies, while his report of events was telegraphed to Salt Lake and to the family of Elder Burt.

Ships carrying Mormon emigrants and missionaries have had a remarkable safety record, but not a perfect one. Elder Keith W. Burt is the third missionary known to have died by accident at sea (the first two being Thomas Atkinson and Hiram S. Kimball, who died in 1863 when the boiler exploded on the small vessel carrying them from the wharf at San Pedro, California out to the steamer that was to have carried them to the Sandwich Islands. Many others have died of illness at sea or in their mission fields and await the day foreseen by John, “And the sea gave up the dead which were in it.” (Revelation 20:13)

← When is Sin Tax a Sin?
Information for the Next Six Months →