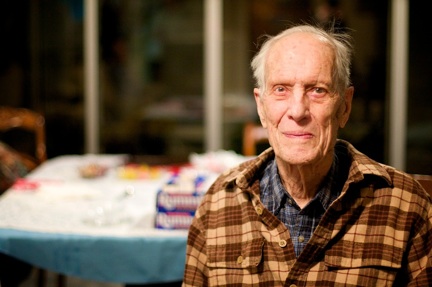 My paternal grandfather, Marc Ricks, is 98 years old. He was born in September 1910, just a few months after President Hinckley. He grew up in Idaho and California, served a mission to French-speaking Europe (France, Switzerland, and Belgium) in the early days of the Depression, earned an MD from the University of San Francisco, and spent 35 years working as a family doctor in the Bay Area. My grandmother passed away at the end of 2005, and since September of last year he has been living with my parents in Utah. Since I moved back to Utah at nearly the same time, I’ve been able to interact with him more frequently this past year than at any point in the past decade.

Physically, my grandfather is still hale, as he has been his entire life. We take it as a good sign that his eating patterns haven’t changed in more than half a century: ice cream at least twice a day, with cookies liberally available for snacks; other foods optional. His hearing is not good, but with his hearing aids he is able to participate in dinnertime conversation. His memory began to fail him a few years ago, however; its decline has been inexorable. When I visit, he gives a warm smile of recognition but is unable to recall my name. I think he understands that I am his grandson (I call him “Grandpa,” after all), but he gives no sign of knowing any details about my life. His short-term memory is particularly poor, and conversations with Grandpa inevitably loop back every few minutes to whatever topic or story is on his mind—not quite like a broken record, but rather like a persistent motif that keeps popping up in a concerto.

Grandpa rarely leaves the house anymore, except to go to church, which he emphatically refuses to miss. Instead, he spends his days sitting in my parents’ front room reading. In itself, this is probably unremarkable for someone of his age and situation. What he chooses to read is, I imagine, rather less typical: day after day he turns the pages of his own autobiography, a substantial tome which he self-published 15 or so years ago. He reads, I believe, to ward off amnesia, to remember the elements that have defined his life.

My grandfather’s life has little of the spectacular; what it does have is equal portions of the everyday heroic, the quietly tragic, and the exuberantly humorous. If you examined his autobiography, you would find it is made up mostly of short anecdotes from his family and professional life—simple stories told in straightforward, unaffected style. There’s the story about the choice he made after his mission to go back to school instead of staying in a job that was promising him a promotion. (Moral: get as much education as you can.) Another favorite is the time on his mission when he was so hungry that he ate soup even after a fly had landed in it. (This story has greater dramatic effect for those familiar with my grandparents’ famously fastidious table etiquette.)

He has so many stories from his years of medical practice that he published a separate book for those he couldn’t fit in the autobiography. Many of them are cautionary tales about human frailty or pride. He enjoys telling about the time a patient waited nearly too long to have “stomach” pain examined; an emergency appendectomy probably saved his life. Or the man who pretended not to have any sensation in his legs so that he could stay overnight in the hospital. When poked and prodded, he insisted that he couldn’t feel a thing. My grandfather uncovered the ruse by hiding a needle in a cotton ball. When we visit for dinner, one or another of these stories will come up and we’ll know what Grandpa has been reading that day.

Grandpa is no longer adding pages to his life story. At this point, he is merely reflecting on the past and enduring to the end. His ability to impact lives (at least my life), however, has not ceased. For one thing, I can hardly imagine a more ardent evangelist for journal writing. Without fail, each time I visit Grandpa will ask me if I’m writing my own history. And inevitably, the question will make me uncomfortable—I’m a sporadic journal writer at best. “You need to do it,” he says, holding my hands firmly and smiling. “It will remind you what a great person you are.” Grandpa still hasn’t lost his sense of humor.

This post is an homage to a man whose dignity and goodness I have come to admire even more as he has advanced into his second childhood, but also an appreciation of something I love about Mormonism: the way in which we emphatically affirm the power of narratives to move us, persuade us, shape us, and redeem us. Our compulsion to record and preserve stories—particularly family stories—is one of our most marvelous traditions. My grandfather uses his autobiography quite literally as an antidote to amnesia; and for all kinds of individual believers, myself included, the web of tales, both the supernatural and the ordinary, into which our lives play out, is one of our most precious possessions, a safeguard against forgetting what is most essential and true.

Sometimes I think of Grandpa’s autobiography as being like the stories of 1001 Nights. Each day, Sheherezade must add a new length to her skein of tales if she is to avoid an untimely end. And sometimes, though I know it isn’t true, I believe that as long as Grandpa has one more story to read from his book, he can hold on forever. After all, if there was anything Sheherezade knew—and that we believe—it was that stories can save lives, and the really good ones can last forever.

14 comments for “Tales from My Fathers”