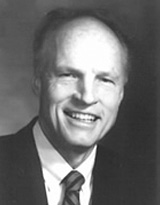 Truman Madsen died earlier today.  For those who don’t know, Madsen was a long-time professor of philosophy at BYU.  His intellectual influence, I think, came in two forms.  First, he produced a series of popular lectures on Joseph Smith and other gospel topics.  These were not academically rigorous productions, but I think that they opened a window into a much broader and intellectually exciting vision of Mormon history and theology for many members.  Madsen’s lectures were also a wonderful link back to an earlier, more oral Mormonism, one that placed a real premium on powerful preaching.  He was a powerful preacher.  Second, and perhaps more importantly, he provide two or three generations of BYU students with a role model of a man who remained absolutely committed to the Restored Gospel while at the same time willing to grapple with the hard questions of philosophy.

As I have been told the story, Madsen began his graduate training at California but abandoned his program because of anti-Mormon bias in the philosophy department.  He completed his Ph.D. at Harvard, where I believe he studied under Paul Tillich.  (His dissertation, which I actually pulled from the Harvard stacks for fun while I was in law school, was on Tillich’s theology.)  Prior to graduate school he received a blessing from Elder Hugh B. Brown of the First Presidency, who promised him that his testimony would remain strong through his studies and that he would be a means of blessing the Saints and Kingdom.  It was a prophetic blessing that was fulfilled.

“I have fought a good fight, I have finished my course, I have kept the faith: Henceforth there is laid up for me a crown of righteousness, which the Lord, the righteous judge, shall give me at that day: and not to me only, but unto all them also that love his appearing.” (2 Tim. 4:7-8)