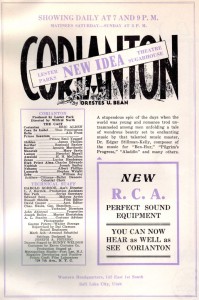 This past Friday I was privileged to attend a special screening of this early Mormon independent film. Produced in the 1920’s by Lester Park, the film first premiered in Salt Lake on October 1, 1931. Running nightly for two weeks, it ended to disappointing reviews and a tepid public response.

Long thought lost, it resurfaced again seven decades later when Park’s surviving daughters donated what is suspected to be the only print in existence to the Harold B. Lee Library’s L. Tom Perry Special Collections department. After a three year digital restoration project, the film has been preserved for historians (and, hopefully, the public) to view and appreciate as an important historical relic in the LDS film genre.

Frankly, the story behind the film is much better than the actual product. Ardis Parshall documents the history in a screamingly funny essay over on Keepapitchinin, and follows up with an equally entertaining essay on Orestes Utah Beane, the writer of the play and film. Seriously, go read her posts, they will give you a much better appreciation of the film than this review ever will.

The film actually opens in impressive fashion, with grand sets of Zarahemla and hundreds of actors all set against a fine musical score. It quickly moves into dialogue-heavy scenes introducing the main characters of Prince Seantum (a fictional character created by B.H. Roberts in his serialized novella), Korihor, Alma, Corianton, and Shiblon.

The first scenes are promising, as they touch in dramatic fashion Korihor’s preaching and echo the debates of the turbulent 1920’s (and, timelessly, echo debates today). Included in these first few minutes is a fairly shocking special effect as Korihor is struck down by a lightening bolt (Industrial Light and Magic this is not, but for 1931? Not bad).

But the film quickly devolves into a poorly-paced series of scenes full of forced dialogue, mediocre acting, and horribly funny fighting. And I’m being generous. Pointing out that this film was produced in the 1930’s does not redeem it. As I tweeted my 140 character review after leaving the library:

Corianton – A Story of Unholy Love is black and white, with sound, and would probably earn a PG-13 rating today. There is some brief female nudity/near-nudity, largely just an incidental side shot. It follows the key scene depicting the seduction of Corianton, complete with dancing women and free-flowing wine. In the remarks before the screening, the staff at Special Collections and the family tried to put this in context with other productions from this time period, and seemed genuinely concerned about the reception of potentially risque scenes.

Those concerns may be appropriate for the LDS audience, but I think they are overblown. Viewed in 2009 the limited costume coverage is unremarkable, and the hip-grinding choreography is fun but chaotic and unimpressive. Honestly? Beyonce’s music video has more skin and hip-grinding action. (Hat tip: Kanye)

At 147 minutes, it is about 117 minutes too long. It’s heavy on dialogue, it moves slowly, the choreography is a mess, and the fights are laughable.

But viewed as an interesting project from the early years of LDS film, it’s worth the time. At least once. And who knows? It might be fun to watch this in a campy, cult-film fashion, dressing up (or down) in the costumes, repeating dialogue, and doing a little bit of hip-grinding dancing.

We desperately need an alternative to Saturday’s Warrior. Corianton just might have the makings of a hit.

← Some Notes on the New Spanish LDS Bible
MR: “Exaltation and the Lost Symbol” →

13 comments for “Corianton – An Unholy Review”