Some years ago I sat in a Gospel Doctrine class taught by a physician. I mention his profession because I think it matters, as he took the opportunity to deviate from the lesson and condemn in the strongest terms the theory of evolution. He labeled it a satanic concept, one that we must avoid, one that destroys faith.

I took a deep breath and then spoke up. I pointed out the numerous statements and scriptures supporting learning from the best books, and pointed to Brigham Young’s statement that Mormonism embraces all truth.

It wasn’t the most uplifting class. I might have handled it better. It created a tension between us that never really dissipated. And I made a mental note to seek medical care from someone that actually puts stock in the foundational theory of modern biology. (This wasn’t anything personal, it couldn’t have been. He is an OB/GYN, and I am decidedly male, so it really didn’t matter in this case.)

I’ll state this bluntly: I believe that a rigid, literalistic stance is dangerous. It is dangerous to our children as it forces them to face a false dilemma. If we teach that a literal reading of scripture is the only proper reading, what happens when our children reach high school and college and they see the vast weight of evidence – and the consistency of that evidence – as it points to an old earth and natural selection? Must we force them to choose between their faith and their intellect? This is a losing proposition. The loss is the very children we seek to teach and nurture and help to return to God. It’s a high price to pay, and one that is completely unnecessary.

Reconciling science and scripture needn’t diminish the teachings found in our canon. Scripture is sacred, but it was written largely by nomadic, bronze- and iron-age societies. We can be charitable in our readings, seeing their writings as the response of these ancient communities to their experience of God. It contains their stories of God, their perceptions of God’s character and will, their prayers to and praise of God, their perceptions of the human condition and the paths of deliverance, their religious and ethical practices, and their understanding of what it means to be faithful to God.

There are treasures within the scriptures. If we approach them with an open heart, they have the power to work within us and help us to connect with God. 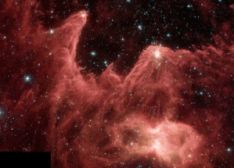 But on this day, the 150th anniversary of the publication of Charles Darwin’s On the Origin of the Species, we should remember that in addition to the writings in the scripture, we also have the writings in the stone. Both testify to the wonder and beauty of God’s creation, if we are open to viewing them as they really are.

I find hope and inspiration in the world around us, in the story it tells us, in the vast time-frame that it speaks to. If I might share an extended quote, I will close this post with the words of John Polkinghorne, a Cambridge physicist and Anglican priest. He was interviewed by Krista Tippet for Speaking of Faith in 2005, and I return to this when I think of the world around me:

…God is not a god in a hurry. That’s clear. God is patient and subtle. God works through process and not through magic; not through snapping the divine fingers. And I think that’s what we learn from seeing the history of creation as science has revealed it, and I think that tells us something about how God acts generally. And, when you think about it, if God really is a God whose nature is best described as being the God of love, then that is how love will work. Not by overwhelming force, but by, if you like, persuasive process. So I think we learn something really quite valuable from that. Again, it’s an example of how religious insights about the nature of God and the scientific insights about the process of the world seem to me actually to be very consonant with each other. You can’t deduce one from the other, but you can see it and they fit together in a way that makes sense. They don’t seem to be at odds with each other, and I find that encouraging.

97 comments for “Writings in the Stone”