Christmas Season, 1989. I was a freshman at the University of Utah, my first year away from home. As a poor student I was looking for extra holiday cash, and the Help Wanted ad for a shopping mall Santa seemed like just the thing.

Despite my 18-year-oldness, the manager was desperate to fill the big chair, so I walked out of my short interview with a prosthetic belly, a red suit, a wig, and some bells.

I spent several years playing along, afraid to reveal that I knew the big secret, afraid that the loot would vanish.

Life as an 18-year-old Santa wasn’t very glamorous. I would lug a large suitcase to the mall and make my way upstairs, beyond the food court, into an access hallway, and finally to my “dressing room.” A janitor’s closet. Yes, literally. Complete with mops, buckets, vacuums, and the acrid smell of cleaning agents. In this little room I would transform into a fat, jolly elf. I’d put on my belly, don my red velvet suit, deftly apply the makeup to add decades to my face, and top it off with the beard, wig, and hat.

I was Santa. On the outside anyway.

On the inside I was recoiling from the ever-lengthening holiday season, the Christmas music beginning on Halloween, the in-store decorations getting dusty even before Thanksgiving, all presided over by the retail juggernaut. I wanted the magic of Christmas. I looked for it. But it had been elusive, making me weary and jaded.

I’d sit in that janitor’s closet and wait until I heard the sound of Santa #1’s bells coming down the hall. We’d exchange pleasantries, I’d wait a few minutes, and then, trying not to sweat, jog to the door and throw it open, shouting “Ho Ho Ho!”

Trotting is best, the manager had told me. It shakes the bells in a rhythmic fashion, it makes you look jolly, and it allows the youngsters to keep up. So, I trotted down the stairs, trotted into Santa’s village, and trotted to Santa’s throne.

It took a bit of politicking to talk as Santa to children. I saw their hope, their excitement, their wonder—and I wanted to keep that, not destroy it. But at the same time, I couldn’t promise anything, especially when I saw anxious parents watching me, silently calculating the financial damage in their heads. A simple “Santa will do his very best, and you have a Merry Christmas” was usually best for everyone involved.

After a while, though, I really got into this Santa thing. Even though I didn’t feel the Christmas magic myself, I seemed to have a knack for spreading it around. So I decided to use my Santa costume and visit friends from my hometown. A few days before Christmas, I started attending their holiday parties as the fat man, spreading that Santa-ness around. I loved it.

One night I was driving along a rural road on my way to another party. I saw a flash in my headlights and hit the brakes. But a sickening thump told me I had been too slow. 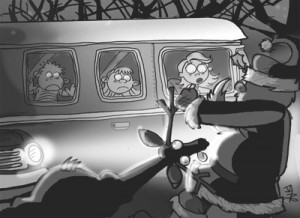 I stopped and checked my rear view mirror. A deer’s still bleeding body was crumpled in the middle of the road. I sat there, contemplating the slick roads and the falling snow. I couldn’t just leave it; another car was bound to be along soon. So I turned around and illuminated the scene with my headlights. Then I got out of the car, grateful for the warmth of my Santa suit, and began pulling the deer to the side of the road.

At that very moment, a van passed by.

Mom and Dad stared at me from the front seats; several children’s faces were plastered to the window. They looked as if they’d just witnessed a murder.

Donner. Dead. The big man trying to hide the evidence.

The little girl on my lap was eight, maybe nine, and dressed in the finest winter apparel. She arrived with a mom to match. They had probably arrived in a gold-trimmed Lexus. I braced myself for a long list of toys and clothes and games.

But she was polite, she was tentative, and when the moment came, this young girl looked directly into my eyes and, with unquestionable and absolute sincerity, said simply, “I want the kids who don’t get Christmas to have a Christmas this year.”

I wasn’t prepared. I was speechless, choked up, stunned. What would you say? She believed in Santa. More than any other kid I had met. I could see it in her eyes! What’s more, she was Christmas; the generosity, the charity, the love, all wrapped up in a little brunette bundle. Her hopes and wishes were genuine and heartfelt. And Santa could do this; he’d deliver!

Last year my older kids wanted electric scooters. Being well-trained consumers, my wife and I obliged. I ordered my daughter a really cute, mini-Vespa-looking thing. Pink. UPS delivered it to the front door. Except it arrived during Christmas vacation, and the box had a big picture of the scooter prominently displayed on the outside.

My daughter signed for it.

I think I handled the whole thing well. Sure, there were trauma and tears, but after a good long talk Santa had hired a new, world-wise little elf to help out on Christmas Eve.

But it’s one thing to have your hopes dashed by a UPS driver at the door with a scooter. It is quite another to wake up and realize that Santa hadn’t come through, yet again, for all those kids who don’t have a Christmas.

I often think back to that earnest little girl. I wonder about her. She gave a young shopping-mall Santa a gift, but where is she now? Likely a young mother, with her own toddlers in tow, trying to find the spirit of the season she embodied so long ago.

Originally published in the Winter 2008 issue of Sunstone Magazine.

9 comments for “Confessions of a Shopping Mall Santa”