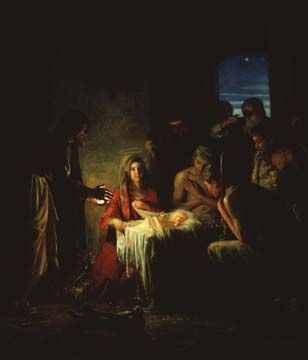 This Christmas Eve, most of us will at least read the “Christmas Story,” as found in Luke 2:1-20. As we approach the holiday, a few more diligent souls will read all of the Infancy Narratives, as found in Matt 1-2 AND Luke 1-2. Yet even when reading (as opposed to just remembering or “thinking” about) these familiar texts, the tendency will be to harmonize the two accounts, resulting in a hybrid vision of the birth of Jesus that accords nicely with the Christmas pageants that we will watch and the Nativity scenes that we have set up. But our Christmas creches—which confidently put three kings (as opposed to two or more magi or wise men) at the stable (not mentioned in Luke, although he does record a manger) along with shepherds and various animals under a star—are the result not only of jarring harmonization, but even some creative fabrication.

This harmonizing tendency is alive and well in the LDS community, perhaps as a result of Elder Talmages well-known and familiar Jesus the Christ, Elder McConkie’s The Mortal Messiah, and our Gospel Doctrine’s curriculum, each of which draws from all four gospels to produce and fill in a rough chronological account of our Lord’s mortal life and final salvific acts. This impulse is natural enough: after all Jesus’ ministry, death, and resurrection were historical events, so the four surviving, canonical accounts should represent those events accurately.

Yet the four gospels were written by four different evangelists with four different approaches, thematic interests, and even theological focuses.  They worked with some of the same source material to produce unique narratives, even when, as seems to be the case with Matthew and Luke, they were following another account (sc. Mark) for the basic outline.

There is a comparison here, I think, to Book of Mormon authors and especially its prophetic editors Mormon and Moroni, who selected events from their history to illustrate different theological points (I always insist that my Freshman Book of Mormon students approach that text as a sacred record, i.e. theological historiography, rather than post-nineteenth century scientific history, even though that was the way that nineteenth century LDS leaders tended to view it). The New Testament Evangelists did so likewise elected episodes from Jesus’ ministry, arranging them as part of larger literary schema (note, for instance, Mark who has a basically geographic or thematic organization rather than a chronological one, making a single visit to Jerusalem the culmination of Jesus’ life, no doubt at the expense of Jesus’ actual travels).

As a result, I find it most useful to study, and teach, the gospels separately, only admitting a composite approach when we get to the Passion and Resurrection Narratives, which is the only time all four texts converge upon and then follow a basic sequence of events (leading some scholars to propose the existence of a primitive passion narrative, whether oral or written, that the four evangelists employed). Studying the gospels separately allows us to see the literary and thematic intents of each author without spinning our wheels trying to prioritize accounts or harmonize them.

This, of course, applies to the Infancy Narratives, because the account of Matthew is strikingly different than that of Luke. True, the essential elements are the same: Jesus was born of Mary in Bethlehem under miraculous circumstances (as we will see with my final guest post, “A Book of Mormon Christmas,” these are the very details that Book of Mormon authors agree upon in their prophecies).

So tomorrow I plan to blog on the Matthean Infancy Narrative, followed by the Lucan account on Wednesday. The blog form compels a certain simplicity, so do not expect too much in this medium. For those who want to study along with me, I will note my basic survey lecture on the Infancy Narratives from my Rel A 211 class.  Mark, presumably the first gospel written, does not include any account of the divine conception and miraculous birth.  Rather his gospel begins with God declaring Jesus to be his son at the baptism (what is known as a low, “adoptionist” Christology).  This has led some to propose that when “Matthew’ and then “Luke” began composing their gospels they realized that Mark’s text did not adequately emphasize the divinity of Jesus, hence their inclusion of the Infancy Narratives.  The style of Matt 1-2 and Luke 1-2 is different enough from the rest of those gospels that some even suggest that they were composed after the rest of those gospels.  Regardless of the motivation, the inclusion of Infancy Narratives proved to be an important development in the gospel medium: Infancy Narratives at the beginning and Passion/Resurrection Narratives at the end provide important frames or pendants, answering the basic Christological questions of who  Jesus was (the literal son of God) and what he came to do (suffer, die, and rise again).

[No time to explore the “high” or “preexistence” Christology of John here, but if it is not poor form, I would point to a forthcoming article that I have coming out in Studies in the Bible and Antiquity, “And the Word Was Made Flesh: An LDS Exegesis of the Blood and Water Imagery in the Gospel of John,” where I propose that the Johannine equivalent of the Infancy story is not the Logos hymn of John 1:1-18 but rather the sign of the water turning to wine at Cana in John 2!]

For those who are interested in more in-depth treatments of the Infancy Narratives, I would point first to the late Raymond Brown’s magisterial The Birth of the Messiah (Doubleday, 1993): 752 pages on just 2 chapters of Matthew and 2 chapters of Luke! Father Brown was an ordained Roman Catholic priest and a scholar, who served as president of the Society of Biblical Literature. I first came to know him from his 1608 page, 2 volume treatment of the passion narrative, The Death of the Messiah and subsequently by his Anchor Bible commentaries on John. 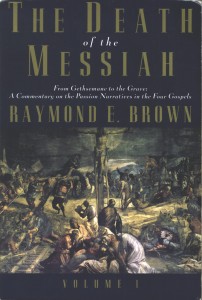 As I was negotiating my change from Classics to Ancient Scripture, Father Brown served as a model of believing scholarship to me, a position newly filled in my view by Ben Witheringon, an evangelical scholar. Ben has not done a commentary on the Infancy Narratives per se, but pages 61–72 of his New Testament History: A Narrative Account (Baker, 2001) provide a good survey of the basic historical issues from a faithful perspective. For a more “secular” approach, see The First Christmas: What the Gospels Really Teach About Jesus’s Birth by Marcus J. Borg and John Dominic Crossan (two scholars of Jesus Seminar fame [or infamy], but they are competent with the source materials and worth looking at).

Since NONE of us have time to read all 752 pages of Father Brown’ Birth of the Messiah before Thursday evening, I thought that I would also make you aware of a series of short, homiletic books that he issued, partially to help Catholic priests in their preaching during Advent, Christmastide, Holy Week, and Easter. These brief treatments incorporate much of the scholarly insight of the big volumes, distilling it down to manageable units and including more devotional material than he does in the scholarly treatments.  The titles are A Coming Christ in Advent: Essays on the Gospel Narratives Preparing for the Birth of Jesus : Matthew 1 and Luke 1, An Adult Christ at Christmas: Essays on the Three Biblical Christmas Stories, Matthew 2 and Luke 2, A Crucified Christ in Holy Week: Essays on the Four Gospel Passion Narratives, and A Risen Christ in Eastertime: Essays on the Gospel Narratives of the Resurrection.

← Christmas with Autism
When Stereotypes Collide →

20 comments for “Studying the Infancy Narratives”