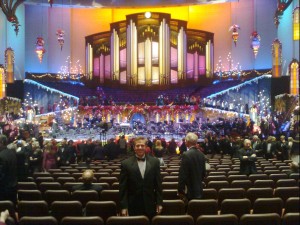 Eric in front of the set after the final performance Sunday.

[Choir policy keeps members from posting or blogging about the Choir before and even during events.  Here I am sharing only some very general information about the concert after it is over. Although I will respond to comments, I do not intend to speculate on policies, how guests are chosen, etc.]

Perhaps the most important thing that the Tabernacle Choir does is provide music for several of the session of General Conference. After that, our biannual tours rank high as perhaps our most overt and perhaps important missionary outreach. While the weekly broadcasts of Music and the Spoken Word fill a similar purpose, probably the most exciting event to participate in is our annual Christmas concert.

Since the dedication of the Conference Center almost ten years ago, the concert has reached a stunningly large audience: 21,000 for a ticketed “dress rehearsal” Thursday evening, 42,000 for the official concerts Friday and Saturday night, and then nearly another 21,000 for the Sunday morning broadcast, which includes many numbers from the concert and then is followed by a “mini-concert” that is not broadcast but includes most of the remaining repertoire. That equals about 84,000 people who are the recipients of this annual gift by the Choir and church to the community. For the past several years, some 90% of the PBS stations in the U.S. have been broadcasting the previous year’s concerts.

I first attended one of the concerts the year before I joined the Choir, when Walter Cronkite was the guest. He gave a stirring reading, recounting the so-called “Christmas Miracle” of a WWI truce. My first year in in the Choir saw two vocal guests, Bryn Terfil and Fredrika von Stade. The next year, featuring Audra McDonald, was the first to see what has become a standard of the concerts, an opening processional including orchestra, Choir, dancers, and now bells.

Being part of the production means that we as singers have a different experience than guests in the hall. On the one hand, we tend to be aware of more of the challenges—problems with pitch, ensemble, energy, etc. But former Choir members who have since viewed the concert from the audience have told me that these kind of issues are rarely perceived in the house. Instead it is the overwhelming auditory and visual effect that leaves the greatest impression.

The pictures that I am including with this post do not do the set justice: they were taken with my very poor camera phone after the final performance this last Sunday. But they do give a sense of how the Conference Center rostrum is totally transformed. This year, during the big production number “Carols around the World,” a huge lighted Christmas tree arose out of the stage floor. 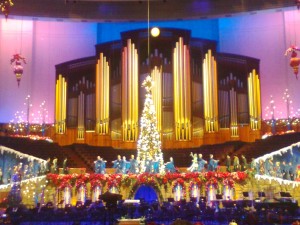 A huge Christmas tree was raised from under the stage at the high point of the year's concert.

Of course, one viewing the set has no idea of the hours and hours of effort that have gone into preparing it, costumes, etc. And then there is of course the time spent by the Choir and the orchestra in preparing the music . . . although this is probably less than many people think. We performed the Mahler Second Symphony for the Tanner Gift of Music the weekend before Thanksgiving, so most of the extra rehearsals in November actually focused on that. While we ran a few songs in November, we learned, and memorized, most of the music in the two weeks before the concert. We received our final pieces the week before. The orchestra and organists were receiving music as late as Tuesday before the performance!

This year’s guests were singer Natalie Cole and David McCullough. She performed a number of her well-known Christmas arrangements, some of them backed up by the Choir. Mr. McCullough wrote a piece on the importance of music in American history that focused on his favorite Christmas carol, “O Little Town of Bethlehem,” and song, “I’ll Be Home for Christmas.” He wove their histories into an incident from WWII when Prime Minister Winston Churchill came to Washington right after Pearl Harbor.  The opening processional, the main production number, and the traditional closing—“Angels from the Realms of Glory”—included hundreds of children from area children’s choirs. 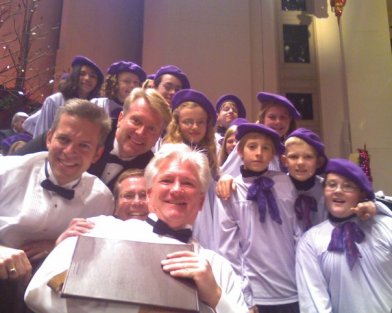 I am biased, but regardless of how talented the guest is (and our guest Sissel a few years ago was stunning, moving, and inspiring with some of her numbers), it is some of the Choir and orchestra numbers that always move me the most. Brother Wilberg always has a traditional slot int he program, as when we sang “For Unto Us a Child is Born” from Messiah this year. Most moving to me was his arrangement of “O Holy Night.” I am almost always moved to tears when we get to the high point of the song, “Christ is the Lord, O praise his name forever!”

And this brings me to the essence of what I want to share about Christmas and music. Whether it is an almost professional concert by the Mormon Tabernacle Choir, our ward’s little choir in our sacrament Christmas program, or my family singing carols at our evening December devotionals, music brings the spirit of the season to my heart stronger than anything else.

For (official) video interviews I have done on the Choir, see “What Singing with the Mormon Tabernacle Choir Is Like” and “Time Commitment of the Choir.” Interviews by choir staff and other choir members can be found at http://www.mormontabernaclechoir.org/pages/Videos