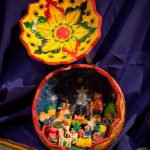 All photos courtesy of Ben Munson

It’s a small object, not a simple one: a Peruvian nativity carving, fashioned inside a gourd from intricate wood figures painted in bright colors. It was on display at the creche festival last weekend; I lingered over it for a moment, pointed out the tiny llama to my children, and moved on long before its meaning had bloomed. The object is a simple commemoration of Jesus’ birth, that much we read on its surface. But it’s also a tale of the complex intersection of Christianity and globalization in the modern world.

Any powerful set of ideas will make several curtain calls in the long drama of history. Christianity has taken the stage in the company of an empire or two, conflicts both local and far-flung, and migrations and social movements of all sorts. In our current scene, Christianity is one of the ideological actors competing to explain and direct an accelerating pageant of globalizing geopolitics.

In a sense, Christianity has been waiting for this historical moment for centuries. Globalization promises a technological marvel: a world of regional economies and societies finally and fully integrated by a globe-girding network of communication and exchange. Expanding global markets, physical infrastructure, and networked electronic media make the peoples of the world more available to one another now than they have ever been. But as a technological process, globalization is sorely inadequate to meet its own grand promise: technology needs narrative to interpret and integrate its meaning into our lived experience. Christianity, and its monotheistic sister religions, provide one narrative, a family story, for understanding the relatedness of humanity in a global age. 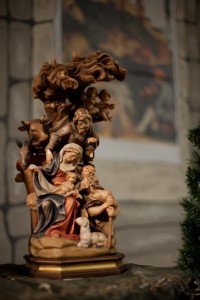 We share one God; God is our father and so we are brothers and sisters; God gave his Son to save all mankind; the good news of Jesus’s gospel is for all the world. This has always been Christianity’s message to the world, and today it speaks to the conflicts and opportunities of this latest stage of human history. It’s all there in the Peruvian nativity, if you look. Global migration and trade offered the image of the infant Jesus to Peru, clothed it in wood, and then offered the wooden object back to North America. In turn the object offers up the meaning of the global trade and travel that produced it, the world in a gourd, the cosmos in the microcosm: the babe in Bethlehem, born a child and yet a king, orients all of heaven and earth together toward the divine logos. Word made flesh, flesh made wood.

It’s not quite as neat as that, of course. Christianity is not a monolith, and different Christian traditions have their own versions of Christian universalism. Those propositional basics of Christianity are not self-interpreting, nor is it obvious that they call for a pro-global worldview; indeed, Christianity has also been used to argue against globalization in favor of localism. Christianity was born in a premodern world—in fact, the very notion of the “blue marble” that has come to symbolize the one-world aspect of globalism was unknown to the authors of the Bible—and it sometimes marries uneasily with the Enlightenment world system of which globalization is a descendant. Still, the ideas are there, they are relevant, and they are being used, one way or another.

There’s a mid-century Christmas carol that was a favorite of mine as a child, and I still love it. Alfred Burt’s “Some Children See Him,” the lyric written by Wihla Hutson, reflects its 1951 vintage in a few descriptive terms that might make us wince a bit today. But its message is as sweet as ever. It’s the message borne by the Peruvian nativity, displayed together with creches from every other corner of the world: Jesus came for all, and we adore him as one. 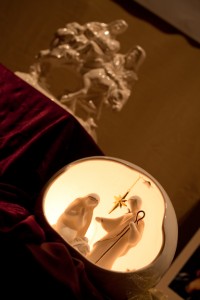 The children in each different place
will see the baby Jesus’ face
like theirs, but bright with heavenly grace,
and filled with holy light.
O lay aside each earthly thing
and with thy heart as offering,
come worship now the infant King.
‘Tis love that’s born tonight!

← A Mormon Image: The View from the Roof
An initial question →

9 comments for “The globe and the gourd: Christianity in a global world”