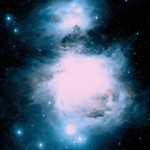 As I’ve mentioned before, Mormons don’t follow the traditional liturgical calendar, but that won’t stop me from using this January 6, the twelfth day of Christmas and the feast of Epiphany or Three Kings Day, as a happy occasion to put up the one last Christmas post that escaped December. (It’s also a great reason to enjoy my Christmas decorations—and avoid the chore of taking them down—for just one… more… night.)

Several days before Christmas I attended a concert by the St Louis Chamber Chorus at the Cathedral Basilica. I’ve attended this concert most years that I’ve lived in St Louis, and it’s always a spiritual highlight of my season. This year’s program was a counterpart to last year’s: the 2008 concert was titled “An Old World Christmas”; this year’s was “A New World Christmas.” The choir’s artistic director Philip Barnes designed a thoughtful program spanning the breadth of American—North and South—history, geography, religious variety and musical idiom.

The project interested me on a conceptual level, and as I listened to the music I wondered whether there were any unifying theme, any identifiable “new world” flavor imparted to the Nativity. There isn’t, really, at least none that I could discern: American composers represent too motley a group, and too entwined with the old world, to really coalesce around a unified hemispheric approach. But the program was nevertheless tied together by a kind of cultural hybridity, an ugly but useful graduate school term for the fruitful interchange between an old story and a new context. In a piece like Healey Willan’s “The Three Kings,” appropriate for this Epiphany, an American musical vehicle carries a lovely text by the English poet Laurence Housman, recounting the old Matthean story, and the result is musical gold, frankincense and myrrh.

The idea of a new world Christmas engaged me for other reasons, as well. The Book of Mormon is a new world artifact with strong old world ties, no matter one’s view of its provenance, and the notion of cultural hybridity is central to understanding it on any level. As it happens, the birth of Christ features significantly in the narrative, as a prelude to the text’s central event: the appearance and ministry of Christ among the people of ancient America. The Book of Mormon can be a difficult text, at first: it is long, narratively complex, and stylistically remote from most readers. So I thought I would offer up a bit of the book, its new world Christmas, for curious readers. I’ll excerpt two passages: the first taken from the prophecy of Samuel, a Book of Mormon prophet who foretold Christ’s birth a few years before the event, and the second recounting the miraculous events in the new world—that is, the ancient American setting of the Book of Mormon—on the night of Christ’s birth in Bethlehem. First, from Samuel:

“Behold, I give unto you a sign; for five years more cometh, and behold, then cometh the Son of God to redeem all those who shall believe on his name. And behold, this will I give unto you for a sign at the time of his coming; for behold, there shall be great lights in heaven, insomuch that in the night before he cometh there shall be no darkness, insomuch that it shall appear unto man as if it was day. Therefore, there shall be one day and a night and a day, as if it were one day and there were no night; and this shall be unto you for a sign; … and it shall be the night before he is born.

“And behold, there shall a new star arise, such an one as ye never have beheld; and this also shall be a sign unto you. And behold, this is not all, there shall be many signs and wonders in heaven. … And it shall come to pass that whosoever shall believe on the Son of God, the same shall have everlasting life.” (Helaman 14:2-8)

Later, the narrative recounts a miraculous fulfillment of Samuel’s prophecy, including the voice of the Lord to the prophet Nephi on the eve of his birth, saying:

“Lift up your head and be of good cheer; for behold, the time is at hand, and on this night shall the sign be given, and on the morrow come I into the world, to show unto the world that I will fulfil all that which I have caused to be spoken by the mouth of my holy prophets.”

For Mormons, the imagery in this episode—the new star, the brilliant night, the rising of the sun in its proper order—is memorable and meaningful, related to the beloved Biblical account and sharing in the same deep symbolic language of cosmic light and life. And its night-as-day adds another witness to the gospels, another testament of Christ’s divine person and his saving role.

In many ways this new world Christmas is thematically more at home today, Kings Day, and with Matthew’s account of the kings’ progress and worship, than it is with Luke’s infancy narratives on Christmas Day. The important ideas are signs of Christ, prophecies of Christ, and the sure fulfillment of those prophecies: just as the wise men from the east studied the prophecy, saw the sign and sought the King, so the ancient American prophets and disciples studied, saw and sought.

And these passages highlight an important nuance in the Mormon notion of revelation. Some Christian traditions understand revelation to be incarnate, embodied in the person of Christ, God’s ultimate communication to mankind: we might pair this idea with Luke’s infancy account, with its emphasis on the sacred mystery of Christ’s humble birth as a defenseless infant. Mormons, with others, understand revelation to be discursive, something closer to scripture or prophecy, a specific teaching that, crucially, prepares for and points toward Christ. This idea pairs nicely with Matthew’s—and the Book of Mormon’s— emphasis on the fulfillment of Jewish scripture in the birth of Christ. It also illustrates the extent to which the importance of prophets in Mormon teaching is understood to serve, never to compete with, the centrality of Christ for our salvation.

Happy Epiphany, all, whether in the new world or in the old. This year may you study, seek and find with the Kings.

“Who knocks tonight so late?”
the weary porter said.
Three kings stood at the gate,
each with a crown on head.

The serving man bowed down,
the Inn was full, he knew.
Said he, “In all this town
is no fit place for you.”

A light in the manger lit;
there lay the Mother meek.
This place is fit.
Here is the rest we seek.

Come, come. They loosed their latchet strings,
so stood they all unshod
“Come in, come in, ye kings,
and kiss the feet of God.”

7 comments for “A New World Christmas”