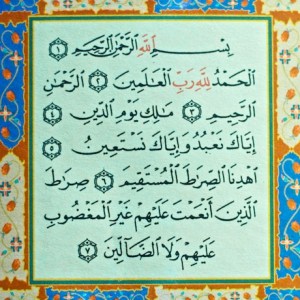 The several parallels between the Book of Mormon and the Qur’an have been noted before: the Qur’an serves as proof of Muhammad’s prophethood, an additional (although superseding) witness of the Bible’s God and salvation history, the source of devotional reading and instruction for believers. It is central to the piety of Muslims and commands their highest esteem. For non-believers to glibly dismiss it offends Muslims the same way we take umbrage when the Book of Mormon is described as something any nineteenth-century, Bible-literate yokel could have tossed off between lunch and dinner.

In other ways, though, the Qur’an is simply sui generis, and to understand it only by comparing it with other sacred texts is to sell it short. For one thing, the Qur’an has long been considered the model of literary excellence in Arabic; the inimitability of its style is an article of faith. For all its other merits, the Book of Mormon hasn’t exactly been widely followed as a paragon of style, even by believers. And nothing in the LDS view of scripture quite parallels the Islamic view of the Qur’an as uncreated, co-eternal with the Creator (God “inlibriate” as one scholar has put it).

But those are topics for another time. My hope today is to promote appreciation for three facets of the Qur’an.

(1) The Qur’an is a complex text. It was compiled over a period of more than 20 years, and the diverse content of the various suras (sections) reflects the changing circumstances of the nascent Muslim community. (Be aware, though, that the canonical order of the suras does not reflect chronology but rather inverse order of length.) It contains great stylistic variety: some suras are characterized by a lyrical beauty and others by pithy, legalistic prose.  Like any complex text, its message is not reducible to discrete verses or proof texts; some familiarity with the whole is necessary for an understanding of each part. Narratives, for example, are often presented in fragmentary form and must be cobbled together from various passages (the story of Joseph in Egypt in Sura 12 is a notable exception).

Qur’anic language is challenging and sometimes elusive in meaning. Some of this may be attributed to the polysemous nature of Arabic word roots, but some may be inherent in the subject matter. The interpretive challenge of the text gave rise to a rich exegetical tradition with diverse modes of interpretation—linguistic, legalistic, rationalistic, and mystical.

(2) The Qur’an is beautiful. For believers, the aesthetic dimension of the text is inseparable from its spiritual power. Qur’anic language is at once ancient and contemporary. It mixes the cosmic and the intimate in striking ways. Consider this translation (Yusufali) of Sura 93 (“The Morning Light”), a message of comfort given to Muhammad in a moment of distress:

By the Glorious Morning Light
And by the Night when it is still—
Thy Lord hath not forsaken thee, nor is He displeased.
And verily the Hereafter will be better for thee than the present.
And soon will thy Lord give thee that wherewith thou shalt be well-pleased.
Did He not find thee an orphan and give thee shelter and care?
And He found thee wandering, and He gave thee guidance.
And He found thee in need, and made thee independent.
Therefore, treat not the orphan with harshness,
Nor repulse the petitioner unheard;
But the bounty of the Lord—rehearse and proclaim [it]!

In discussing the beauty of the Qur’an, I should also mention the seminal impact the Qur’an has had on the Islamic arts, including the marvelous calligraphy and illumination tradition—in its pen-and-ink varieties, as well as in plastic, architectural ornamentation (as here from the Mosque of Ibn Qalawun in Cairo).

3) “Qur’an” means “recitation.” Much of the impact of the Qur’an comes from experiencing it orally/aurally. The rhyme patterns, the nasalized consonants, the elongated vowels—these are an integral part of the experience. To give you a sense of what I mean, I encourage you to go to one of the sites that allow one to read and listen to passages of the Qur’an. (This one has worked well for me.) Listen to Sura 1 (the “Opening”) and read it in translation. This sura is recited by Muslims every time they perform their ritual prayer. Then do the same for Sura 93 (translated above). Listen for the features of Qur’anic prosody. Select another reciter (from the drop-down menu near the top) and note differences in tone and inflection. Even without a knowledge of Arabic, one can get a taste of how believers experience the text and why this experience is powerful for them.

(Those who are linguistics-minded may enjoy this Qur’an corpus site, which has word-by-word syntactic and morphological analysis. For those interested in reading the entire Qur’an, Arberry’s translation is highly regarded. The more recent Abdel Haleem translation is also quite serviceable and has a useful introduction.)

As Latter-day Saints, we should appreciate the best of other religious traditions—if for no other reason than that we can empathize with the feeling of being misunderstood. In addition, we have an inspiring mandate to seek wisdom out of the “best books” (D&C 88:118). I include the Qur’an in this group.

72 comments for “Appreciating the Qur’an”