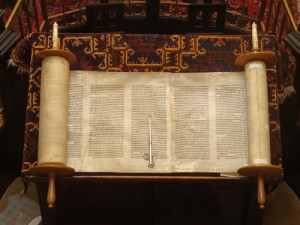 Every four years we have a celebrated ritual during the second hour of church: it is the discussion by all members present on the topic of being uncomfortable studying the Old Testament.  Sometimes this broadens to statements such as “I just don’t get why we read it” or “It has a lot of stories with morals, but how does it lead us to Christ?” It’s striking how we often take the Old Testament to be something akin to the apocryphal works (see D&C 91). In celebration of this quadri-annual event my wife and I have stayed up late discussing all of reasons we passionately love the Old Testament.

As we did so, our conversation soon turned to the connection between all of the ordinances that we practice in Mormonism and their basis in the Old Testament (we can’t really think of one that is not based in the Old Testament; maybe the Gift of the Holy Ghost?). We then began to discuss aspects of the LDS church that are unique to us in the Christian arena. Bushman put it eloquently when he said:

Ironically, many of the most distinguishing features of Mormonism are Hebraic.  In a sense, Mormonism differentiated itself from Christianity by returning to Christianity’s roots in the religion of ancient Israel.  Joseph Smith claimed to have recovered the Hebrew priesthoods of Aaron and Melchizedek and to have revived the prophetic tradition of Moses and Isaiah.  Going back to the rituals of ancient Israel, Smith restored temple worship under the direction of a sacral priesthood.  Smith even adapted instructions for ordaining priests in the book of Exodus for portions of Mormon temple rites.

Throughout Smith’s life, the Old Testament was a major source of inspiration.  His restoration can be thought of as a purging of Hellenistic influences in Christianity and reviving the Hebraic.  When he undertook to educate his unlearned followers, Smith passed over the classical languages and hired a Jewish instructor to teach them Hebrew.  In the end Joseph Smith’s restoration pressed Christianity into an Old Testament mold. (Mormonism: A Very Short Introduction, 62-3)

Below is a quick list we drew up of Mormonism’s “reviving the Hebraic.” We are hoping that you can add to this list and help us revive a genuine passion for this truly foundational book of scripture. We can all disseminate this passion next week in Sunday School as we joy in the choices of Eve.  Let’s continue the revolution began by Joseph Smith and being carried forth today by Jim Faulconer and others to make the Old Testament a revered book rather than the red-headed stepchild of our canon.

9. Dispensational history
10. Conversion as literal adoption, including blood change (e.g., Ruth, gentile convert and great-grandmother to King David)
11. Prophets (there’s a lot to say here, but our fallible, fully mortal, but divinely appointed notion of a prophet is all throughout the OT, and rarely seen in Christianity)
12. Commandments as a blessing (see D&C 59:4); the Christian understanding transforms the notion of commandments into a taskmaster at best, or utter vanity at worst
13. And finally, just for fun, there’s circumcision. Ok, ok, so it’s not exactly a religious practice for us, but it certainly predominates in our culture, and you just don’t get more OT than that!

← Shape-Shifting Lizards — Could They Be in Your Ward?
Church + Music = Fun →

15 comments for “Reviving the Hebraic”