Times and Seasons has selected Harry Reid as Mormon of the Year for 2009.

During 2009, Senate Majority Leader Harry Reid was the most visible and influential Mormon politician in the world, shepherding Democratic legislative proposals through the U.S. Senate after the party’s victories in the 2008 elections, including a landmark health care bill that represents one of the more controversial pieces of legislation to pass through the Senate in recent memory. Reid’s off-the-cuff style has also led occasionally to unscripted remarks that have attracted a lot of attention.

While Reid’s faith is not always discussed as much as that of other Mormon politicians, he remains an active member of his ward. In recent years he has helped the Church on some crucial issues, including helping to broker a compromise over Martin’s Cove. Reid spoke openly about his faith in a 2007 address at Brigham Young University and touched on his conversion and beliefs in his recently published memoir. A fixture in Nevada politics who has dedicated his life to public service for decades, Reid has long advocated that one can consistently be both a Democrat and a Mormon. 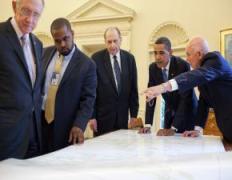 Times and Seasons has covered Harry Reid before. You can see a list of posts that mention Reid here. However, given Reid’s continuing political position and assumed aspirations, this recognition should not be seen as an endorsement of his political positions or aspirations.

The Mormon of the Year designation is a recognition of the effect that the person or group of persons recognized has had during the past year. It is not a prize or award, so nothing of value is being given to anyone as a result of this designation, and it is not necessarily meant to honor the person or persons recognized, so no effort will be made to contact or notify Reid.

We were very pleased by the interest in selecting the Mormon of the Year. The Times and Seasons readers nominated 20 possibilities in addition to the original 5 in the post. We learned a lot from those nominations, especially the range of our readers’ beliefs and feelings. We even learned about some Mormons who have done significant things and really deserve to be on a list of possible Mormons of the Year.

The LDS Church’s First Presidency (including the Prophet) and Quorum of the Twelve Apostles were excluded from nominations because their overwhelming influence would mean their selection every year. In many ways each of them, and especially the Prophet, are always the Mormon of the Year.

We also appreciate those who dropped by and participated in our online vote, which taught us a lot about the passion that many people have for their friends and those that they admire. Nearly 2,000 people voted in our poll, often coming from outside the bloggernacle, from fan sites associated with some of those nominated. We hope that those who dropped by enjoyed Times and Seasons and will drop by again.

Please plan on participating in next year’s Mormon of the Year nominations and designation. I’m sure that many of the nominees will show up in next year’s process, and those of us who were unfamiliar with some of the nominees can use that time to become more familiar with them. Certainly we will re-nominate some of them next year, if others do not. And, as we discovered this year, each year is very different, bringing a different mix of both news and candidates.