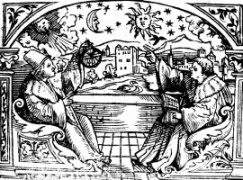 Glenn Beck, the soapbox orator of cable television, has done more, save Sheri Dew only, for the greatness of Mormon literature, than any other person that ever lived.

What’s irritating about this is not just the tiresome discussion of what truly qualifies as Literature and who truly qualifies as Mormon, but that it overlooks entirely how ‘greatness’ in literature is constructed. Mormons can determine the boundaries of Mormonness, and just about any sequence of words on paper can be construed as literature, but literary greatness is largely out of our control, with the consequence that the Mormon literature that attracts the notice of book critics for the New York Times is most often the kind of Mormon literature that is comprehensible to them: exit narratives.

Which brings us to Glenn Beck. I’ve never watched his television program, but I gather that he says controversial things, and that I would likely disagree with his political views. Beck has, however, used his platform to promote books that he likes, so much so that he’s become something like the Oprah of thriller novels, and publishers are starting to notice. I have no idea if any of the Beck-promoted novelists are Mormons, or if there is any recognizably Mormon aesthetic in Beck’s selections, so what he has done so far for the greatness of Mormon literature might not amount to much at all—except he’s created a position for himself where he has the ability to do so, which is more than just about anyone else has done.

Which brings us to Sheri Dew. She has led Deseret Book for the past several years, including the expansion of its Shadow Mountain imprint into a force on the national market for midgrade novels. Shadow Mountain has launched the careers of a number of authors, its books are widely sold at retail centers and airports near you, and the books are in some respects recognizably Mormon products. Sheri Dew has both achieved a position of influence in the field of midgrade novels, and used it to promote (among other things) Mormon authors and books that incorporate some Mormon elements.

Which doesn’t mean that Shadow Mountain books are necessarily great. I often read midgrade books, but the ones from Shadow Mountain that I’ve looked at have suffered from the plague of wacky characters and situations that commonly afflicts midgrade novels, and which has the effect of sucking all the tension from the story and lowering the stakes to ground level. (If you want to know how it should be done, take a look at Brandon Sanderson’s Alcatraz series. I don’t love the wacky elements, but they turn out to be essential to the plot, not merely thrown in to keep the kiddies laughing.)

There are a lot of really good Mormon authors out there right now, and they’ve proved that there is serious money to be made from using Mormon elements in fiction. But the people who decide what constitutes greatness in literature aren’t Mormons, and often dismiss elements of the Mormon aesthetic, such as premarital chastity, as mere oddities or acute menaces to right-thinking hedonists everywhere. To make Mormon literature great, we need people who hold positions of influence in the world of books. Mormonism won’t have its Shakespeare until it has its Edmund Wilson and Maxwell Perkins. For now, we have Glen Beck and Sheri Dew.

54 comments for “How to make Mormon literature great”