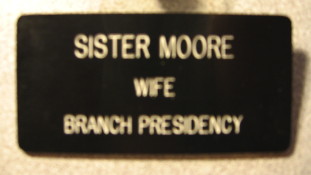 There is a long-standing tradition in the church to use honorific titles identifying priesthood positions for men at just about every level beginning when they become missionaries. Elder, Bishop, President.

Women — even those who hold similarly named positions — are generally referred to as simply “sister.” In my 45 years in the church, I can recall less than a handful of times when a woman was referred to by title.

When I was 19 we moved to England while my dad took a sabbatical from BYU. My mom soon made a dear friend in the mission president’s wife. We spent hours and hours helping her fulfill her various duties. (My mom out of friendship, me out of a desire to hang out with cute missionaries.) This was more than a full time job.

Upon returning home, I started paying attention to the Church News announcements of new mission presidents. The notices generally told about the man who’d been called, what his career was, what callings he’d held — and ended with something like, “President Jones is married to the former Mary Johnson.”

Years later the husband of a friend was called to serve as a mission president. As I witnessed the preparations to leave for three years, packing up an entire home, learning a new language, leaving friends and family, it was obvious that the woman was making as serious a commitment as the man. But she wasn’t given a calling or title to go with it. In fact, her service was barely recognized other than her support role.

When temple presidents are called, the wife is called the “matron.” I suppose that’s a title (although I’ve never heard anyone in such a position addressed as “Matron Thompson”), but really it just means “sober, middle-aged, married woman.” Which is kind of like giving a guy the title of “geezer.”

When I was in high school my dad was called to be a bishop in a married student ward. My mom was the ward mother, attended both our ward (because I was still at home) and my dad’s ward (as requested). She served tirelessly there, without recognition.

When I was in college, Dad was called to serve as a branch president at the MTC. My mom was expected to attend and serve, and she did. My dad was given a missionary name tag. So was my mom. Hers said, “Sister Moore — Wife — Branch Presidency.”

In the past, whenever I’ve asked someone about this disparity, the answer I get is generally one of these:

When I served as a Relief Society president, I was never called President Smith. But I was really too busy to worry about it. But if titles really don’t matter, then why do we use them?

I guess the real question is: Why do titles matter for men, but not for women?

← T&S Introduces Dane Laverty as its Newest Blogger
A Mormon Image: Joy On A Cattle Truck →