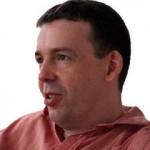 Last week a friend invited me to attend a lecture sponsored by the  SLU Theology Club and featuring James Alison, a Roman Catholic priest and theologian.  Alison grew up in Britain, was raised in a low-church Protestant tradition, converted to Catholicism, and now resides in Belo Horizonte, Brazil, living as an openly gay Catholic and working with AIDS patients.

The talk was to be titled “The Gift of the Spirit and the Shape of Belonging: Meditations on the Church as Ecclesial Sign.”  Even more promising: Catholic ecclesiology shares something in common with its LDS counterpart, inasmuch as both traditions revere an ecclesiastical hierarchy and value orthodoxy, and I hoped that Alison’s remarks might offer a wavy mirror on the shape of my own belonging.

I was not disappointed.  Alison opened by observing that ecclesiology, or contemplation of the church as an institution, is always a “broken-hearted” discourse, informed by communal contrition and enlivened by love infused with great pain.  He connected a broken-hearted ecclesiology with the sacrament of baptism: we enter the church by way of a symbolic death, and that humble entrance should inflect the way we inhabit the institution—that is, with humility, not triumphalism.

This struck me as  a profound reading of the sacrament of baptism. Alison’s subtext, it seemed to me though it was never mentioned explicitly, was both his experience as a gay men in the church as well as the turmoil surrounding the sex abuse revelations. But the larger point is pertinent to any individual with deep personal commitments to a human institution—even a human institution striving to signify Christ in the world—that necessarily reflects and transmits the frailties of its human limbs.  We love the institution for what it gives to us and what it allows us to give, but we do so with a broken-hearted awareness of its imperfections.

In the remainder of the talk, Alison set himself a challenging task, as I interpreted it: to work out a social position within the church that accommodates a certain kind of critique, but at the same time remains reconciled to church leadership and authority. He accomplishes that double feat first by gently diminishing the importance of the episcopacy in the spiritual life of the laity, emphasizing the role of the church hierarchy as the servant of Christ’s body rather than its ruler. The magisterium exists to make possible our ordered response to Christ’s call, he suggested, not to order us around.

But the central element of that ordered response to Christ is what Alison called a “huge anthropological shake-up—a new ‘we.'”  By this he means a new kind of community, the engine of which is not a human-typical exclusion of the despised, whether ritually or sociologically, but rather the crucified and risen Lord present among his disciples.

At first this sounds very similar to the liberation theologies of the late twentieth-century. But Alison’s message of inclusiveness is both more rigorous and more encompassing, for it requires reconciliation not only to the lowly but also to the lofty.  The “new we” must not become an “old we” by substituting a villified hierarchy for the old villain; there must be genuine unity, genuine relationality, among all the members of Christ’s body.

This is true even when we feel genuinely aggrieved by an action or a teaching of the hierarchy—especially when we feel thus aggrieved, according to Alison.  A sense of aggrieved victimhood is the death of self-criticism, and a self-critical subjectivity is vital to what Alison called “taking responsibility for our own belonging.”  No reflexive blaming of the hierarchy while claiming a moral advantage; we must come to Christ first with a sense of our fallibility.

This does not mean there is no possibility for a sociological critique. On the contrary, Alison suggests that the church, tragically and by historical accident, not malice, lacks a “self-critical institutionality,” and that the development of such a discourse is important to the church’s ongoing work.  But the possibility of that discourse is premised upon the “new we,” a fully reconciled community free from alienation and recrimination.

11 comments for “James Alison and the reconciled discourse of dissent”