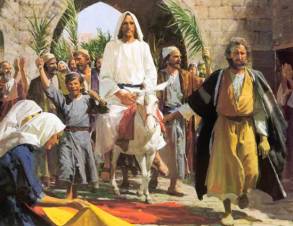 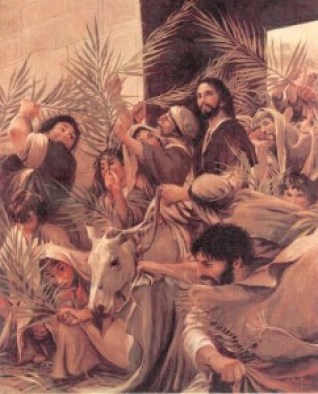 As noted in yesterday’s post, Mary’s anointing of Jesus in John 12:1–3 can be taken as representing a regal anointing, in which case the events of the next day emphasize Jesus’ role as the true king of Israel.

This becomes apparent in all four gospel accounts, where, on the last Sunday of Jesus’ life, he entered Jerusalem in triumph. John, for instance, notes the following:

On the next day much people that were come to the feast, when they heard that Jesus was coming to Jerusalem, took branches of palm trees, and went forth to meet him, and cried, “Hosanna: Blessed is the King of Israel that cometh in the name of the Lord.” And Jesus, when he had found a young ass, sat thereon; as it is written, “Fear not, daughter of Sion: behold, thy King cometh, sitting on an ass’s colt.” These things understood not his disciples at the first: but when Jesus was glorified, then remembered they that these things were written of him, and that they had done these things unto him. (John 12:12–16).

The four gospel accounts differ only slightly. The Synoptics, for instance, give greater detail as to how Jesus obtained the donkey on which he rode during his triumphal procession. Luke depicts it as a triumphal approach to Jerusalem, with Jesus stopping some distance from Jerusalem to mourn and lament the city from afar before he entered the holy city (19:41–44).  While a donkey does not seem to modern readers to be a very regal mode of transportation, one must remember that it was commonly the conveyance of Old Testament kings, especially David. The waving of tree branches (only John mentioned that they were palm fronds) is often associated with Sukkot, the autumn festival of Tabernacles that commemorated the wandering of the children of Israel in the wilderness. Once in the Promised Land, however, it became above all a harvest festival, but it was also associated with the coronation of the Israelite king and in the intertestamental period developed messianic connections. 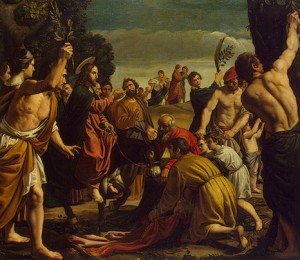 Palm Sunday is a good opportunity to recall one of the rare moments in Jesus’ ministry when he was recognized for the king he was. But depending upon the timing of Passover and the day that Jesus was crucified, this Sunday could also have been “fifth day before Passover” when the Paschal Lamb was selected for Passover and set apart for the Lord, giving special significance to crowd’s recognition of Jesus on this day—they may have been welcoming him as a hoped-for king, but in reality he had come as the Lamb of God who would die for them.

Only John gives a reason why the Jerusalem crowds seemed so united in welcoming Jesus as the possible Messiah: they had heard about the great miracle that he performed in raising Lazarus (John 12:17-12), which of course foreshadows Jesus’ own conquest of death. This explicitly connects the Triumphal Entry to Jesus’ resurrection. It also, however, gave further cause for opposition. John 12:19 notes that “the Pharisees therefore said among themselves, ‘Perceive ye how ye prevail nothing? behold, the whole world is gone after him.’” Earlier they and the “chief priests” had, as a result of the raising of Lazarus, already begun to take counsel about how they could put Jesus to death (John 11:47-53).

Consequently, Palm Sunday is also an occasion to look forward to Jesus Christ’s final, triumphal return when all the world will recognize him as Lord and King.  Having conquered death, he will, in due course, return to Jerusalem—and all the earth—in glory.

And [they] brought the ass, and the colt, and put on them their clothes, and they set him thereon. And a very great multitude spread their garments in the way; others cut down branches from the trees, and strawed them in the way. And the multitudes that went before, and that followed, cried, saying, Hosanna to the Son of David: Blessed is he that cometh in the name of the Lord; Hosanna in the highest. And when he was come into Jerusalem, all the city was moved, saying, Who is this? And the multitude said, This is Jesus the prophet of Nazareth of Galilee. (Matthew 21:7-11) 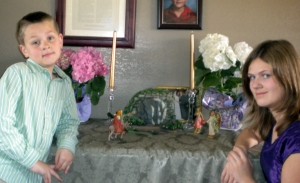 Samuel and Rachel on Palm Sunday, 2010

The joy of the triumphal entry is perhaps best expressed in our modern hymn, “All Glory Laud and Honor.”

All glory, laud, and honor
To thee, Redeemer, King,
To whom the lips of children
Made sweet hosannas ring.
Thou art the King of Israel,
Thou David’s royal Son,
Who in the Lord’s name comest,
The King and Blessed One.

The company of angels
Are praising thee on high,
And mortal men and all things
Created make reply.
The people of the Hebrews
With palms before thee went;
Our praise and love and anthems
Before thee we present.

To thee, before thy passion,
They sang their hymns of praise;
To thee, now high exalted,
Our melody we raise.
Thou didst accept their praises;
Accept the love we bring,
Who in all good delightest,
Thou good and gracious King. (Hymn 69)

In Matthew and Luke, as Jesus enters Jerusalem, he proceeds directly to the temple, where, in a familiar scene, he cast out the moneychangers and those who were selling sacrificial animals in its outer courts. Mark delays this scene until Monday for symbolic and literary reasons, while John had recorded a cleansing of the temple at the beginning of his ministry (John 2:13–25). Either there actually were two different cleansings, or John had moved it to the front end to illustrate that Jesus was always sovereign—he always had the authority and right to do what he did. For the Synoptics, however, the cleansing can be directly connected with a royal interpretation of the Triumphal Entry. From the time of Solomon until the destruction of the First Temple by the Babylonians, the temple had been, in effect, a royal chapel adjacent to the king’s palace. There he was coronated and “adopted” as a son of YHWH (see Psalm 2:7), a clear type and foreshadowing of how Christ was not only the rightful king but also the actual Son of God.

Jesus’ rebuke of the temple authorities, that they had made his Father’s house “a den of thieves” (Matthew 21:13; Mark 11:17; Luke 19:46), may explain part of His anger.  The term “thieves” here comes from the Greek l?istai, which not only means “robber” or “bandit,” but also “revolutionary” or “insurgent.”  The temple leadership in this period was notoriously corrupt, so his rebuke may not have been just of the moneychangers and the merchants themselves but also of the temple leadership who was allowing, and perhaps profiting, from what might have been necessary activities. For over two centuries the high priests had been political appointees rather than coming from the appropriate priestly family.  Consequently, Jesus’ rebuke of the leadership as “insurgents” might suggest that he was unmasking them as false authorities who had usurped power over the sanctuary and were misusing their assumed positions. 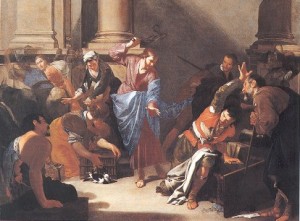 Bernardo Cavallino, "Christ driving the traders from the temple," c. 1645

If one connects the Triumphal Entry with Jesus’ eventual return, the cleansing of the Temple can be seen as the eventual “cleansing of the earth” and especially Jerusalem and the establishment of Jesus’ reign there.

← For the Saturday before Holy Week: The Symbolism of Jesus as Anointed King and Priest
A Mormon Image: Baby in the Cupboard →