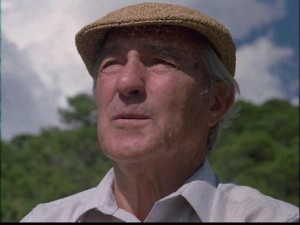 Stewart Udall, U.S. Secretary of the Interior under Kennedy and Johnson and a prominent member of a prolific Mormon political dynasty, passed away Saturday morning at his home in Sante Fe, New Mexico, according to a statement from his son, Senator Tom Udall. Known affectionately as “Stew,” he was ninety years old and the last surviving member of Kennedy’s original cabinet.

While he did not remain an active Latter-day Saint in his later life, he nevertheless kept close ties with the Church and continued to self-identify as a Mormon, claiming that he was “Mormon born and bred, and it’s inside me… I prize my Mormon heritage and status.” More than that, throughout his adult life he served as an important intermediary for the Church on both political and religious matters.

Stew was the son of former Arizona Supreme Court Justice Levi S. Udall. He was born in the small town of St. Johns, Arizona in 1920 and attended the University of Arizona before leaving on a mission to the Eastern States in 1940. After his mission, Stew enlisted in the Air Force, serving as a B-24 gunner and flying fifty missions over Europe during World War II. Upon returning from his service, Stew attended law school at the University of Arizona, graduating in 1948. He also married Ermalee Webb that same year, his life-long companion with whom he had six children.

In the 1950s, Stew entered politics and was elected in 1954 to the U.S. House of Representatives, where he served until John F. Kennedy appointed him U.S. Secretary of the Interior in 1961 (after Stew helped turn the state out for him in the 1960 election). As a congressman, Stew was a strong supporter of environmental and civil rights legislation. Once appointed as cabinet secretary, he actively used his position to support environmental issues. Among his political accomplishments, he helped to guide numerous landmark environmental measures through Congress, including the Wild 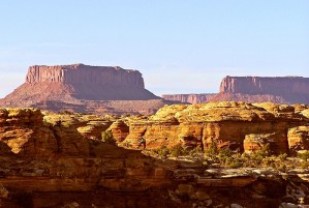 erness Act of 1964, the Land and Water Conservation Fund Act of 1965, the Endangered Species Preservation Act of 1966, the National Trail System Act of 1968, Solid Waste Disposal Act of 1965, the Wild and Scenic Rivers Act of 1968, and the Clear Air, Water Quality and Clean Water Restoration Acts and Amendments. He also helped to expand the National Park Service to include “four new national parks, six new national monuments, eight seashores and lakeshores, nine recreation areas, 20 historic sites and 56 wildlife refuges.”  Some of these additions include “Canyonlands National Park in Utah, North Cascades National Park in Washington, Redwood National Park in California and the Appalachian National Scenic Trail stretching from Georgia to Maine.”  As a result of these successes and his life-long advocacy of environment and conservation issues, Stew has become an icon of sorts within these movements. Indeed, his passing has brought with it a flood of condolences from leaders at every level of government.

After Johnson left office in 1969, Stew taught for a time, authored several books, and continued to champion environmental issues, leading a high-profile legal crusade on behalf of the victims of radiation exposure from Cold War-era nuclear programs.  While his lawsuits failed in court, they led to the enactment of the Radiation Exposure Safety Act in 1990 (which Stew helped to write), that compensated thousands of Americans affected by the exposure.

Of his public service, Stew said “I was taught that a person may aspire to nothing higher than to be a public servant.”  And this certainly was reflected in the lives of the Udall family, whose political reach has been tremendous. In addition to a father and an uncle who served on the Arizona Supreme Court, Stew’s brother Morris (“Mo”) was elected in Stew’s Congressional District after his appointment as Secretary of the Interior. Mo himself became a legendary force in politics, eventually challenging Jimmy Carter for the 1976 Democratic presidential nomination.  Stew’s son Tom was a five-term congressman from New Mexico who was elected to the Senate in 2008.  Mo’s son Mark was a five-term congressman from Colorado who was also elected to the Senate in 2008. Stew’s nephew Gordon Smith was a two-term Senator from Oregon. And Stew’s cousin, Rex E. Lee was Solicitor General during the Reagan administration.

Stew and the Church

Stew was the oldest son in a very active Mormon household (Stew’s dad was Stake President throughout his youth until he was elected to Arizona’s Supreme Court in 1946). Stew remained active himself until well into his twenties. In a fascinating interview with James W. Ure published in Leaving the Fold: Candid Conversations with Inactive Mormons, Stew talked at length about his relationship with the Church, noting that his parents had instilled in him a strong allegiance to the Church.

Stew spoke highly about his mission, saying “I look back on my missionary experience as fruitful experience. I got a lot out of it, and I came away with warm feelings toward the church.” He actively participated in institute while at the University of Arizona (both before and after the war), and cites two institute teachers, Lowell Bennion and Sterling McMurrin, as formative influences on his life. His wife Ermalee came from a similar Mormon background and they “had pretty much the same experience and attitudes with the Church… neither of us was ever devoted church-goers; we maintained our ties, but didn’t participate much.” While four of Stew and Ermalee’s six children chose to be baptized, Stew said they didn’t press the Church hard as parents “[s]o our children haven’t had strong ties with the Church, but they haven’t drifted over to other Churches.” Regarding his relationship with the Church in his later years, Stew said “I’ve never had any desire to sever any ties; in fact, some of them have grown stronger these last years.”

Stew’s strong connection with the Church was very cultural. When asked about his belief in the story of Joseph Smith and the gold plates, he said “I don’t go out of my way to wrestle with that—the kind of thing that to me is not the heart of Mormonism.” In assessing allegations of whether or not he was a “good Mormon,” he would say “I’m my own unique kind of Mormon and I’ll stay that way. So don’t you pass judgment on me, and I won’t on you.” 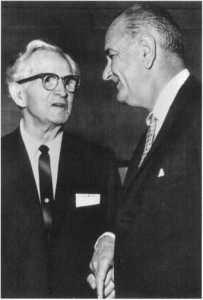 While serving in political office, particularly during his time as a Cabinet Secretary and confidant to Presidents Kennedy and Johnson, Stew served as an ambassador and a point of contact for the Church within the administration. Stew accompanied Kennedy to his landmark speech at the Salt Lake Tabernacle in 1963, and in September 1964, while on a trip to the West Coast with President Johnson, he remembered helping to set up an unscheduled trip to see David O. McKay in Salt Lake: “President [Johnson] decided that he wanted to stop off that night or the next morning, I forget which it was, to see David O. McKay…. And this was all put together in a matter of a few hours, which really made him scramble. But he said, ‘I’d like to see him, let’s stop.’” (Incidentally, of this visit, President Johnson said “I could not fly over Utah without stopping to see President McKay… I always feel better after I have been in his presence.”)

In his interview with Ure, Stew spoke of counseling with some prominent Mormons during his career, and on occasion he would intervene on behalf of members and family. He proudly noted that he had a hand in starting Rex E. Lee’s career, “[Rex] was one of the first law clerks for [Supreme Court] Justice Byron White [who was] one of my friends.”

Stew also played a critical role in helping to spur a reconciliation between descendants of the Fancher-Baker party attacked at Mountain Meadows, descendants of John D. Lee, the sole person executed for the massacre there, and the Church. Stew’s mother was John D. Lee’s grand-daughter, and it was a legacy Stew said she always struggled with. After being approached by Verne Lee–an active Latter-day Saint and Fancher party descendant– about bringing the families together to help “bury the dead and bury the issue,” Stew said he went out of his way to help.  He even arranged a meeting with President Gordon B. Hinckley to ask the Church to be a part of the proposed reconciliation. These efforts culminated in the erection of a monument, paid for by the Church, at the site of the massacre in 1999, with a dedication ceremony involving descendants of both the victims and the perpetrators. At a special reinterment ceremony the day before the monument’s dedication, Stew, “with great emotion,” read a poem he had written years earlier and dedicated to the memory of his mother:

Blacks and the Priesthood

During the 1960s, Stew also lobbied the Church regarding its policy on blacks and the priesthood, first behind the scenes, then publicly. In 1961, he discussed the issue in a meeting with David O. McKay and the First Presidency.  That same year, he also wrote McKay’s counselors in the First Presidency, Presidents Henry D. Moyle and Hugh B. Brown, expressing his worry over the Church’s position: “I am deeply concerned over the growing criticism of our church with regard to the issues of racial equality and the rights of minority groups…. It is my judgment that unless something is done to clarify the official position of the church these sentiments will become the subject of widespread public comment and controversy.” In 1963, after David O. McKay declined an invitation by John F. Kennedy to attend a meeting of religious leaders to discuss his proposed civil rights legislation, Udall again exchanged letters with Elder Brown with his concerns. In 1967, Stew decided to go public with his concerns, publishing a letter to the editor in Dialogue urging that the priesthood restriction be lifted: “Every Mormon knows that his Church teaches that the day will come when the Negro will be given full fellowship. Surely that day has come.” Before the issue of Dialogue went to print, Stew sent a copy to David O. McKay with a letter saying: “I want you to personally know that I have expressed myself with humility and utter honesty– and always with the prayerful thought that my action will, in the long run, help, not harm, the church.” The letter earned Stew “very stern rebuking letters” from Elder Spencer W. Kimball and Elder Delbert Stapley (who also, incidentally, wrote Governor George Romney criticizing his public embrace of the civil rights movement). Stew nevertheless said he was “very proud of [the letter to the editor] to this day…. I made a statement, a statement of conscience.” In reflecting on the eventual lifting of the ban, Stew said “President Kimball, whom I consider the most inspired Mormon president of this century, did the right thing, and I’ve been enormously pleased by it.”

Stew represents an earlier time in politics. He was always an example of integrity and sincerity, whether or not one agreed with the policies he advocated.  His Mormon upbringing informed both his work and his political views throughout his life.  Stew’s concern for both the environment and the less fortunate are reflected in his lifetime of public service and advocacy. While he did not actively participate a great deal after graduating law school, Stew remained close with the Church throughout his life and played a key role for the Church in several important developments and debates. At a time when there is increased media attention on Mormon Church and its politicians, Stew reflects well on the Church and leaves a legacy that can make Mormons proud.