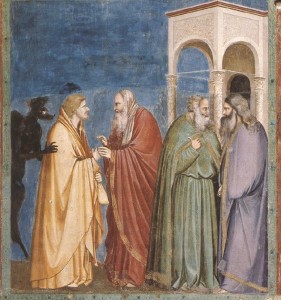 THE PLOT TO KILL JESUS

And it came to pass, when Jesus had finished all these sayings, he said unto his disciples, Ye know that after two days is the feast of the passover, and the Son of man is betrayed to be crucified. Then assembled together the chief priests, and the scribes, and the elders of the people, unto the palace of the high priest, who was called Caiaphas, And consulted that they might take Jesus by subtilty, and kill him. But they said, Not on the feast day, lest there be an uproar among the people. (Matthew 26:1–5)

Although some harmonies of the gospels list “No Events Recorded” for Wednesday, both Matthew 26:2 and Mark 14:1 place the conspiracy of Judas with the Jerusalem leadership with the Passover “after two days.” This is better rendered “in two days time” or “two days away” (Luke just says that the Passover “was nigh”). This does not securely place Judas meeting with the priests on “Spy Wednesday,” however, since the two days can be counted either inclusively or exclusively, and Passover may have begun at sundown either on Thursday evening (as the Synoptics seem to suggest) or Friday evening (as John probably records more accurately, see Thursday discussion below).

John’s account had placed the beginning of this plot before the Passion week, shortly after the raising of Lazarus:

Then gathered the chief priests and the Pharisees a council, and said, “What do we? for this man doeth many miracles. If we let him thus alone, all men will believe on him: and the Romans shall come and take away both our place and nation.” And one of them, named Caiaphas, being the high priest that same year, said unto them, “Ye know nothing at all, Nor consider that it is expedient for us, that one man should die for the people, and that the whole nation perish not.” And this spake he not of himself: but being high priest that year, he prophesied that Jesus should die for that nation. (John 11:47–51, emphasis added)

The prophecy of Caiaphas in the Johannine addition to the plot story is laden with irony, because it has Jesus’ chief opponent actually teach a true doctrine: Jesus did come to die for the sake not just of the Jewish people but for all people. Oddly, the divine economy can often use the enemies of that which is right and good to accomplish God’s purpose. Jesus’ vicarious death was not just for good men, it was for all and can benefit all, even those who, like the Jerusalem leadership who plotted against him, provided that at some point they repent and turn to him whom they rejected. 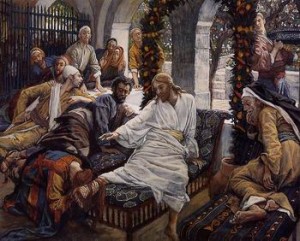 ANOTHER ANOINTING AT BETHANY

After noting the plot to kill Jesus, Matthew and Mark provide another account of Jesus’ anointing:

There came unto him a woman having an alabaster box of very precious ointment, and poured it on his head, as he sat at meat. But when his disciples saw it, they had indignation, saying, “To what purpose is this waste? For this ointment might have been sold for much, and given to the poor.” When Jesus understood it, he said unto them, “Why trouble ye the woman? for she hath wrought a good work upon me. For ye have the poor always with you; but me ye have not always. For in that she hath poured this ointment on my body, she did it for my burial. Verily I say unto you, Wheresoever this gospel shall be preached in the whole world, there shall also this, that this woman hath done, be told for a memorial of her.” (Matthew 26:8–13)

Gospel harmonies have conventionally assumed that this anointing is the same as the one mentioned earlier in John 12:1–9. While this may be true, there are specific differences in circumstances that make it possible that there were, in fact, two anointings. Although both took place in Bethany, the Matthean and Marcan anointing take place in the house of one Simon the Leper, whereas the Johannine anointing was in the house of Lazarus and Martha. Their sister Mary anointed Jesus’ feet in John’s account, but here the woman anoints his head and is unnamed. Like Mary, who anointed Jesus’ feet at Lazarus’ house the previous Saturday (John 12:1–9), Jesus explicitly recognizes that this woman had performed the act in part to prepared him for his burial and provides a moving tribute and commendation: wherever the gospel is preached, we should recall her act of love and faith.

Luke omits the anointing of Jesus’ head in Bethany at the house of Simon the Leper, presumably because the episode is so similar to an unrelated washing and anointing of Jesus’ feet earlier in the Galilean ministry which are described in Luke 7:36–50 as an act of love by a woman “who was a sinner.” Once again, some harmonies and studies of the gospel have associated all of these anointing stories with the same woman and the same incident. While this may be the case, there is no indication that the unnamed woman here was a sinner, and the timing and setting of Luke’s account is much different.

As noted in the discussion of the anointing as recorded in John, the woman’s act of preparing Jesus for his burial presupposes that she understood, at some level at least, that he had come to Jerusalem to die.  This stands in contrast to the perceived understanding of the male disciples in the gospel of Mark, generally followed by Matthew and Luke.  In those gospels the Twelve, starting with Peter at Caesarea Philippi, had received powerful testimonies of who Jesus was, the Christ and son of God (Mark 8:27–30; par Matt 16:13–20, Luke 9:18–20).  Notwithstanding this revelation, when Jesus tried to explain to them three different times on the road to Jerusalem that he would be taken by the chief priests and elders when he arrived in Jerusalem, delivered to the Gentiles, and finally killed, they either resisted this sad reality or failed to understand (see the so-called “Passion Predictions” in Mark 8:31–9:1, 9:30–3, and 10:32–45, as well as the parallels in Matthew and Luke). At least in the literary record, the male disciples knew who he was but did not yet fully understand what he had come to do, still thinking perhaps in terms of an earthly king and messiah.

In this light, the unnamed woman’s act, like that of Mary earlier in John, was one of deep love and faith, one that resonates strongly with anyone, man or woman, who has lost or faces the prospect of losing a loved one.  In such instances, letting go is in itself an act of love when one recognizes that the loss is God’s will.  The glorious message of Easter, of course, is that such loss is never permanent:

While the anointing of Jesus explicitly deals with Jesus’ coming death, remembering that one who was anointed was a mašiach in Hebrew or a christos in Greek suggests a possible, additional symbol in this act. While Jesus was the chosen Messiah from the foundation of the world, perhaps these acts symbolize that Jesus was at this point fully prepared now to complete his mission as the Savior of the world.  Regardless of how many anointing there may have actually been, the evangelists may have used this motif in different settings for different literary purposes. Thus the anointing by Mary on Saturday could thus represent the anointing of Jesus as king prior to the Triumphal Entry the next day, and the anointing by the unnamed woman in the middle of the week could represent his anointing as priest, preparing him to return to Jerusalem for a final time to complete the priestly act of atonement. 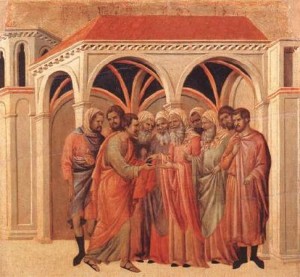 One of the disciples who may have been the most bothered by the woman’s supposed waste could have been Judas, since Matthew and Mark both place his decision to betray Jesus immediately following their account of the anointing at Bethany.

Then one of the twelve, called Judas Iscariot, went unto the chief priests, And said unto them, “What will ye give me, and I will deliver him unto you?” And they covenanted with him for thirty pieces of silver. (Matthew 26:14–16)

Although the significance of the price of betrayal, thirty pieces of sliver, is not absolutely clear, there seems to be some resonance with the story of the sale of the patriarch Joseph into Egyptian bondage for twenty pieces of silver (Genesis 37:28).  Joseph, who is in many ways a Christ-type in that he “saved” his family from death by starvation, was betrayed by his brothers, left in a pit, and eventually found and sold by Midianites. Some assume that the difference in cost, twenty versus thirty pieces of silver, represents inflation between the two episodes, but the vast amount of time separating the two stories makes this entirely speculative.

More directly, the price thirty pieces of silver seems to be connected with the Mosaic injunction regarding the price of an injured slave (see Exodus 21:32).  Jesus, the Master of us all, is being treated here not just as a slave, but one who will shortly be “bruised” for us.  This entire incident, including the final use of the money to by “the potter’s field” in which to bury strangers, is prophesied in Zechariah 11:12-13.

Over the years much speculation has arisen regarding Judas’ motivation in betraying Jesus.  For instance, some have suggested that he actually had believed very strongly that Jesus was the Messiah but that he had the more contemporary, conventional concept of a political messiah and military deliverer in mind.  Disappointed after the Triumphal Entry that Jesus had not “taken the kingdom,” he became disaffected.  Some have even suggested that he believed very strongly in Jesus’ divine credentials and thought that he was “forcing his hand” by setting up his arrest, since since surely Jesus would at last unveil his full power to resist his capture.  Early Gnostic sources, as (in)famously revealed in the so-called Gospel of Judas, suggested that Judas had actually been directed by Jesus to betray him in order to “free” his spiritual, divine Self from his mortal body.

None of the gospel texts, however, explicitly make any of these suggestions.  The only motivations given are either concerns about and desire for money or the fact that the power of Satan had come upon him.  As we shall see in the account of Jesus’ arrest on Thursday, the significance of Judas’ role in Jesus’ capture will be the act of betrayal itself, which was, for some terrible reason, a vital part of the atoning journey he walked.

← Tuesday before Easter
Waiting Outside the Temple →