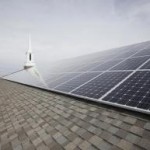 This week the presiding bishop of The Church of Jesus Christ of Latter-day Saints unveiled the first solar-powered LDS meetinghouse in Farmington, Utah. The building is one of five green prototypes being developed for LDS chapels in Utah, Arizona, and Nevada—and the building program will eventually expand across the US and around the world. The official press release cites other environmentally-friendly building innovations in the Farmington facility, including high efficiency heating and cooling system that can interface with the solar power equipment, xeriscaped grounds,  plumbing fixtures that cut water use by more than 50 percent, and Low-E Solarban 70 windows that block 78 percent of the sun’s heat energy. The parking lot will even feature special parking spots for electric cars.

This is not the Church’s first foray into environmental building and design. The Salt Lake Tribune reports:

Employing “green” technologies is not new to the LDS Church. Indeed, Tuesday’s news conference highlighted past earth-friendly efforts such as the geothermal plant built in the 1980s to power a California meetinghouse and the fact that rainwater has been collected since the 1950s at Pacific Island church buildings.

I suggested last week that the LDS Church hasn’t really developed a unique environmental vocabulary, and indeed the publicity surrounding the new meetinghouse is framed in terms of the larger Christian notion of stewardship. But the LDS do have a robust tradition of frugality and practicality, and this innovation fits comfortably into that history: the new meetinghouse is 30 percent more efficient than any existing model, and it will provide all its own electricity, saving about $6000 per year. The green prototype cost $1.64 more per square foot to construct than a standard meetinghouse, but that extra cost will be repaid through energy savings.

As encouraging as I find the environmental innovation, this architectural change is more intriguing. Most LDS meetinghouses are built to standardized specifications which have been described by one observer as “eminently practical, and largely hostile to both aesthetic sense and the articulation of a sacred space.”  Mormonism developed in the context of New England Puritanism, and it adopted the plain, unadorned style of Puritan meetinghouses even if it did not share the doctrinal ideas behind that austere aesthetic.  LDS meetinghouses are functional and comfortable, but, in contrast to LDS temples, are mostly devoid of stained glass, religious art, or icons. (There are notable exceptions, mostly in meetinghouses that were built in the 1930s and 1940s.  The building I attended as a child in Southern California features a large and lovely stained glass image of Christ behind the pulpit, together with scriptures from the New Testament.) 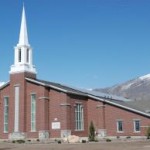 As Church membership grew exponentially during the mid-twentieth century, it became prudent and practical to standardize building design, and in a culture as fiscally cautious as the LDS there was never a doubt as to the outcome of the battle between economics and aesthetics.  While the new meetinghouse appears largely similar in architectural sensibility to standard LDS buildings, the change in chapel layout suggests that more architectural innovation may be coming. Perhaps we are now in a new historical moment in which aesthetics and economics can happily cohabitate.