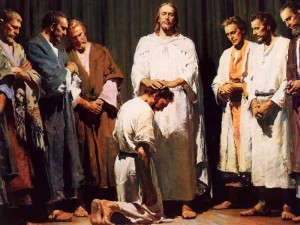 In the course of an interesting email exchange today, I learned that a good friend and I had had similar experiences in trying to track down our priesthood lines of authority. After being ordained Elders, we both asked our fathers if they had copies of their lines of authority, both said they thought they did somewhere, but both ultimately could never come up with them.

My friend then approached his uncle, figuring that he might have the same line as my friend’s father, but without success. Fast forward ten years. His uncle randomly found his line of authority and remembered my friend asking for it. They were both surprised to learn though that the uncle had been ordained an Elder by his Bishop, not by his father as is the current custom. Unfortunately this Bishop was not Bishop when my friend’s father would have been ordained, so my friend was still no closer to tracking down his own line of authority.

If you (like me) have never managed to get a hold of a copy of your line of authority, here’s how you do it.  Email lineofauthority (at) ldschurch (dot) org with the subjection line “Request [your name]” and include the following information in the text of the email:

Who Priesthood Line of Authority is Being Requested For

As I was preparing to post this, it was pointed out to me that Ardis Parshall had a great post on the subject a few years back. I figured it was still worth revisiting the topic, however, as many (like myself) may have missed her write-up.