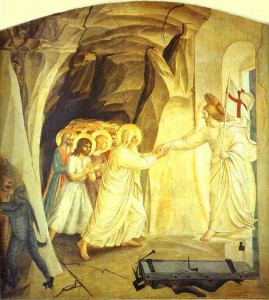 Christian tradition relates the so-called “Harrowing of Hell,” wherein Jesus broke the bonds of Adam and Eve and brought them and other Old Testament saints from hell into heaven.  Although LDS doctrinal statements do not include statements such as “and he descended into hell” as do the Apostolic and other creeds, Restoration scripture does stress that “he descended below all things” (e.g., D&C 88:6, 122:8).

The real state of the righteous dead before the Atonement of Christ and Jesus’ own activities among them during the time that his body lay in the tomb of Joseph of Arimathea were revealed to Joseph F. Smith on October 3, 1918:

As I pondered over these things which are written, the eyes of my understanding were opened, and the Spirit of the Lord rested upon me, and I saw the hosts of the dead, both small and great.  And there were gathered together in one place an innumerable company of the spirits of the just, who had been faithful in the testimony of Jesus while they lived in mortality; And who had offered sacrifice in the similitude of the great sacrifice of the Son of God, and had suffered tribulation in their Redeemer’s name.

All these had departed the mortal life, firm in the hope of a glorious resurrection, through the grace of God the Father and his Only Begotten Son, Jesus Christ. I beheld that they were filled with joy and gladness, and were rejoicing together because the day of their deliverance was at hand.  They were assembled awaiting the advent of the Son of God into the spirit world, to declare their redemption from the bands of death.  Their sleeping dust was to be restored unto its perfect frame, bone to his bone, and the sinews and the flesh upon them, the spirit and the body to be united never again to be divided, that they might receive a fulness of joy.

While this vast multitude waited and conversed, rejoicing in the hour of their deliverance from the chains of death, the Son of God appeared, declaring liberty to the captives who had been faithful; And there he preached to them the everlasting gospel, the doctrine of the resurrection and the redemption of mankind from the fall, and from individual sins on conditions of repentance.

But unto the wicked he did not go, and among the ungodly and the unrepentant who had defiled themselves while in the flesh, his voice was not raised; Neither did the rebellious who rejected the testimonies and the warnings of the ancient prophets behold his presence, nor look upon his face. Where these were, darkness reigned, but among the righteous there was peace; And the saints rejoiced in their redemption, and bowed the knee and acknowledged the Son of God as their Redeemer and Deliverer from death and the chains of hell.” (D&C 138:11-23, emphasis added)

President Smith Further related the subsequent missionary work that was organized in the Spirit World:

But behold, from among the righteous, he organized his forces and appointed messengers, clothed with power and authority, and commissioned them to go forth and carry the light of the gospel to them that were in darkness, even to all the spirits of men; and thus was the gospel preached to the dead. And the chosen messengers went forth to declare the acceptable day of the Lord and proclaim liberty to the captives who were bound, even unto all who would repent of their sins and receive the gospel. Thus was the gospel preached to those who had died in their sins, without a knowledge of the truth, or in transgression, having rejected the prophets. These were taught faith in God, repentance from sin, vicarious baptism for the remission of sins, the gift of the Holy Ghost by the laying on of hands, And all other principles of the gospel that were necessary for them to know in order to qualify themselves that they might be judged according to men in the flesh, but live according to God in the spirit. And so it was made known among the dead, both small and great, the unrighteous as well as the faithful, that redemption had been wrought through the sacrifice of the Son of God upon the cross. (D&C 138:30-35, emphasis added)

The account from 3 Nephi not only provides a powerful picture of the aftermath of Jesus’ death in the New World but also contains some powerful teaching by the voice of the Savior himself regarding the effects of his death and resurrection:

Yea, verily I say unto you, if ye will come unto me ye shall have eternal life. Behold, mine arm of mercy is extended towards you, and whosoever will come, him will I receive; and blessed are those who come unto me.  Behold, I am Jesus Christ the Son of God. I created the heavens and the earth, and all things that in them are. I was with the Father from the beginning. I am in the Father, and the Father in me; and in me hath the Father glorified his name.  I came unto my own, and my own received me not. And the scriptures concerning my coming are fulfilled.  And as many as have received me, to them have I given to become the sons of God; and even so will I to as many as shall believe on my name, for behold, by me redemption cometh, and in me is the law of Moses fulfilled.  I am the light and the life of the world. I am Alpha and Omega, the beginning and the end.

And ye shall offer up unto me no more the shedding of blood; yea, your sacrifices and your burnt offerings shall be done away, for I will accept none of your sacrifices and your burnt offerings.  And ye shall offer for a sacrifice unto me a broken heart and a contrite spirit. And whoso cometh unto me with a broken heart and a contrite spirit, him will I baptize with fire and with the Holy Ghost, even as the Lamanites, because of their faith in me at the time of their conversion, were baptized with fire and with the Holy Ghost, and they knew it not.  Behold, I have come unto the world to bring redemption unto the world, to save the world from sin.  Therefore, whoso repenteth and cometh unto me as a little child, him will I receive, for of such is the kingdom of God. Behold, for such I have laid down my life, and have taken it up again; therefore repent, and come unto me ye ends of the earth, and be saved. (3 Nephi 9:14-22, emphasis added)

Jesus’ ministry in the spirit world suggests that his “atoning journey” was not just from Gethsemane to Calvary, followed by an interruption while his body lay in the tomb before the final miracle of the Empty Tomb.  Rather he continued his salvific work to free captives from the grasps of sin even while his body lay dead.

The preaching of the gospel to the dead, coupled with the vicarious performance of ordinances on their behalf by Christ’s living followers on the earth, is one of the great revelations of the Restoration, revealing God’s fairness, justice, and mercy.  While some modern theologians are now exploring the concepts of “persistent love and grace” of God towards those not saved in this life, the truths revealed through Joseph Smith proclaim that, as always, God’s love and mercy to us has been, and continues to be, revealed in the person of his Son Jesus.

For I am persuaded, that neither death, nor life, nor angels, nor principalities, nor powers, not things present, nor things to come, nor height nor depth, nor any other creature, shall be able to spearate us from the love of God, which is in Christ Jesus our Lord.  (Romans 8:38-39).

2 comments for “Saturday before Easter”