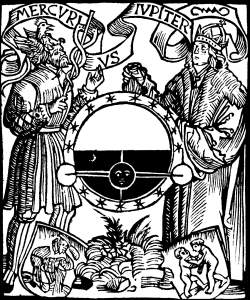 Despite a unique cosmology that has at times inspired artistic creation for a wider American audience, there is no Mormon astrology. Someone who knew Mormonism only through its scriptural texts might be forgiven for finding this omission curious.

After all, the biblical foundations for astrology in Christian tradition would seem only stronger in Mormon scripture. That God placed lights in the heavens for signs is found once in Genesis, but twice more in the Pearl of Great Price. The biblical verse was enough to give scriptural color to astrology for a millennium, with the seven planets imagined as God’s messengers, at least to those who were properly trained in the art of interpreting the heavens (and, as they would remind you, God would surely do nothing without revealing his secrets to his servants). The New Testament account of Christ’s birth also lent support to astrology, for if a star marked the appearance of the King of Heaven, then similar portents must surely foretell the advent of lesser kings and the fates of nations. The Book of Mormon takes the story one step further: the astronomical events do not just attend Christ’s birth, they also directly influence human matters of life and death, and so the astrological epistemology would seem complete: events in the divine realm affect the human sphere by way of the stars. And of course the Book of Abraham canonizes the idea of a divine cosmology with personified heavenly bodies at various distances from God governing the rest of the universe. The role of Oliblish would seem not very different from that played by Jupiter and Mercury from the Middle Ages into the seventeenth century.

Alas, there is no Mormon science of divining the future according to Kolob’s last gleaming. For the most part, this is the unsurprising consequence of our era, with scientific astronomy established and astrology in decrepitude for over three centuries, but it is also a consequence of how Joseph Smith and the milieu in which he lived looked at the world.

In a conference address, Joseph Smith made passing reference to the “blotted page of the book of nature” as something that limits human understanding of the divine law. The idea of the Book of Nature as one source of truth is at least as old as Augustine, and it was an idea that medieval astrologers repeatedly emphasized: God has written his will in the heavens as in a book, and the astrologers were the only ones trained to read it. This proposition was always controversial, but with the scriptural support of Genesis and other biblical verses for the notion that stars were heavenly signs, it was difficult to repudiate fully, and so a theologian like Pierre d’Ailly could be both a cardinal and an influential astrologer.

But in Joseph Smith’s formulation, the pages of the Book of Nature have become blotted: not perfectly corrupt, so that one could perhaps still recognize in it evidence of God’s creative power, but nevertheless blotted, so that the precise details of the Gospel were no longer apparent. (The parallelism of the complete passage also suggests that the Book of Nature is an imperfect but not utterly ruined medium for receiving knowledge, as it hypothesizes men who are “intelligent, learned, virtuous and lovely, walking in uprightness and in all good conscience, so far as they have been able to discern duty from the muddy stream of tradition, or from the blotted page of the book of nature.”)

Quite apart from short-circuiting the rise of a professional class of Mormon astrologers (to answer such questions as, “on what day of the month will my home teaching be most effective?”), the limited revelatory potential of the Book of Nature in Mormon thought makes imperfect Romantics of us, as Nature ceases to be a way to experience unmediated truth. We expect no illumination from looking up in perfect silence at the stars. If there is truth to be gleaned from the heavens, it requires the painstaking work of a learned astronomer.

9 comments for “The blotted page of the book of nature”