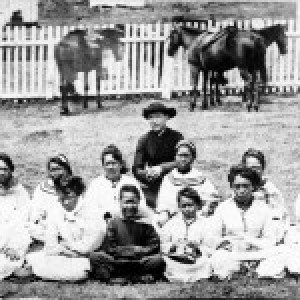 Father Damien of Molokai with residents of the Kalaupapa colony. Photo courtesy of saintdamien.com

Sunday evening I attended a screening of a preliminary cut of the documentary “The Soul of Kalaupapa.”  The film examines the ecumenical legacy of the leper’s colony  on the Hawaiian island of Molokai.  Kalaupapa was brought to recent prominence by last year’s canonization of Saint Damien of Molokai, the key figure in the community’s history.  Fred Woods, a producer of the film and an historian whose research focuses on Kalaupapa, presented the film and followed it with a lecture on the topic.

The history of the place is compelling, and heartbreaking.  Founded in 1865 on an isolated peninsula of Molokai, the colony was a response to the era’s intense fears surrounding the spread of Hansen’s disease, the preferred medical term for leprosy. Between 1866 and 1969, over 8,000 people were forcibly quarantined on the Kalaupapa site.  Some patients, including children, were sent alone to make their way as strangers in this fearful new place, which they expected never to leave. Sometimes family members accompanied the afflicted as kokua, or helpers, knowing that they put their own lives at risk in doing so.

A treatment for the disease was discovered in 1969, and residents after that were permitted to leave the settlement and travel as they pleased. But many chose to stay in the community that had become their world.  At present there are several dozen men and women remaining, though their numbers dwindle every year, and Professor Woods is working to preserve their stories and the cultural history of Kalaupapa before it is lost forever.

The central figure in the community’s history is Father Damien, a Belgian-born priest living in Hawaii who volunteered to come to Kalaupapa in 1873.  He arrived to find a community in social and moral disarray; the colony had been effectively abandoned on the peninsula for eight years, and poverty and neglect had disfigured social relations among its residents.  Damien worked to build both the physical and spiritual infrastructure of the place, constructing homes and roads and an orphanage, organizing a school, a choir, and a children’s band—-all while serving his children in the capacity of a priest. He opened himself fully to the residents, eating with them, living among them, welcoming them into his home. In doing so, he knowingly made himself vulnerable to the disease that ravaged his friends. Father Damien contracted Hansen’s disease in 1884, and he died from its effects in 1889.  The residents of Kalaupapa revered his memory, and he remains a mythic figure of benevolence and compassion, the genius loci of that place.

In 1873, the same year that brought Father Damien to Kalaupapa, another religious leader came to the community. Jonathan Napela, a native Hawaiian, was a prominent figure in the state: trained in the law, he became a district judge in 1848. In 1852, Napela embraced Mormonism and became a leader in the LDS community on the islands, aiding in missionary work and translating the Book of Mormon into the Hawaiian language together with George Q. Cannon. When Napela’s wife Kitty, a member of the royal family, contracted Hansen’s disease, Napela elected to accompany her to the colony rather than abandon her to save his own life.  In Kalaupapa, Napela served as the leader of the LDS flock, serving selflessly among his afflicted children as Damien did among his.  And like Damien, Napela literally gave his life to service, dying from Hansen’s disease in 1879.

A Gilded Age cartoon captioned "Religious liberty is guaranteed, but can we allow foreign reptiles to crawl all over US?" The image shows two reptiles labeled "Roman Church" and "Mormon Church" atop the Capitol building.

The historical record has left us little material on Napela’s years in Kalaupapa, but we do know that he and Father Damien became fast friends. A contemporary described the two men as “the best of friends,” and circumstances gave them much in common despite their different backgrounds and affiliations.  In some ways their friendship was unexpected: Hawaii was a desirable mission field for Christians of all stripes, and competition for proselytes was intense.  But Father Damien and Jonathan Napela, a Roman Catholic and a Mormon, shared the unenviable distinction of despised among the despised. Both Catholicism and Mormonism aroused the suspicion of the American Protestant establishment, and both were frequent targets of religious discrimination.  Perhaps it was this experience of alienation that gave Father Damien and Brother Napela such compassion for the outcast residents of Kalaupapa, and that motivated the unique ecumenicism that prevailed in the community.

Kalaupapa was home to several Catholic chapels, a Protestant meetinghouse, a Mormon chapel, and a Buddhist place of worship.  The friendship between Father Damien and Brother Napela appears to have characterized interdenominational relations more broadly in the community.  Residents of Kalaupapa recall, and historical records confirm, that the community often came together in common religious efforts, aiding one another in funding and constructing their respective chapels, attending one another’s services, and enjoying a solidarity that transcended sectarian differences.  A former patient, Bernard, remarked of Kalaupapa that it once was “a devil’s island, a gateway to hell,” but that it now is “a gateway to heaven.” There, in what some saw as the eighth circle in paradise, they made one another homes of  their own afflicted flesh and blood.

One irony in telling the story of Kalaupapa is that an emphasis on the moral courage and heroic compassion of Father Damien and Brother Napela—an emphasis that lends dramatic shape and pathos to the story—works against the moral logic of their own choices.  They lost their lives for Christ in an obscure colony among the least of the world’s despised.  To recover and promote their lives, even for the commendable purpose of inspiring compassion in ourselves, is in some ways to negate the profound selflessness of their ministries.  Their story should be told nevertheless.  But I appreciate the emphasis in “The Soul of Kalaupapa” on the lives of the residents of Kalaupapa themselves—on their experiences, their relationships, their courage and resourcefulness and faith and compassion.  They inherited their corner of the earth, and that inheritance is the redemptive story.

12 comments for “The eighth circle of Paradise: Saint Damien of Molokai and Jonathan Napela in Kalaupapa”