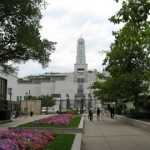 During a great discussion of our most recent general conference, one very bright young woman in my class sincerely asked, “President Packer said that ‘the father presides at the table’ – and I just want to know what that means.” A very lively discussion ensued. The women in the classroom sat very still, intently listening, but unwillingly to chime in as a barrage of answers were given by the men – ranging from the mildly to the wildly sexist. I did my best to counter the barrage by explicitly pointing out the implications of the answers being given (which ranged from the comic to the frightening). But I was unprepared to discuss the details of President Packer’s talk and I don’t think I did much to help that young woman (though I did manage to offend several of the men, one of whom later commented in my evaluation that BYU did not appreciate my attempts to spread “extreme feminism” – I can only take that as evidence that our culture is craving significant clarification).

I’ve now gone carefully back through President Packer’s talk, and hope to be able to do a better job giving an answer.

What exactly it means for the priesthood or the father to “preside” in the home is a popular bloggernacle topic (see here, here, here, here, and here for worthwhile examples of the numerous T&S discussions) – in large part this is so because of the absence of any official definition or determinative discussion on the matter, together with the explosive potential of the phrase itself, and the long list of unrighteous-dominion-train-wrecks experienced by people in the church. The difficulty is finding a way to meaningfully clarify what it is to preside in the home without unrighteously elevating men over women. I think President Packer gives us one of the most enlightening and exciting discussions on the matter to date. He does so by first, making the substance of presiding a matter of bringing the power of the priesthood and manifestations of godliness into the home and family; second, making it largely a matter internal to the priesthood itself; and third, acknowledging a logistical significance that doesn’t carry normative prestige. So here’s another foray into the morass.

The main message of Pres. Packer’s talk is to inspire “every man [to stand] in his place” by taking upon themselves not simply the authority of the priesthood, but also exercising its power, specifically in preaching the gospel and blessing our homes. According to Pres. Packer, the church has done its organizational best and has “done very well at distributing the authority of the priesthood.” In doing so, however, the church has “raced…ahead of distributing the power of the priesthood.” Correlation is only an organizing force, and the organization of the church can only do so much to facilitate priesthood bearing families’ access to “all of the powers of heaven.”

Similar to several other talks given this past General Conference, Pres. Packer emphasizes (quoting Pres. Lee) that the church exists in large part “to assist the family in carrying out its divine mission,” the family being “the order of heaven.” With this backdrop, President Packer moves into a discussion of priesthood in the home, where “the presiding authority is always vested in the father” (here quoting Joseph F. Smith).

Again, as is often the case, President Packer is conspicuously inexplicit in defining this phrase. Instead, he cites concrete examples of what this means, letting the illustrations speak for themselves. Taking the liberty of abstracting from these examples in order to come to an explicit definition, my reading reveals three functions contained in the notion of presiding in the home:

By way of interpretation, it seems to me that in addition to logistical efficiency, this last point – the father being responsible to call on others to pray, etc. – embodies a success-through-redundancy strategy. The church first preaches to everyone, loud and clear, how important it is for each family to engage in family prayer, blessing rituals, family home evening, scripture study, and the like. It then repeats specifically to fathers the exact same message. This is simply to help ensure that it happens. There is certainly no prestige attached to the redundant imperative issued to fathers, and no violation or infraction takes place if the mother in actual fact is more active in seeing that these practices happen. The redundancy, repeating the same imperative to fathers that has already been issued to the family as a whole, is simply that – redundancy; it’s an attempt to increase the likelihood of these important practices being practiced.

This doesn’t mean that it’s not important or that it isn’t a duty – it is indeed an imperative that accrues to the notion of presiding that every father ought to take seriously and carry out. But we need to recognize the logistical aspect for what it is and not let it distract us from the much more substantive point of overseeing the administration of priesthood ordinances – and the power of godliness that comes with these ordinances – inside of the home.

This point also highlights the priority of the family. It is only because the church exists to assist in building celestial families and societies that there is a need for a point of contact. The priesthood holder is able to serve as a logistical interface between the two. It should go without saying that there is nothing holy about this function, and it is easily adapted in the common scenario of a family without a priesthood-holding father.

Unfortunately, there is a tragic irony that practically results all too often. What Pres. Packer claims is a divinely appointed practice meant to bond families together as a celestial unit is misunderstood and too often becomes instead something that divides families. As President Hinckley repeatedly claimed (particularly, here), any interpretation of “presiding in the home” that leads to the oppression of women or division of family is simply wrong. This certainly includes the common and explicitly sexist and damaging claims that “presiding” means fathers have the final say or veto power, sit in a position of authority over women, are responsible for delegating or rearranging all family affairs, or any other interpretation that leads to unrighteous dominion. It also rules out sexist assumptions that men are spiritually pusillanimous and need the priesthood in order to be anxiously engaged in their families’ spiritual life.

(Another post unto is itself is why, in the face of such declarations over the pulpit, Mormon culture seems entirely insulated from the broader Western culture on this point. The young men in my class didn’t get their sexism from our society’s contemporary values, and they don’t get it from careful readings of our scriptures and general authorities – though obviously in our culture they might hear a chauvinism that’s not actually there. Why, then, is it such a pervasive Mormon cultural blight?)

The reality is, no matter how much we would like the phrase and its horrific cultural baggage to go away, the language of “presiding” is very close to canonical. It’s just not going to go away. One particular benefit that I see in Pres. Packer’s substantive interpretation of “fathers presiding” is that it helps us to make sense of what is, by some readings, a straightforwardly inconsistent church doctrine. We can either take The Family: A Proclamation to the World as blatantly contradicting itself, claiming first that “by divine design, fathers are to preside over their families” followed almost immediately by the phrase “fathers and mothers are obligated to help one another as equal partners.” Or we can interpret these phrases in a consistent manner, recognizing the latter phrase as shedding light on the former, as instituting interpretive constraints. Doing so leads to the strengthening and not the destruction of the family. This, I believe, is exactly what President Packer’s recent address helps us to do.