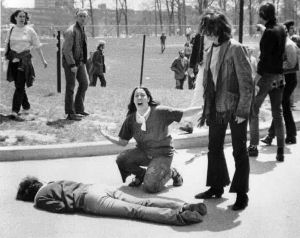 What if you knew her and  /
Found her dead on the ground?  /
How can you run when you know?

Today is the 40th anniversary of the Kent State Massacre. Have we learned what we should have from the tragedy?

The massacre became an emblem of the conflict over the Vietnam War in the late 1960s and early 1970s. It began as a student protest at Kent State University in Northeastern Ohio over the Nixon Administration’s decision to expand military operations into Cambodia. The excesses of the protest led to damage to businesses in downtown Kent, Ohio and the destruction by arson of the campus ROTC building. In response, on May 2nd the governor of Ohio called out the National Guard, who at the time were armed with just bayonets and M1 rifles.

The students called a new protest for May 4th, drawing 2,000 despite the distribution of 12,000 fliers by the Guard and administration claiming that the protest had been canceled. When the Guard told the group to disperse, the protesters threw stones at them. With bayonets fixed, the guard forced the protesters to leave, although many milled around the campus, delaying their exit.

One group of guardsmen, after the crowd was leaving, inexplicably opened fire, wounding nine and killing four, although no one was within 70 feet of the guardsmen, and the troops were under no immediate threat. The dead included two passersby, one of whom, ironically, was an ROTC student.

The incident led to a national outcry. Crosby, Stills, Nash and Young recorded their song Ohio (lyrics quoted in part above) less than 3 weeks after the tragedy. Student photographer John Filo’s photo (above) of the aftermath went on to win the Pulitzer Prize. More significantly, the event went on to widely influence public opinion about the war.

The U.S. has learned some things from Kent State and other protest incidents. Our police are better trained and better equipped to handle protests when they turn violent — professionally trained riot police have largely replaced the National Guard and rubber bullets and batons have replaced the .30-06 rounds and bayonets used at Kent State. While protests are still sometimes violent and protesters are sometimes arrested, we no longer see police firing live rounds and protesters usually don’t die (not in the U.S.).

Of course, this lesson about how to handle protests isn’t the only thing we could learn from Kent State. I worry that we haven’t learned a larger lesson about the use of force.

To a degree, we are all complicit in how force is used officially in our society. The message we send to police and politicians about security, the types of materials and budget we provide police, what tasks we want police to taken on, all influence how and when police use force. The rubber bullets we now provide police and the water cannons sometimes used clearly indicate that a loss of life is much less acceptable than it once was. The U.K.’s refusal to allow the average beat cop to carry a gun shows a different view of when force is acceptable and how it should be used.

Please don’t think I’m being naive about this. I’m not suggesting that force can never be used or that our police don’t need to carry guns. I am suggesting that we are, to a degree, responsible for what results occur because of the materials, training, funding and mission that we give police and anyone else we allow to use force.

The use of force is usually best left as a last resort. Deciding when it should be used is often difficult. And I fear that in our current security-conscious post 9/11 world, we resort to force too easily and too directly. We seem to want police to handle many tasks that don’t involve threats to life, limb or property and then arm them with the ability to intimidate those who violate into cooperation. In other cases, we emphasize security and “law and order” so much that our politicians ratchet up the harshness of sentences to satisfy public opinion. We seem to be so worried about enforcement and penalties that we lose the larger picture — the laws, motivations, economics, and culture around a problem. Calls that focus on punishing the bad guys or increasing enforcement often miss the larger picture. As every good parent knows, force alone rarely solves anything.

Mormon history has seen our people on both sides of the unjustified or misapplied use of force. The persecution we faced led to what was once called the Mormon Creed: Mind your own business. While I certainly don’t think we should do this in everything. But when it comes to the use of force, it seems to me to be fairly sound policy. If you don’t have a “dog in the fight” why get involved? Should we really push government into using force to eliminate every evil? Or can we find another way (perhaps persuasion and long suffering?) to combat some of them? And couldn’t other problems be influenced simply by changing the conditions, reducing or eliminating what leads to the evils around us?

Given the political stalemate around abortion, for example, persuasion and long suffering, and perhaps seeking to change conditions around abortion, may be a more effective way to combat this problem. Or, as another example, more and stronger drug treatment programs could be a better deterrent in some cases to long-term prison sentences. I’m no expert in these areas, but I don’t think other voters are either. From what I see, the assumption among most of the public seems to be that we must “throw the book at them” instead of finding what works. [In my own view, this is what’s going on with the Arizona law, but that’s a little off topic.]

There are, of course, other things to learn from Kent State. A whole protest culture has arisen since the 1960s, and I’m not sure that this culture has learned all the lessons it should from the shootings at Kent State. Neither protesters nor their detractors seem to have learned much about how to discuss an issue without rancor — and from that we could easily look at the idea expressed in the recent General Conference, that we need to learn to “disagree without being disagreeable.”

But I think the ideas about the use of force are perhaps the most crucial of the lessons remaining to be learned. In memoriam of the victims of Kent State, as well as other victims of unjustified and misapplied force, I pray that we learn them soon.

35 comments for “Four Dead in Ohio”