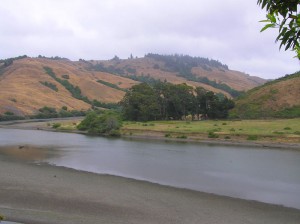 The memorial service was held in the mouth of the Russian River. Not on the beach by the river, but right in the water. Over a hundred surfers gathered there, clad in their wetsuits. They paddled on their surfboards into the river, pulling a massive floral wreath out on the water with them.

The first thought that struck me was how distinctive the group was. The surfers that gathered there became a foreign community to the rest of us, like I imagine a group of Amish or Hasidic Jews (or Mormons!) would be. The wetsuits acted like ritual attire, visually uniting the group (whose individuals are normally remarkably colorful) in smooth, somber black.

Watching the service from the shore, I had a glimpse of how loved ones waiting outside the temple during a wedding ceremony might feel. The river served as a natural, physical temple, separating the initiates from the merely curious. I could watch the service, but I was too far away to hear the words that were spoken.

Once the surfers had paddled into the river, they formed a tight circle around the gigantic wreath of flowers. In the circle, they floated on their surfboards (I didn’t know that surfboards are buoyant enough for a person to sit and float on). I couldn’t tell how the service was led, but there must have been some coordination. At times during the service, the group would all clap together, or shout together, or splash water together. The splashing water was especially visually striking. When a hundred people splash water in a circle, it looks like a natural phenomenon, like some great force beneath the water is creating the circle of spray.

The most beautiful performance in the service was when all the surfers threw flowers into the wreath at their center. These weren’t little wildflowers; they were big, bright, colorful flowers. Watching hundreds of these flowers arcing into the center was like watching a natural fireworks show.

I watched the service from the shore of the river, sitting next to my mom. Since we couldn’t hear the words, we spent most of the time talking about Noel. This was fitting: I learned later that most of the speaking during the memorial was the surfers sharing their thoughts and memories of Noel. I wish I could have heard the stories that were told there. But it was good to have participated as much as I could. I had the chance to talk with family members that I hadn’t seen in years. My cousin Andrew got married last year, and I got to meet his new wife. My sister Devon drove up from San Diego and she told me about about the consignment store that she has opened there, (Kit N Caboodle — if any of you stop by, say hi to Devon for me :)  ).

The trip ended with a strangely parallel experience. My wife grew up in Windsor, near the place where the memorial service was held. She hadn’t been there in ten years, so we took the opportunity to drive through the town. She showed me her old houses and schools. That drive, in connection with Noel’s memorial service, served to remind me how poorly we know even the ones we know best, and how frightfully dimly we know the ones we see only infrequently.