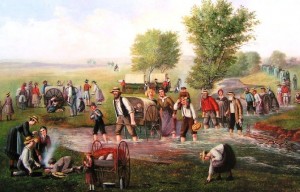 I spoke in church today.  The youth in our stake just completed a four-day handcart pioneer re-enactment, and my remarks followed upon several youth speakers testimonies about their experience.  Below is the text of my sermon:

Today I would also like to speak about handcart pioneers.  In 1855 and 1856 Mormons across Scandinavia and the British Isles began gathering together their possessions and making their way to North America.  They were converts to the church.  They had heard the missionaries preach the gospel and the message of the Restoration.  They had been touched by the Holy Spirit and had been baptized.  They wanted to gather with the Saints.  They were looking for a better life for themselves and their families in America, but beyond that they wanted to gather to Zion and assist in the building up of the kingdom of God.  Many of them had scrimpted and saved for many years to have enough money to make the journey.

They traveled by ship and rail until the railroad ended in Iowa City, Iowa.  These Saints were poor and by the time they arrived in Iowa their money had all but given out.  Furthermore, the church was poor.  It lacked the resources to subsidize the purchase of the wagons and ox teams that were usually necessary to cross the interior of the continent.  So at the behest of church leaders these Saints built handcarts and resolved to walk the 1000 miles to Utah, pulling their possessions behind them.  The first handcart companies to set out left in late spring and early summer.  It was a long and exhausting pull, but they arrived safely in the Salt Lake Valley.

The last two companies, however, were delayed and they didn’t leave Iowa City until early July.  It was mid to late August by the time they arrived in Winter Quarters near present day Florence, Nebraska.

There they met Levi Savage.  Levi Savage was a remarkable man.  He had joined the church and gathered with his family to Nauvoo.  There he was a close friend of the Prophet Joseph Smith and after Joseph’s murder he went west with the Saints.  In 1846, Brigham Young asked him to join the Mormon Battalion, a unit in the U.S. Army, in order to raise money for the rest of the Saints.  Levi Savage joined and walked from Florence, Nebraska all the way to San Diego, California.  From there he walked north to San Francisco.  From San Francisco he walked across the Sierra Nevadas to rejoin the Saints in the Salt Lake Valley.  Brigham Young gave him a few years to catch his breath, and then called him on a mission to Siam, in present day Thailand.  It would be difficult to imagine a more remote place for a nineteenth-century American.  So Levi Savage walked to San Francisco, and then took a ship to Calcutta, India.  From there he struggled to make it to Siam, but he was unable to get there due to a civil war.  Civil wars were the sort of thing that could finally stop Levi Savage.  He did, however, make his way to Rangoon, Burma in present day Myanmar and preached the Gospel there.  At the conclusion of his mission he boarded a ship sailing west around the Cape of Good Hope to Boston and from thence he made his way to Winter Quarters.

Hence, when Levi Savage met up with the Willie Handcart Company he had literally walked or sailed around the entire globe at the behest of church leaders to build up the kingdom of God.  He was an experienced frontiersman, someone who knew what was involved in crossing the interior of North America.  He begged and pleaded with the European immigrants not to set out so late in the summer.  He knew that setting out so late was terribly risky.  They could be caught in early winter storms on the high plains hundreds of miles from their destination.

Levi Savage was much more experienced that the leader of the handcart company, James Willie.  Willie seems to have felt threatened by Levi Savage’s expertise and his strong opinions.  His ego and pride seem to have gotten involved, and he overruled Savage, insisting that the company would leave immediately.  At this point, Levi Savage got up and gave a remarkable speech.  He said:

What I have said [about the risks of setting out so late] I know to be true; but seeing you are to go forward, I will go with you, will help all I can, will work with you, will rest with you, and if necessary, will die with you. May God in his mercy bless and preserve us.

Why did Levi Savage go with the handcart pioneers?  He didn’t have to.  He didn’t know these people and had never met them before.  Their leaders had treated him badly.  But they were his people.  Their God was his God. (Ruth 1:16) They were not strangers or foreigners, but fellow citizens in the household of God.  (Eph. 2:19) Levi Savage had been baptized and had made covenants that he would bear one another’s burdens that they may be light, would mourn with those that mourn and comfort that that stand in need of comfort. (Mos. 18:8-9)  And he knew that the emigrants would need someone to bear their burdens, to mourn with them, to comfort them.

Levi Savage, of course, was absolutely right.  The handcart companies were caught in an early blizzard high on plains of Wyoming more than 500 miles from their destination.  They were unable to move forward, and the members of the company began to die of exhaustion, starvation, exposure, and hypothermia.

Brigham Young learned of the late-departing handcart companies in early October.  It was General Conference, and the Saints were assembled on Temple Square.  Brigham got up and said:

I will now give this people the subject and the text of the Elders who may speak to-day and during the conference. It is this. On the 5th day of October, 1856, many of our brethren and sisters are on the plains with handcarts, and probably many are now seven hundred miles from this place, and they must be brought here, we must send assistance to them. The text will be, ‘to get them here.’ I want the brethren who may speak to understand that their text is the people on the plains. And the subject matter for this community is to send for them and bring them in before winter sets in.

That is my religion; that is the dictation of the Holy Ghost that I possess. It is to save the people. This is the salvation I am now seeking for. . .

I shall call upon the Bishops this day. I shall not wait until tomorrow, nor until the next day, for 60 good mule teams and 112 or 115 wagons. I do not want to send oxen. I want good horses and mules. They are in this Territory, and we must have them. . . .

I will tell you all that your faith, religion, and profession of religion, will never save one soul of you in the Celestial Kingdom of our God, unless you carry out just such principles as I am now teaching you. Go and bring in those people now on the plains.

The Savior told a story about a man on the road to Jericho who fell in among thieves.  (Luke 10:30-37) They beat him, took all of his possessions, and left him for dead in the dirt on the road.  A Levite came along.  The Levite was a good person.  He was keeping all of the rules.  He no doubt had on a white shirt and tie.  But he walked by, leaving the beaten man in the dust.  Then along came a Samaritan.  I imagine that he was a bit scruffy.  He wasn’t as good a member of the church as he could be.  He wasn’t keeping all of the rules like he should.  But he stopped.  He bounded up the man’s wounds, picked him up, and carried him to an inn, and promised the innkeeper that he would pay for whatever was necessary to heal the man.

Brothers and sisters, we are surrounded by people who are suffering and who face challenges.  There are people in our families, in our ward, and in our community who are trapped in the snows high on the plains of Wyoming, who are lying in dust on the road to Jericho.  Our job is to go and bring in the people on the plains, to pick them up and carry them to an inn. This is our religion; that is the dictation of the Holy Ghost to us. It is to save the people. This is the salvation that we should seek.  I pray that we may do so, in the name of Jesus Christ, Amen.

← Your opportunity to WIN. FABULOUS. PRIZES.
Just because they can’t see you doesn’t mean you’re not there →

26 comments for “The Dictation of the Holy Ghost to Us: A Pioneer Day Sermon”