I took a stroll through the End of the World last week. Brought the wife and kids and a picnic lunch. It was beautiful, as always. But one of these days (and it won’t be long) it will be gone. Maybe us too. 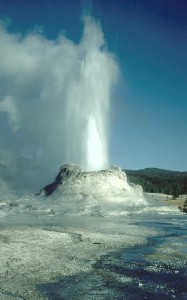 I’m speaking of the Yellowstone Caldera, of course. What’s unnerving is not so much the size of the thing (35 miles across at places) but the regularity and predictability of its eruptions, combined with the impending end of its rather lengthy cycle. Here’s how naturalist and writer Tim Cahill sums things up in his pleasant little book Lost in My Own Backyard: A Walk in Yellowstone National Park (2004).

This is just a particularly striking if picturesque example of the problem we face. Other candidates for End of the World As We Know It scenarios include a sizeable meteorite, comet, or errant planetoid striking Planet Earth; a star in our celestial neighborhood going supernova; a sustained nuclear exchange; and so forth. [See here for other scenarios.] This isn’t science fiction; one of these scenarios could very well come to pass before too many centuries elapse. But few of us seem to be losing any sleep over this. Why not? A few explanations leap to mind.

My impression is that few people, whether believers or not, seem capable of wrapping their minds around the End of the World as a natural event. But we do seem capable of coming to grips with the concept in theological terms, eschatology being the particular branch of theology that specializes in this sort of thing. Which brings me to The God of Hope and the End of the World (2002) by John Polkinghorne, a physicist turned theologian. If you are one of those sensitive souls that lose sleep over things like this, I certainly recommend the book. Polkinghorne sees grounds for hope, Christian hope, despite the inexorable probabilties of supervolcanoes, comets, etc.

Hope for what? Not simple immortality — that’s too shallow, even selfish. I believe hope is rooted in our conviction that justice should, in the end, prevail over the evils of this world and that innocent suffering should be redressed. This conviction is reflected in the simple lines of the Lord’s Prayer, “deliver us from evil” and “thy will be done in earth.”


The contemporary cultural context that we have been discussing clouds recognition of the religious nature of hope, for it is prone to confuse it with optimism or with wishful thinking. Janet Soskice comments that even in the churches today there is a tendency to represent hope as if it were a psychological mood. “Lack of faith and charity can be treated by prayer, but lack of hope is treated with antidepressants.”

Because hope is much more than a mood, it involves commitment to action. Its moral character implies that what we hope for should be what we are prepared to work for and to bring about, as far as that power lies in us. (p. 47-48.)

It would be wrong, of course, to suggest that all atheists are nihilists or that all nonbelievers are necessarily practitioners of despair. But hope is plainly correlated with, if not entirely dependent on, belief.


Holding in mind such a clear-eyed view of the woes and disappointments of history, one must ask what could then be the ground of a true hope beyond history? There is only one possible source: the eternal faithfulness of the God who is the Creator and Redeemer of history. … It is only God who can bring new life and raise the dead, whose Spirit breathes life into dry bones and makes them live (Ezekiel 37:9-10). Hope lies in the divine chesed, God’s steadfast love, and not in some Hellenistic belief in an unchanging realm of ideas or an intrinsic immortality of the human soul. Christian trust in divine faithfulness is reinforced by the knowledge that God is the One who raised Jesus from the dead. Only such a God could be the ground for that hope against hope that transcends the limits of any natural expression. (p. 94-95.) 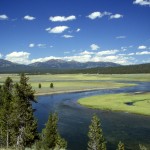 I like the idea raised by Polkinghorne that that hope is a moral stance, a commitment to action, and that we should work toward what we hope for. If Mormon hope differs in any sense from a more general Christian hope, that view probably captures it. This line expresses that thought in anecdotal form: “There is an apocryphal saying attributed to Martin Luther, in which he declared that if he knew that tomorrow the world would end, he would plant an apple tree today” (p. 102). So planting things that live and grow — or even just admiring them while strolling through a park or garden — reflects our hope against hope that there’s more to the End of the World than meets the natural eye. And that is a comforting thought.

← How to write a revelation
A Mormon Image: Cemetery in Carrol County →

16 comments for “The End of the World”