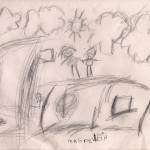 I had a rather formative and utterly unique experience in Elders Quorum a few years ago. I taught the Mother’s Day lesson and at the end, after bearing my testimony, not one soul said “Amen.” Instead, there was a sea of blank faces staring silently back at me and a palpable atmosphere of discomfort. It actually happened. I’m not exaggerating. It really, that is really, took the wind out of me. I floundered, completely unequipped for how to deal with my quorum’s reaction. For a while I fluctuated between shock, hurt, outrage, and offense. Overall I felt completely rejected by my quorum, and felt like they collectively rejected one of our basic and most precious truths.

This feeling of rejection, however, has long since given way to what I now understand as an inability to deal with my violating a deeply, though not always explicitly, inculcated taboo concerning the object of my testimony: our Heavenly Mother [knowing that many of you will be either curious or skeptical concerning the full content, here’s what I did: I reviewed Zina Diantha Huntington Young’s well known statement of Joseph teaching her about Heavenly Mother, Eliza’s insights, and then bore a heartfelt testimony of their truth and how much it meant to me]. It was not rejection that I was receiving from my quorum, but surprise and complete lack of experience. The collective reaction was spontaneous, not a matter of intention or inference. It was the result, I believe, of our failure as a people to cherish among the greatest treasures of the Restoration: our understanding of the eternal family and our doctrine (as prophetically proclaimed and recently quasi-canonized) that our exalted Father is exalted through his living a celestial, eternal life with our Heavenly Mother. This is as clear a case as I know of the scriptural curse being fulfilled (stated and repeated explicitly in various places and captured in several parables and stories) that when we reject the light and truth that God has given us, we lose it.

That’s my diagnosis. We, collectively, and particularly in the recent past, have not only failed to follow up on what is undoubtedly among the most profound truths of the Restoration, but likewise neglected even the bare glimpse of eternity that we’ve been entrusted. Consequently, what little we have has withered.

Much has been said about Heavenly Mother recently, some of which has been more in depth and more eloquent than I can manage (I highly recommend Dr. Paulsen’s comments as a background, and many of you will recognize Margaret Toscano in my negative comments and Kevin Barney [see Dialogue 41 no. 4 2008] in my positive suggestions). But the taboo is still significantly in force, we’ve still failed to determine appropriate ways of treating Her in our public and religious discourse, and the topic is so poignant, so weighty, so worthwhile as to warrant another post – lots of posts, lots of honest, faithful, acroamatic dialogue. I look forward to a fruitful dialogue on the subject here at Times and Seasons.

I’m going to suggest some positive and what I believe are completely orthodox ways that we can honor our Heavenly Mother and overcome our curse. But first, inevitably, I’m going to respond to some of the frail and literally damnable, but also ubiquitous, even platitudinal excuses that have helped to reinforce the cultural taboo under which we bury She who gave us life.

There are others, but these are the most common excuses, and I really don’t want this post to be primarily negative. This last point leads us into the positive portion of our discussion: orthodox ways of taking up our Heavenly Mother at church and in our homes.

To begin, there is another inevitable preamble that must be inserted: I really am trying to get at orthodox ways of honoring and discussing Heavenly Mother. There are lots of unorthodox things you can do, some of which might even get you into ecclesiastical trouble, others of which will merely be personal – things you don’t want to share publicly. The rule of thumb here, as instructed by Elder Pinnock while on my mission, is not to presume to teach things other than what has been specifically laid out in the scriptures and prophetic revelations and declarations of our day. And of course, don’t flagrantly violate the direct counsel of Church leaders on this (or other) matters. I’m quite confident that nothing I say here does so. I trust that the well-meaning souls who have been willing to read to this point will let me know if I do otherwise.

And now on to my suggestions:

I hope these thoughts have been worthwhile. I desperately hope that we can overcome the curse of ignorance we currently operate under. It’s not just our women, but also our men and Zion itself that significantly loses out when we excise our Heavenly Mother from our discourse.

I would love to hear your thoughts and any other suggestions you might have.

← A Call For Papers: “Mormonism in Cultural Context”
Why would our Heavenly Father do that to anyone? →

141 comments for “In Praise of Heavenly Mother”