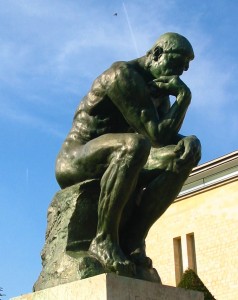 Bruce Feiler’s daughter was just five when she pitched him a question right to the gut of religious experience:  “Daddy, if I speak to God, will he listen?”

Feiler writes books on the Bible and God for a living, so he’d presumably given the question some thought. Nevertheless he had no good answer ready for his daughter. So he did what any loving parent would do:  answered the question with an inartful dodge, and then wrote about it in the New York Times style section.

How do we answer our children’s questions about God, he asked, when we are ourselves doubtful, confused, or otherwise conflicted?

Feiler solicited comments on the matter from a formerly-Catholic agnostic playwright, a formerly-Episcopalian agnostic New Testament scholar, and a popular Conservative rabbi in Los Angeles.  It’s not hard to guess the direction their responses took.  Among the educated elite readership of the NYT, a kind of ritualistic doubt partners with a set of tolerant gestures as the yin and yang of the new virtue, and self-disclosure at all times and in all things and in all places is the great personal imperative. No surprise, then, that Feiler’s panel urged conflicted parents to share their uncertainty with their children, even to validate their children’s own budding doubt.  To project an air of certainty when one harbors internal ambiguity is hypocritical, dishonest, and worst of all inauthentic.   “I believe deeply in the power of paradox and contradiction,” said the formerly-Catholic agnostic playwright.

I do sympathize with Mr. Feiler’s dilemma, despite my snarky tone here. I too wonder how I should respond when my children ask me a question on which I have little clarity myself, and it happens with some frequency.  I’m not comfortable voicing a straight-ahead Sunday school answer as if it represented my own conviction.  But unlike Mr. Feiler and friends, I’m not especially enthusiastic about the “power of paradox and contradiction” to shape children’s moral universe.

I suspect that paradox and contradiction—and doubt and uncertainty and ambiguity and the whole extended family—are stimulating spiritual states for those who otherwise enjoy a high degree of autonomy, security and certainty in their day-to-day lives. I enjoy a fine paradox and a bit of contradiction myself; after all, I am a part of that educated, affluent NYT readership.  But for children and others who live with some degree of dependence and uncertainty, I don’t know that contradiction offers the balm or backbone they seek.

What I generally do in a situation like the one described is offer some version of “Well, let’s see what the scriptures say about that.”  That is, I try to offer an answer to the question asked, but I predicate the authority of that answer not on my own personal conviction but on the scriptural text.  By turning to scripture, I avoid a situation in which I must either hypocritically profess a certainty I don’t possess or offer a pablum of hedging qualification. (I know, of course, that my children will assume that I am certain that the scriptural answer offered is true—so yes, there is still a layer of hypocrisy in my strategy.)

That’s not to say that I avoid all contradiction altogether. The scriptures rarely offer any straightforward interpretive answer to any question, no matter how basic—-therein lies much of the religious history of the West in the last 600 years.  So I will often point out that the scriptures offer several approaches to a question, and in our family scripture study I am trying to teach them a kind of elementary exegesis, paying attention to context, voice and rhetoric. And as they mature into teenagers and young adults, I expect that my strategy will change somewhat.

Is mine the best approach? To this question I heartily join Mr. Feiler in professing uncertainty. I don’t know. Certainly there may still come some reckoning wherein my children realize that I had my doubts about Santa all along. If I’ve done my job well enough, I hope, they won’t resent that, and they’ll have the moral framework and intellectual tools to launch their own spiritual inquiry.

I’d love to learn from you, though. How do you handle those discussions?