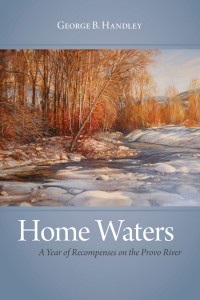 George Handley’s Home Waters: A Year of Recompenses on the Provo River (University of Utah Press, 2010) practices theology like a doctor practices CPR: not as secondhand theory but as a chest-cracking, lung-inflating, life-saving intervention.

People who flyfish know that a favorite river bend, a secluded spot in moving waters, can feel like home—a place you know intimately and intuitively. In prose that reads like the flowing current of a river, scholar and essayist George Handley blends nature writing, local history, theology, environmental history, and personal memoir in his new book Home Waters: A Year of Recompenses on the Provo River. Handley’s meditations on the local Provo River watershed present the argument that a sense of place requires more than a strong sense of history and belonging, it requires awareness and commitment. Handley traces a history of settlement along the Provo that has profoundly transformed the landscape and yet neglected its Native American and environmental legacies. As a descendent of one of the first pioneers to irrigate the area, and as a witness to the loss of orchards, open space, and an eroded environmental ethic, Handley weaves his own personal and family history into the landscape to argue for sustainable belonging. In avoiding the exclusionist and environmentally harmful attitudes that come with the territorial claims to a homeland, the flyfishing term, “home waters,” is offered as an alternative, a kind of belonging that is informed by deference to others, to the mysteries of deep time, and to a fragile dependence on water. While it has sometimes been mistakenly assumed that the Mormon faith is inimical to good environmental stewardship, Handley explores the faith’s openness to science, its recognition of the holiness of the creation, and its call for an ethical engagement with nature. A metaphysical approach to the physical world is offered as an antidote to the suicidal impulses of modern society and our persistent ambivalence about the facts of our biology and earthly condition. Home Waters contributes a perspective from within the Mormon religious experience to the tradition of such Western writers as Wallace Stegner, Terry Tempest Williams, Steven Trimble, and Amy Irvine.

If you’re unfamiliar with George Handley, you might try this.

You can also find an excerpt from the book here.