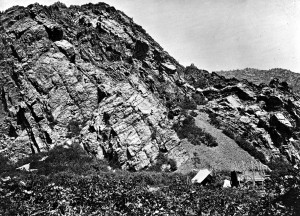 Of his awakening, Dogen says, “I came to realize clearly that mind is no other than mountains and rivers, the great wide earth, the sun, the moon, the stars.” Tinged with enlightenment, you see what Dogen saw: that life is borrowed and that mind itself is mooched. Every day you’ll need something old, something new, something borrowed, and something blue.

Mind borrows mountains and rivers, earth, sun, and sky. But you can’t just keep these things forever. Even if they weren’t quite what you wanted, they gave what they had and now some compensation is needed, some recompense is required.

“Recompense is payback,” Handley says. “It means to weigh together, to bring back into balance” (xi). What was loaned must be returned or replaced. What was given must be given back.

Nobody gets to start from scratch, not even God. To make a world is to borrow, recycle, and repurpose the matter that, even if disorganized, is already out there mattering. All creation is reorganization. Even the mind of God must mooch its mountains, cajole them, persuade them, serve them, compensate them.

This is messy and its messiness is compounded by the fact that everything is in motion. “Nothing is still,” Handley reminds us (3). Nothing can be still because recompense is itself never done. Recompense compels the world’s motion: everything is in play as everything borrows from everything else in giant, intermittently harmonious rounds of exchange, compromise, and negotiation. Leaves borrow light, cows borrow leaves, people borrow cows, worms borrow people, etc., etc. The world is the floor of the New York Stock Exchange, everyone’s a broker, and the closing bell never gets rung. The whole thing echoes Anaximander’s famous lines:

Whence things have their origin,

For they give to each other justice and recompense

In conformity with the ordinance of Time.

This is the world in a nutshell. It will die if it stops swimming. Handley sees it. He goes fly fishing, but “every time I step off the bank and into the water, the shape of the current is noticeably different. The water has risen or fallen, it is muddied, olive, or amber, the banks carved differently than before” (29). Every time he wades in, something new has been borrowed, added, or traded away.

But rivers are a cheap example. Take the mighty mountain instead. Handley sees it here too. “Mountains as landmarks belie what any hiker – or anyone with the eyes of an impressionist – knows, that a mountain never retains the same shape. There are as many mountains as there are steps it takes to climb them, or as there are angles of sun and shifts in the weather” (92). To climb a mountain is to negotiate its shifting face. You can borrow a handhold here in exchange – quid pro quo – for breaking up some ice over there.

Mountains and rivers both wake Handley’s mind to the “fundamental recognition of an ongoing creation” (130).  They wake him to the recognition that creation must be ongoing because creation is compensation. Everything must always start again – and again, and again! – because all the debt is shared, we’ve borrowed against our own lives, and what we’re borrowing is each other.

This is where things get sticky, where we begin to hear more clearly a call for re/pentance in our talk of re/compense.

We should do unto others as we would have them do unto us because we will all – inevitably, necessarily, repeatedly – be doing it unto each other. We will all impose on, borrow from, use up, and trade away parts of one another. Everyone will both repurpose and get repurposed.

Obvious problems result from all this claim-jumping: you will get borrowed as something you don’t want to be and you will have to borrow stuff that isn’t “exactly” what you wanted. Either way, our shared lives are such that the potential for offense abounds.

In response to these offenses, forgiveness must be understood as more than an occasional virtue. Rather, it must be cultivated as a baseline disposition. You will be forgiven only as you forgive, pardoned only as you pardon, free from offense only as you refuse to take it.

You’ll get lots of practice. The world will resist you, it will exceed your grasp, it will practice indifference toward you. Like a borrowed shirt, it will fit you imperfectly, it will be loose in the neck, short in the cuff, and the tag will itch. The world will irritate you, bruise you, thwart you, anger you. In the end, it will even – at least for a time – kill you.

You didn’t get what you wanted? Or even what you needed? Your life was repurposed by others for something other than what you had in mind? Join the party. I’m sympathetic, but in the end these objections are going nowhere. That bus, while always idling, never actually leaves the station. You presume a world that doesn’t exist and you fantasize a fixer-God who, unlike ours, is himself doing something other than divinely serving, borrowing and repurposing.

Ask instead: What were you given? Where were you taken? What was your recompense? Learn to like lemonade.

But you had plans? You didn’t want that recompense? Do not be so proud. You have done to others just the same. You have, in turn, taken, borrowed, and appropriated – and probably with quite a bit less grace and restraint.

What have you taken? At what cost? What recompense have you been withholding from whom?

You’ve been using up mountains and trees, the great wide earth, the sun, the moon, the stars? You’ve been drinking the rivers dry? You’ve been repurposing your spouse, your children, your parents, your friends? You’ve borrowed and wasted at your own convenience? You’ve squeezed hard, turned their other check for them, and then squeezed again? Nursing grievances, you’ve justified such actions with accusation and, often enough, even invoked God in your defense?

This, Handley suggests, is a kind of “ecological apostasy” (130). For my part, I doubt that there is any other kind.

We need to wake up to the recompense of what has been given. We need to freely offer that recompense in return. “We need,” as Handley advocates with a borrowed phrase, “to learn to think like a mountain” (xv).