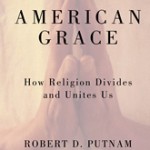 Here is Part II of our 12 Questions interview with David E. Campbell, co-author of American Grace: How Religion Divides and Unites Us (see here for Part I). In this half of the interview Campbell answers questions related specifically to his and Robert Putnam’s research concerning Mormonism.

1. Mormons feature prominently in this book. I’m biased to say that this is because, as you state on page 15, Mormonism is a “highly distinctive tradition[] that, because of [its] size, [is] often neglected in analyses of the American religious environment.” Despite our currently being in “the Mormon moment,” however, I suspect that many would claim that the prominence of Mormonism in your study is merely a result of your being one of the authors. How legitimately is Mormonism stacked up alongside the other traditions you analyze in order to accurately gauge the American religious scene? And can you speak to the reaction of your audience at large with regard to your discussion of Mormonism and its prominence in your analysis?

I confess that I wondered myself whether reviewers would criticize the book as featuring Mormons too prominently. (As an aside, you may be interested to know that our chief ethnographer, Shaylyn Romney Garret, is also LDS). I can report that, thus far, no one has raised this as an issue. To the contrary, one prominent scholar (non-LDS) who reviewed an early version of the manuscript actually suggested that we say more about Mormons!  But if someone were to bring up the role played by Mormons in the book, I am happy to defend placing Mormonism alongside the other major religious traditions in the United States. Numerically, there is no question that Mormons deserve to be studied. But, just as importantly, Mormons truly are distinctive sociologically, and have received short shrift in the empirical study of religion. Indeed, my next book will be an exploration of Mormons and politics, as there is a need for a book that carefully examines Mormons’ political beliefs and behavior.

2. It seems that the aim of the book is twofold: first, to give sociological evidence that religious diversity and personal spiritual fluidity have been a positive phenomenon in recent times that has (surprisingly) served to harbor religious tolerance in America; second (more implicitly), that our religious diversity ought to harbor tolerance. In what ways has Mormonism as a religious tradition added to or detracted from this public spirit of tolerance?

The story of Mormons and religious tolerance is double-sided. On the one hand, Mormons themselves are very accepting of other religions. Mormons rate other religions very highly. Given the emphasis placed on the great apostasy within LDS teachings, I would not have necessarily predicted that Mormons would be so warm toward other religions. The explanation appears to be that Mormons are also the most likely to say that people of other religions can go to “heaven.” Readers of this blog will, of course, recognize that such a question has a unique meaning in Mormonism. In LDS theology, heaven might be thought to mean a degree of glory, even if it falls short of the celestial kingdom. But, perhaps even more importantly, the doctrine of redeeming the dead opens an avenue to the highest degree of post-mortal glory. That is, the LDS emphasis on redeeming the dead appears to foster an appreciation for other religions, notwithstanding Mormon teachings about the apostasy. The future apparently outweighs the past.

That’s the good news. The bad news is the fact that Mormons are viewed very negatively by people of most other religions. Why is that? The data are clear: Mormons have “cocooned” themselves into religiously homogeneous social networks. And I emphasize that this is not only true for Utah Mormons, or Mormons who live in heavily LDS communities. By being so insular, Mormons do not often build bridges to people of other religions, and thus do not benefit from the good feelings that accompany such personal relationships. If there is a message for Mormons in American Grace, it is that Latter-day Saints ought to stop being so insular and instead develop inclusive social networks.

I am an optimist and so believe that because of the good feelings Mormons have toward other faiths that it is possible for Latter-day Saints to do better at befriending those of other faiths. But changing a culture is difficult.

3. Another major theme of your study concerns the rising generation’s disillusionment with religion’s (particularly conservative religion’s) political ties in American, citing this as a primary cause of young people abandoning organized religion. Despite your vignette about the “liberal” Pioneer Ward, as you acknowledge, Mormons are strongly conservative (including members of Pioneer Ward). Likewise, you note (e.g., your chart on 440) that most Mormons claim that their politics are a result of their religious beliefs. Do Mormon youth buck the trend of disillusionment? Or are we in fact seeing significant attrition on account of what you call the “If A then B” bias that believing Mormons ought to be Republican? There have been a number of prominent discussions lately (like this one) about a significant change amongst younger Mormons leaning more to the left; does your own research speak to such claims?

Unfortunately, our data are unable to speak to trends in the political attitudes of young Mormons, simply because we do not have enough Mormons to divide them up by age-cohort. In other data I have examined I actually see little evidence that young Mormons are shifting leftward. As just one, but very important, example, Mormons under age 30 are just as likely to identify as Republicans as Mormons who are age 30-49 and 50-64. Sixty percent of Mormons identify as Republicans in all three of those age groups. (Those 65 and older are a little more likely to be Republican, as 66 percent of them identify with the GOP). These numbers are taken from data collected by You-Gov Polimetrix as part of a nationwide study known as the Cooperative Congressional Election Study.

However, trends in the politics of small population groups are difficult to track accurately, so it is entirely possible that there are political changes afoot that may lead young Mormons to shift leftward. If any issue could cause young Mormons to reconsider their attachment to the Republican Party, it is immigration. Mormons of all ages are more liberal on immigration policy than the population as a whole, and far more than other politically-conservative groups (like evangelical Protestants). Given that young people are more likely than their elders to switch party allegiances, if immigration were to cause a political shift among Mormons, I would expect it to occur among the young.

4. You note that “Mormons, especially Mormon women, appear to be the only substantial holdouts against the growing and substantial consensus across the religious spectrum in favor of women playing a fuller role in church leadership.” Nevertheless, I was rather surprised by your numbers: 30% of Mormons favor female clergy: 48% of men favoring it but only 10% of women. What do you think these numbers say about Mormon culture with regard to women and ecclesiastical authority? And what is behind the dramatic discrepancy between men & women’s feelings on this issue in the church?

Interestingly, this same issue has arisen on the Exponent II blog, where it has spurred a fascinating discussion. Those who want to explore this issue further can do so at http://www.the-exponent.com/ [see here].

In brief, let me note that I would caution that statistics for subgroups (men vs. women) of a small group (Mormons) have a wide margin of error or, more technically, confidence interval. Thus, while we can have confidence that Mormon men and women differ on the question of whether women should be clergy, which for Mormons would mean holding the priesthood, I would not be terribly confident in the precise numbers. Nonetheless, this leaves the question of why there is any difference, and why women are less likely than men to say that Mormon women should hold the priesthood.

Part of the explanation is simply that, as has been noted, Mormon women are more likely to be religious traditionalists than men. In the LDS context, believing that the priesthood should be held by men only is certainly the traditionalist position.  But that is probably not the whole explanation. I also suspect that those women who truly object to a male-only priesthood have left the LDS Church and would not report their religious identification as Mormon. For men, this is less likely to be a make-or-break issue, and so a “feminist Mormon male” is more likely to remain in the faith. Consequently, when Mormon women are asked this question they presumably have thought about the issue and therefore made peace with the role of women in the LDS Church.

5. You discuss congregation shopping and note various reasons why persons will switch congregations. Given that Mormon “shopping” is rather limited (while one might “shop” when deciding which part of a city they want to live in, our nearly uniform style of worship rather defeats the purpose), how would you extend this research to Mormonism? Do we see similar patterns in Mormons who leave the faith? Is it right to presume that shopping religions is more rare than shopping congregations?

It is also correct that Americans are more likely to switch congregations than religions. But, as you note, switching LDS wards is not likely to change much about one’s worship experience. And it would definitely not mean much of a change in what is taught over the pulpit or in Sunday School lessons, etc. Thus, when Mormons are unhappy with their religion, it seems more likely that it would result in becoming inactive or even leaving the faith rather than switching wards (which Church policy makes difficult, although I have found that just how difficult varies according to local leadership). In American Grace, we report that Mormons are about as likely to leave their faith as are evangelicals, but that both groups have much lower switching rates than Catholics or mainline Protestants. So, comparatively speaking, Mormons have a high retention rate. This is undoubtedly due to the emphasis placed on religious education and on the relatively low interfaith marriage rate among Mormons. But while comparatively high, the Mormon retention rate is still only about 60 percent. In other words, two out of five people raised as Mormons drop out of the faith in adulthood.

6. Your research shows Jews to be—broadly speaking—the “best liked religion in the country.” This fact appears to be in spite of their geographical concentration and relatively small numbers—variables you cite as leading to suspicion and intolerance, with Mormons, Muslims, and Buddhists as prime examples. Why the difference between Jews and Mormons? Mormons also seem a counterexample to your claim that shared goals lead to increased tolerance, given several decades of Mormon partnering with evangelicals on social issues. What is it that is uniquely off-putting about Mormons? Or are we simply a bit behind and soon to catch up to  Jews? If so, what’s kept us lagging?

Actually, there is a big difference between Jews and Mormons that helps to explain the difference in how the two groups are perceived. Jews engage in a lot more “religious bridging” than Mormons. While, as noted above, Mormons are one of the the most religiously insular groups in America, Jews are one of the least.

On the question of Mormon-evangelical partnering: the fact that Mormons are perceived so negatively by evangelicals in spite of their shared political positions should serve as a sobering lesson. Politics make strange bedfellows, but it does not necessarily win you friends. The sort of contact that we hypothesize leads to religious tolerance consists of personal relationships, not simply shared political goals.