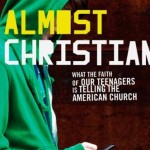 I recently finished Almost Christian: What the Faith of Our Teenagers Is Telling the American Church (OUP, 2010) by Kenda Creasy Dean, a professor at the Princeton Theological Seminary. Chapter 3, entitled “Mormon Envy,” naturally attracted my attention.

Almost Christian relies in large part on data gathered by the National Study of Youth and Religion and on an earlier book presenting results from that sociological study, Soul Searching: The Religious and Spiritual Lives of American Teenagers (OUP, 2005). But Dean’s interest is more in what the results mean for youth ministers of mainline Protestant denominations. The news is not good, as documented in Part 1, “Worshipping at the Church of Benign Whatever-ism.” The chapter titles — “Becoming Christian-ish” and “The Triumph of the ‘Cult of Nice'” — pretty much tell the story. Mainline Protestant teens are generally not developing a Christian or denominational identity. Instead, they are implicitly adopting the norms of Moralistic Therapeutic Deism, a term borrowed from Soul Searching. And it’s not really the fault of the teens — they are, suggests Dean, in large part simply responding to the explicit teaching and implicit cues they are getting at church and at home. Enter the Mormons.

As recounted in Chapter 3, Mormon teens (as well as teens from black Protestant and conservative Protestant congregations) buck the trend. Here’s how Dean describes this group of teens:


Highly devoted young people are much more compassionate, significantly more likely to say they care about things like racial equality and justice, far less likely to be moral relativists, to lie, cheat, or do things “they hoped their parents would never find out about.” They are not just doing “okay” in life; they are doing significantly better than their peers, at least in terms of happiness and forms of success approved by the cultural mainstream. … For highly devoted young people, faith is a big deal. They “own” their traditions, possess articulate and integrated theologies, and draw significantly from their religions’ faith stories to influence their decisions, actions, and attitudes.

Regarding what works for Mormon teens in particular, Dean notes early morning seminary, the sense of family and community fostered in LDS homes and congregations, and the twin goals of missionary service and temple marriage that loom so large for LDS teens. Parents, youth leaders, and congregations as a whole all contribute to what are apparently very successful outcomes for LDS teens compared to what the data show for most other American teens. Reading the chapter and the book, I kept expecting the other shoe to drop — for Dean to talk about what, despite the numbers, is wrong with the LDS approach — but that discussion never appeared. Her interest, as noted above, is in how to do better for mainline Protestant teens, and she largely focused on that goal for the balance of the book, without much additional reference to LDS or conservative Protestant approaches.

I took a couple of things away from the book. First, the data appear to be saying that we LDS are doing a pretty good job with our youth. I’m not sure that is always evident at the local level, but the data seem to be telling us that the effort that is put into seminary, Sunday lessons, weekly activities, and family home evening does bear fruit in the faith and conviction of LDS youth.

A second point is that the enemy is not necessarily Babylon — the raucous alternative secular lifestyles that surround us — it is watered down religion: Moralistic Therapeutic Deism. Dean summarizes the tenets of MTD as: (1) God exists and watches over life on Earth; (2) God wants people to be good, nice, and fair to each other; (3) the purpose of life is to be happy and to feel good about yourself; (4) God is not involved in my life except when I need him to solve a problem; and (5) good people go to heaven when they die.

Are Momons immune to MTD? Or is the impact on LDS youth and LDS teaching just delayed a generation or two? Think hard about those five characteristics of MTD and tell me you haven’t heard them presented in Sunday talks or even General Conference talks. Moralism and a therapeutic approach are certainly on the rise in LDS rhetoric. Will Correlation save us from MTD? Or will our next generation be almost Mormon?