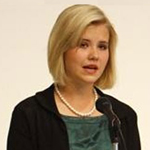 Times and Seasons has selected Elizabeth Smart as Mormon of the Year for 2010.

Elizabeth Smart has been in the public eye this year in the United States and around the world as the chief witness in the trial of Brian David Mitchell, who abducted her in 2002. And her testimony gave her significant influence, despite her apparent distance from the spotlight while serving on an LDS mission during 2010. In her testimony, Smart showed a poise and decorum that is rarely found among private individuals thrust into the public spotlight.

Central to Smart’s impact is her religion. Mormonism was part of what the public knew about her from the beginning, and was part of the story of her testimony at the trial. While Smart’s impact is rooted in her abduction, and thus in being a victim, in succeeding years she has also become known for her own actions — for her activism in favor of Sexual Predator legislation and the AMBER Alert system, and in support of kidnapping victims. More recently, she is also known for serving an LDS mission, where she is giving a very different kind of testimony.

Her impact is particularly notable because it has spread so widely around the world, in contrast to that of other nominees. Many in the public around the world not only know Smart’s story but know that she is Mormon. Her story has appeared in thousands of articles and media presentations worldwide since 2003, inspiring those in far-flung countries to create websites devoted to her character. Religious sites, from various denominations, have used her as an example of hope and final victory. The Bobby Roth’s drama-documentary “The Elizabeth Smart story” has been translated in numerous languages and is still regularly shown on foreign TV-channels.

The 2010 trial has been covered by news outlets as diverse as the Norwegian Dagbladet and NRK, the German Die Welt, Bild, and Salzburger Nachrichten, the Icelandic MBL, the Estonian Ohtuleht, the Romanian EVZ, the Danish Jyllands-Posten, the Portuguese Lux, the Polish Wiadomosci, Strefa tajemnic, and Gazeta, the Slovak Noviny, the Spanish El Mundo and El Diario, the Italian Il mio giornale and Giornalettismo, the Korean Paran, the Vietnamese Xaluan, etc. Often compared to the ordeal and miraculous escape of the Austrian Natasha Kampusch, Elizabeth Smart’s story has galvanized efforts worldwide to do the utmost to search for missing children and to never give up hope.

Unlike those we have selected before, Smart is young, and still has much of her life ahead of her. News reports have covered some possible plans and career paths. It will be interesting to see what impact Smart may have in the future.

The Mormon of the Year designation is a recognition of the effect that a person or group has had during the past year. It is not a prize or award, so nothing of value is being given to anyone as a result of this designation, and it is not necessarily meant to honor the person or persons recognized, so no effort will be made to contact or notify Smart.

We were very pleased by the interest in selecting the Mormon of the Year. Times and Seasons readers nominated 23 possibilities in addition to the original 5. We learned a lot from those nominations, especially the range of our readers’ beliefs and feelings. Some of the Mormons we learned have done significant things and deserve to be on a list of possible Mormons of the Year.

The LDS Church’s First Presidency (including the Prophet) and Quorum of the Twelve Apostles were excluded from nominations.

We also appreciate those who participated in our online vote or commented on the nominations, which taught us a lot about the passion that many people have for those that they admire. Nearly 500 people voted in our poll, including many readers new to Times and Seasons. We hope that those who dropped by enjoyed Times and Seasons and will visit us again.

Please plan on participating in next year’s Mormon of the Year nominations. I’m sure that many of the nominees will show up next year, and those of us who were unfamiliar with some of the nominees can use that time to become more familiar with them. Certainly we will re-nominate some of them next year. And, as we discovered this year, the changing nominations make the selection process very different each year.

21 comments for “Times and Seasons’ 2010 Mormon of the Year: Elizabeth Smart”