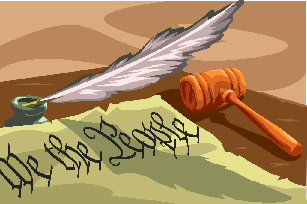 Looking back at last year’s MOTY post, I came across a comment I had not seen before. Having been raised hearing about the vast differences between communism and the United Order — and how communism was actually a counterfeit of God’s community — I was surprised that the comparison was being made.

This was coupled with a discussion I had two days ago with Belinda, one of my children attending BYU. She just started a church history class and we were talking about the first chapter in her text. It discusses the divine nature of the founding of the United States and how this land was the only place on earth the gospel could again be restored.

Given the current political climate, when more and more of America’s founding principles are seen as outdated and flawed, I thought I’d present some quotes from past church leaders on the differences between the two systems, as well as some support for the US Constitution and the government that follows.

I’ve tried to keep the context as accurate as possible. I’m not a political expert — more like a coerced activist — and make no claims about the material. Just putting it out for thoughtful discussion.

The fundamental principle of [the United Order] was the private ownership of property. Each man owned his portion, or inheritance, or stewardship, with an absolute title, which he could alienate, or hypothecate, or otherwise treat as his own. The Church did not own all of the property, and the life under the United Order was not a communal life, as the Prophet Joseph, himself said. The United Order is an individualistic system, not a communal system.

…when the Welfare Plan gets thoroughly into operation…we shall not be so very far from carrying out the great fundamentals of the United Order.

There is a growing—I fear it is growing—sentiment that communism and the United Order are virtually the same thing, communism being merely the forerunner, so to speak, of a reestablishment of the United Order. I am informed that ex-bishops, and indeed, bishops, who belong to communistic organizations, are preaching this doctrine.

The basic principle of all the revelations on the United Order is that everything we have belongs to the Lord; therefore, the Lord may call upon us for any and all of the property which we have, because it belongs to Him. This, I repeat, is the basic principle.

One of the places in which some of the brethren are going astray is this: There is continuous reference in the revelations to equality among the brethren…Obviously, this is not a case of “dead level” equality. It is “equality” that will vary as much as the man’s circumstances, his family, his wants and needs, may vary.

…basic to the United Order was the private ownership of property, every man had his own property from which he might secure that which was necessary for the support of himself and his family.

There is nothing in the revelations that would indicate that this property was not freely alienable at the will of the owner. It was not contemplated that the Church should own everything or that we should become in the Church, with reference to our property and otherwise, the same kind of automaton, manikin, that communism makes out of the individual, with the State standing at the head in place of the Church.

…it was intended…that the poor coming into Zion…were to have given to them a “portion” of land, which land was to be either purchased from the Government…or purchased from individuals, or received as consecrations from members of the Church.

…whatever a steward realized from the portion allotted to him over and above that which was necessary in order to keep his family under the standard provided…was turned over by the steward to the bishop, and this amount of surplus…went into a bishop’s storehouse…for caring for the poor the widows and orphans and for the elders of the Church engaged in the ministry.

…[Communism] even reaches its hand into the sanctity of the family circle itself, disrupting the normal relationship of parent and child, all in a manner unknown and unsanctioned under the Constitutional guarantees under which we in America live.

“The Gospel and the Individual” 903

Above all else, strive to support good and conscientious candidates of either party who are aware of the great dangers inherent in communism, and who are truly dedicated to the Constitution in the tradition of our founding fathers.

America is big enough to make room for many different kinds of thinking, but many liberals have claimed to see virtues in socialism and communism which I, for one, have not been able to find.

Paraphrasing Nikita Khrushchev, after hosting him as a state visitor on an official trip to the US, as directed by Eisenhower. Khrushchev (First Secretary of the Communist Party of the Soviet Union) had told Benson that Benson’s children would live under communism. When Benson objected, this was the response:

You Americans are so gullible. No, you won’t accept communism outright. But we’ll keep feeding you small doses of socialism, until you’ll finally wake up and find you already have communism. We won’t have to fight you. We’ll so weaken your economy until you fall, like overripe fruit, into our hands.

Since Communism, established, would destroy our American Constitutional government, to support Communism is treasonable to our free institutions, and no patriotic American citizen may become either a Communist or supporter of Communism…

Furthermore, it is charged by universal report, which is not successfully contradicted or disproved, that Communism undertakes to control, if not indeed to proscribe the religious life of the people living within its jurisdiction, and that it even reaches its hand into the sanctity of the family circle itself, disrupting the normal relationship of parent and child, all in a manner unknown and unsanctioned under the Constitutional guarantees under which we in America live. Such interference would be contrary to the fundamental precepts of the Gospel and to the teachings and order of the Church.

We call upon all Church members completely to eschew Communism. The safety of our divinely inspired Constitutional government and the welfare of our Church imperatively demand that Communism shall have no place in America.

We again warn our people in America of the constantly increasing threat against our inspired Constitution and our free institutions set up under it. The same political tenets and philosophies that have brought war and terror in other parts of the world are at work amongst us in America. The proponents thereof are seeking to undermine our own form of government and to set up instead one of the forms of dictatorships now flourishing in other lands…

…Communism and all other similar isms bear no relationship whatever to the United Order. They are merely the clumsy counterfeits which Satan always devises of the gospel plan. . . . Latter-day Saints cannot be true to their faith and lend aid, encouragement, or sympathy to any of these false philosophies. They will prove snares to their feet.

Every faithful Latter-day Saint believes that the Constitution of the United States was inspired of God, and that this choice land and this nation have been preserved until now in the principles of liberty under the protection of God…

I Socialism Wrong? And What is Socialism? scroll down for authoritative quotes
By Brian Mecham

130 comments for “United Order Vs. Communism”