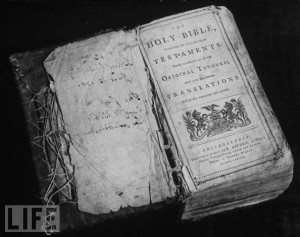 The irony of religious fundamentalism is that it is a profoundly modern and profoundly secular phenomenon. This is perhaps especially true of the scriptural literalism that often accompanies it. The result is that many of the most conservative Mormons are, in point of fact, also the most secular.

Why is fundamentalism so profoundly secular? Because it cedes the field of truth wholly and without contestation to secular models of truth – and then tries to combat, contest, and outdo the secularists at their own game.

Is there a better example of this acquiescence to the secular paradigm than Joseph Fielding Smith’s Man, His Origin and Destiny?

Ironically, when people argue for creation science or for what is usually called a literal reading of the Bible, they are agreeing with the secular understanding of things. They use conceptual structures taken from secularism, such as the necessity that explanations have a scientific form, to try to understand the Bible. Some give up or metaphorize the Bible when faced with the project of making the Bible and science answer the same questions, but some keep the Bible and insist that its account can be brought within the secular myth, though of course they would not say that is what they are doing. But both those who metaphorize and those who would make the Bible scientific do essentially the same thing: they begin from a secular understanding of the Bible. Thus, Gilkey shares the view of those we often refer to as “biblical literalists.” Both assume that secularism gives us the basic structure of understanding and that all accounts must be hung on that structure. They disagree about what conclusions that leads one to, but they agree that the secular myth is the one that must be used for understanding. (73, emphasis mine)

Both “liberal” and “conservative” Mormons fall into the same trap. They assume the truth of the secular myth, that secularism give us the basic structure for all legitimate understanding. To ardently claim biblical literalism or to casually dismiss scripture as “metaphorical” amounts, in the end, to the same thing: impoverishment.

When the Bible tells us how the world was created, however, it does so with interests, goals, and basic assumptions so different from those of science that we ought to be suspicious of claims that both are answers to the same question, “How did the world come to be?” (73)

The interest of the biblical origin stories is much more on things like how the human condition came to be what it is, how evil came into the world, and why the covenant applies to each person than it is in the physical processes involved in creation. (74)

The secular has its place, but the gospel of Jesus Christ is not secular – that is, it is neither conservative or liberal.

The gospel of Jesus Christ is Mormon.