There are two main goals in this critical text project. The first is to restore by scholarly means, to the extent possible, the original English-language text of the Book of Mormon. This original language text is, I believe, what Joseph Smith received through a physical instrument – either the Nephite interpreters (later called the Urim and Thummim) or the seer stone – and read off to scribes. The second goal of the critical text project is to determine the history of the Book of Mormon text, in particular the kind of changes that it has undergone, both accidental and editorial. Most of the editorial changes have been of a grammatical nature.

The largest part of the work in recovering the original text involves two manuscripts. The most important of these is the original manuscript (O), the one that Joseph Smith dictated to his scribes. The other manuscript is called the printer’s manuscript (P), and it is a copy of the original manuscript. This second manuscript is the one that was prepared to take to the Palymra, New York, printer E. B. Grandin in 1829-30 to set the type. In addition to the two manuscripts, I have considered 20 printed editions of the Book of Mormon in the critical text project: 15 LDS editions, one private edition from 1858 (the Wright edition), and four RLDS editions (the RLDS Church is now known as the Community of Christ).

Approximately 28 percent of the original manuscript is extant. (In calculating this percentage, I exclude the 116 pages that were lost by Martin Harris in 1828.) In 1841 Joseph Smith placed the original manuscript in the cornerstone of the Nauvoo House, a hotel being built in Nauvoo. The manuscript lay there in the cornerstone for the next 41 years until in 1882 Lewis Bidamon, the second husband of Emma Smith’s, after her death, retrieved the manuscript. Most of it was severely damaged by water that had seeped in; much of it had been eaten away by mold.

Bidamon gave most of the larger manuscript portions to LDS people. As a result, 25 of that 28 percent has ended up in the archives of the LDS Church. The LDS portions cover from 1 Nephi 2 to 2 Nephi 1, from Alma 22 to Alma 60, and from Alma 62 to Helaman 3, and include other minor fragments. There is also half a leaf at the University of Utah (from 1 Nephi 14). And the equivalent of a leaf in fragments is held privately (from Alma 58 to Alma 60).

Of great importance for this project has been the discovery of two percent of the text that Wilford Wood, a collector from Bountiful, Utah, bought from Charles Bidamon, the son of Lewis Bidamon, in 1937. The majority of the Wilford Wood fragments are found in three parts of the text: from 2 Nephi 5 to Enos 1, from Helaman 13 to 3 Nephi 4, and from Ether 3 to Ether 15.

We will now have a look at some of the Wilford Wood fragments. We begin with the lump of fragments as they were observed on 30 September 1991, at the beginning of the conservation of these fragments: 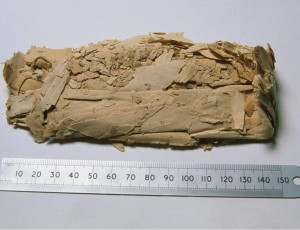 Next we see Robert Espinosa, then the head of conservation at BYU’s Harold B. Lee Library, beginning the very difficult task of teasing apart these fragments: 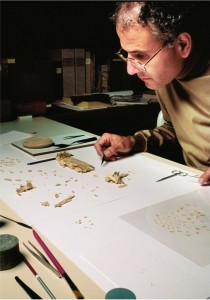 Now consider one of the more interesting fragments found in this lump. This is how it appeared when first removed from the lump, all rolled up:

After it was unraveled, we could see the uneven edges where mold had eaten away parts of the leaf: 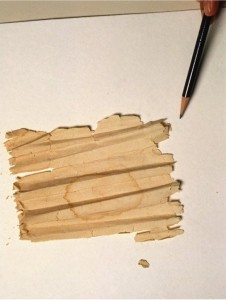 In addition, there was a large water stain in the center of the fragment, resulting from the water that had gotten into the cornerstone.

After the fragment was leveled and photographed, we could basically see what was there: 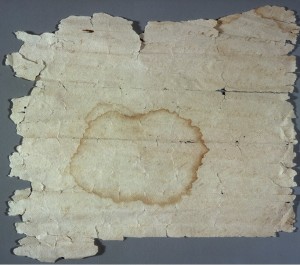 The text for this fragment is in the hand of Oliver Cowdery; the ink was originally black and has turned brown over time. We found that black and white ultraviolet photography brought out the text best of all: 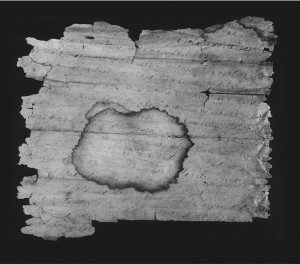 This fragment of the original manuscript comes from 2 Nephi 7-8. When Oliver copied this particular portion of the text into the printer’s manuscript, he made six changes, of which five were accidental. For this part of the text, he was copying an Isaiah quotation, which is difficult enough. Even so, the relatively high number of errors for this single page was unusual for Oliver; he was probably getting tired as he was making the copy here. But it also turns out that he made one conscious change here, a grammatical one, when he changed they dieth to they die as he copied the text into the printer’s manuscript. 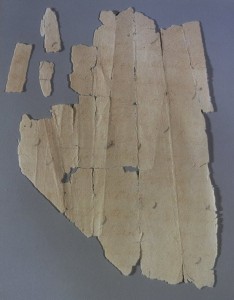 The pencil marks were placed here by the 1830 typesetter, John Gilbert. About one third of the time Gilbert marked up his manuscript in advance of doing the typesetting. Overall the evidence is that he used the original manuscript from Helaman 13:17 through the end of Mormon.

Here is the black and white ultraviolet photograph for the same part of Helaman 15; as one would expect, the pencil marks don’t show up as well in a black and white photo: 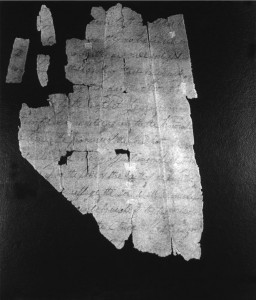 To give you an idea of what the printer’s manuscript looks like, here’s a photo of the first page: 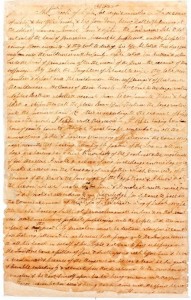 Note that the bottom portion of the first leaf has been worn away; on each side of this leaf, about one and a half lines of text are missing. This page is in Oliver Cowdery’s hand.

We now turn to a blown-up section from that first page of the printer’s manuscript. For these lines there are a number of corrections:

On the third line, two words, to be, are crossed out. Written above the crossout is a grammatical correction that Joseph Smith made, namely, the word is. Joseph made this change from to be to is (and others like it) when he edited the printer’s manuscript for the second edition of the Book of Mormon (published in 1837 in Kirtland, Ohio). On the next line – you can barely see it – after the word knowledge there is a capital letter P that was added by the 1830 typesetter. It’s above the line, written in pencil, and it tells the typesetter to start a new paragraph at this point.

There are a couple of other corrections here that were made by Oliver Cowdery when he originally wrote down the text for the printer’s manuscript. Sometimes he missed some words or wrote something wrong, which he then corrected, often by inserting words above the line. In the last line shown here, Oliver originally wrote the word that, then he crossed it out and wrote the above the crossout. These kinds of corrections in copywork were frequently made by the original scribe for the printer’s manuscript. And we also find corrections like these in the original manuscript.

Next we have what is called a facsimile transcript (or typographical facsimile) for this part of the manuscript:

As part of the critical text project of the Book of Mormon, we have produced transcripts like this one in order to faithfully record what’s actually on the manuscripts. Note, for instance, that in this case the word prophets was misspelled as prophits in the next-to-last line. And destroyed was spelled as destroid in the last line. In each instance, we leave it to the reader to figure out what the intended reading is. Most of the time there isn’t any problem.

Since 2001 I have continued work on three other volumes. Volume 4 was completed last year (in 2009). This volume is called Analysis of Textual Variants of the Book of Mormon. There are six maroon books in that volume. They represent my work on recovering the original text, going from verse to verse, looking at all of the variants (and potential variants) in the text as well as looking at all the textual evidence, in order to determine what the original reading might have been.

Volume 3 is called The History of the Text of the Book of Mormon. This is the volume that I am currently working on. And volume 5 will be a computerized collation that will be made available with volume 3. Later in this paper, we’ll consider what that collation looks like.

Next: The Yale Edition of the Book of Mormon

[1] An earlier version of the following paper was presented 5 August 2010 at a conference sponsored by FAIR, the Foundation for Apologetic Information and Research. The text of this paper is copyrighted by Royal Skousen. The photographs that appear in this paper are also protected by copyright. Photographs of the original manuscript are provided courtesy of David Hawkinson and Robert Espinosa and are reproduced here by permission of the Wilford Wood Foundation. Photographs of the printer’s manuscript were taken by Nevin Skousen and are reproduced here courtesy of Community of Christ. The text of the Yale edition of The Book of Mormon: The Earliest Text (2009) is copyrighted by Royal Skousen; Yale University Press holds the rights to reproduce this text.

25 comments for “The Original Text of the Book of Mormon I: Major Findings of the Critical Text Project”