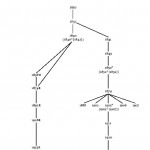 Royal Skousen is editor of the Book of Mormon Critical Text Project and professor of linguistics and English language at Brigham Young University. The first part of this series is here.

As I got near the end of completing the six books of volume 4, I discovered some potential problems with the project as originally conceived. One of the problems was in getting people, even some academic people doing research on the Book of Mormon, to cite the findings of the critical text project. These books are very large and heavy; and as a complete set, they are also rather expensive. In any event, the result was that researchers were writing articles on the Book of Mormon but, it would seem, quite oblivious to what the actual reading should be – or at least what the critical text project had to say about the reading.

Another problem that became apparent was that with the completion of volume 4 anyone could go out and produce their own original-language version of the Book of Mormon by simply using the findings of volume 4 and referring to the resulting book as the original text. I decided that it would be better if I myself retained control over this process, and so I arranged with Yale University Press to publish, in August 2009, The Book of Mormon: The Earliest Text. This book represents in one volume the original text, to the extent it can be determined. And if you take off the dust jacket of this book, you will see that the hard cover matches the maroon cover of volume 4. This was done intentionally, to show the connection to volume 4 of the critical text; in other words, the Yale edition derives from the decisions made in volume 4.

There are two important innovations in the Yale edition. The first is that it is set in sense-lines – not in small paragraphs where each verse is its own little paragraph, nor in narrow double columns. My idea, as originally conceived, was to break the lines in the text so that they would represent in some general way how Joseph Smith dictated the text – namely, in phrases and clauses, but none so long that they could not be easily read.

One of the things I have been surprised about since the publication of the Yale edition is how much readers like this format. Many readers, including scholars of the text, have seen things in the text that they have never seen before, simply because it is laid out in sense-lines. Nor do readers get fatigued as they do when reading a two-column text that frequently breaks in the middle of words (by hyphenation) or in the middle of phrases and clauses, a process that puts a lot of stress on readers in negotiating the text. With the sense-lines, it’s also much easier to keep on reading. Some readers have discovered they now read several chapters at a time instead of just the single chapter they were used to reading.

The second innovative aspect of the Yale text is that it is the first time anyone has attempted to publish the original English-language text, to the extent that it can be determined. The Yale text, it turns out, does not have what we call a copytext. It is not a revision of some particular edition of the Book of Mormon. Instead, everything has been done from scratch, so to speak; in fact, the text is directly derived from the computerized collation, as we shall see.

Here is the title page of the Yale edition: 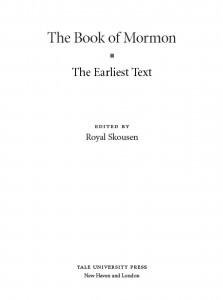 And here is the title page of the Book of Mormon itself: 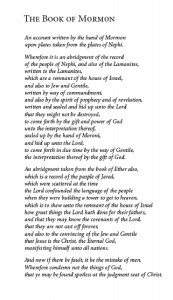 The line breaks occur at places where you could reasonably pause, especially if you were reading the text off to someone else, as in dictation. You will note, by the way, that the traditional statement about the book being translated by Joseph Smith is not on the Book of Mormon title page. That’s because it wasn’t on the original title page of the Book of Mormon. Instead, I place that attribution on the preceding page, on what we call the half title. This is the appropriate place to acknowledge Joseph Smith as the translator.

Here is the beginning of First Nephi: 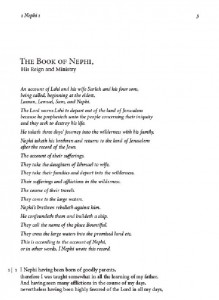 You’ll notice that the text just says “The Book of Nephi” – that’s because the manuscripts tell us that that was the original title for the book. There are, it turns out, four books of Nephi in the Book of Mormon. Later Oliver Cowdery and other editors added first, second, third, and fourth to the names of these individual books. The original text had no numbers for any of the books of Nephi. Since this is the way the original text read, we reproduce it that way in the Yale edition.

Here is the next page of the Yale edition, where you can clearly see the sense-lines: 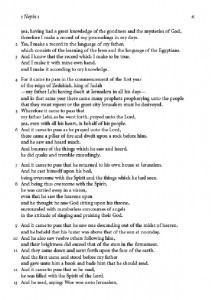 There are also extra lines of space that represent the paragraphs that I have broken the text into. You will note that overall this is a clear text, a plain text. There is not much editorial intrusion beyond the sense-lines and the paragraph breaks, although I did put the LDS chapter and verse numbers out in the left margin because readers need to reference where they are in the book.

Here is another page, one where there’s a transition from one book to another, namely, from Mosiah to Alma: 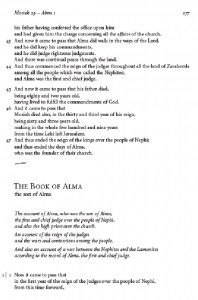 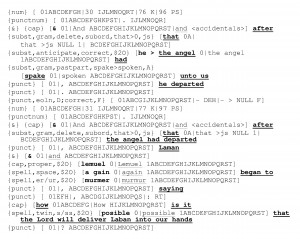 At the beginning of each line of this collation, before each textual variant, there is some indication in braces (that is, in curly brackets) of the kind of variant that will follow. Then in square brackets I give the actual variant. The very first variant in this sample from the collation is a number – in fact, it’s a verse number. The two manuscripts are represented by the symbols 0 and 1; and since the manuscripts don’t have any verse numbers, there is in this case no number assigned to the original and printer’s manuscripts. In the rest of the textual variant we find the capital letters A through T, which stand for the printed editions of the Book of Mormon (from the 1830 edition to the 1981 edition). In this instance, the majority of the printed editions have a verse number (but the particular number varies). You can go down through the collation and consider in the same way each variant in turn.

This is the proposed original text for this passage, but without any intended line breaks (that is, hard returns) or punctuation. This is much like what the 1830 typesetter was confronted with when he set the type – a long string of words with no breaks except when a new chapter begins.

From this long string of words, I then constructed the sense-lines and put extra lines in for where I thought there should be paragraph breaks: 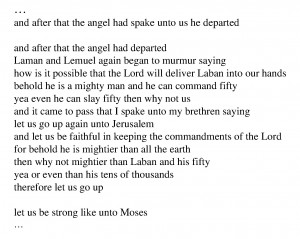 In the next stage, I added the LDS chapter and verse numbers in the left margin: 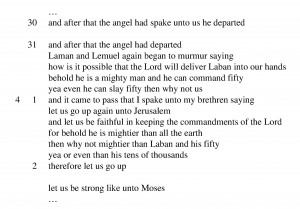 One of the things you’ll notice here is that chapter 4 comes in the middle of a paragraph. Reading this portion of the text, one sees that there probably shouldn’t be a chapter break, not even a paragraph break, where chapter 4 begins.

And finally, after the chapter and verse numbers had been added, I put in the punctuation (as well as the necessary capitalization), but from scratch, without looking at the original 1830 punctuation or the current punctuation (which derives from the 1830 edition): 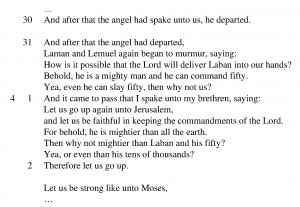 I found this last task to be the most difficult one in preparing the Yale edition. I’m frankly amazed of what John Gilbert, the 1830 typesetter, was able to do here, especially given the difficult syntactic structure of the Book of Mormon. It appears that for about two thirds of the text Gilbert determined the punctuation as he set the type. He did a really fine job, although he probably overpunctuated the text from our modern point of view (but this is what was expected in his day). What I wanted to do here was to determine anew the punctuation for the entire text. As far as I know, the Yale edition represents only the second time that the punctuation has been done completely from scratch – at least in a published edition.

The Yale edition also has an appendix that shows the significant changes in the text. There are 719 of these at the end of the book. In the Yale edition, I wanted the list of changes to appear in the appendix, not intruding upon the text itself. I should also point out that this appendix is not simply a comparison between the current standard LDS text and the Yale edition. Instead, it’s a representation of important changes that have occurred in the history of the text. In many instances, the Yale edition agrees with the current text. The appendix is not intended to be a listing of differences, but rather of significant variants in the history of the text.

At the beginning of the appendix there is a stemma that shows the textual relationship between the printed editions of the Book of Mormon: 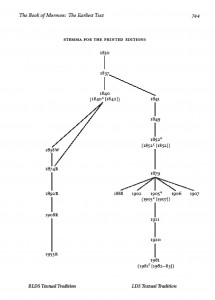 You will notice here that there are two textual traditions that split off from the second edition (the 1837 Kirtland edition). One is the RLDS textual tradition – that’s on the left. And on the right is the LDS textual tradition. These stemma relationships show the copytext for each printed edition from 1830 on. If you consider, for instance, the 1920 LDS edition, the stemma shows that its copytext was the 1911 LDS edition. This means that the 1920 typesetter worked off a copy of the 1911 edition, one that was presumably marked up with changes. In other words, the stemma here shows the copytext relationships between the various editions.