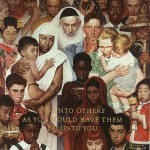 Christian religions, in general, believe in what is widely known as the golden rule: Do unto others as you would have them do unto you. In fact, as I understand it, most belief systems have some version of this idea. It seems to me that it is usually understood individually. But I have to believe that we should also apply it to groups — other countries, other peoples, other races, other sports teams… and other religions.

Despite its near universal acceptance, the golden rule is often ignored. And I believe that ignoring the idea of reciprocity is worse when it comes to groups. Somehow we seem to think that other groups don’t deserve what our group deserves.

Perhaps the golden rule was too trite to mention this past week when it was again so obviously ignored, while its uglier cousin, hypocrisy, was displayed. The hypocrisy in question was from New York Rep. Peter King, who started holding hearings last week entitled: “The Extent of Radicalization in the American Muslim Community and That Community’s Response.” Opponents of the hearings remembered that King himself was a supporter of radicals—the Irish Republican Army, known for its attacks on civilians that would today earn it the “terrorist” label. [FWIW, Unknown among most Mormons is the fact that one victim of the 1998 Omagh bombing by the Real IRA was a Mormon teenager and his mother.]

Although it wasn’t mentioned, it seems to me that the golden rule is part of the logic used by many objecting to King’s hearings. “Hold hearings on other groups as you would have them hold hearings on your group,” they seem to be saying. On Religion Dispatches, Johanna Brooks points out that Mormons should not only put themselves in the place of Muslims in the King hearings, but that Mormons have already been in the place of Muslims in congressional hearings. The last religion singled out in hearings by the U.S. Congress was Mormonism, in 1903, when the Senate looked at Mormons in deciding whether or not to allow Reed Smoot to take his seat. [However, it should be noted that Congress has held some 22 hearings on “Radicalized American Muslims” over the past 5 years.]

At a UVU Mormon Studies conference this past weekend, Boston University Professor Stephen Prothero made a similar suggestion, observing that Mormons have long been compared to Muslims and expressing surprise that most Mormons didn’t side with Muslims over the plan to construct a Mosque near ground zero. “I think these Mormon Republican people in power are more Republicans than they are Mormons,” Prothero said. “If they took the time to see themselves as at least as Mormon as they are Republican they would do the right thing. They are more faithful to their Republican politics than they are to their Mormon faith.”

Both Brooks and Prothero emphasize the similarities between the Reed Smoot hearings and King’s hearing. Those who are uncomfortable with the comparison will easily find differences. However, it seems difficult to deny that the overall tenor of these hearings violates the reciprocity idea espoused of the golden rule. Just as it seems hard to believe that the Senators who spent four years investigating the LDS Church during the Reed Smoot hearings would have welcomed similar inquiries into how their protestant and catholic religions were run, so also it is difficult to see Congressman King keeping quiet about an investigation into the “radicalization” of the American Irish community, which, as I understand it, was the primary source of funding for the IRA.

I think the golden rule is a bit more important than just “political correctness.” And, more importantly, it must also apply to groups. We have to stop this attitude that somehow our group is better or more important, or exempt from what other groups face.