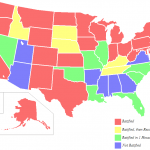 My earliest memory of conflict over Church decisions came because of a local stake division and boundary changes.I remember my mother venting about how one high councilor in one stake prevented the boundary change from following local political boundaries, which would have, in my mother’s view, give Church members a more unified voice in local politics.

Just a year or two later, if I recall correctly, the LDS Church announced its opposition to the Equal Rights Amendment, and the kind of conflict I saw increased substantially, and culminated among LDS Church members around Washington DC, where we lived, with the excommunication of Sonia Johnson.

Since then I’ve wondered about how LDS Church members arrive at the point that their political opinions lead to conflict with the Church, and to loss of their membership. The latest issue to lead to this kind of conflict is the recent Utah legislation described as taking a moderate approach to illegal immigration. On more than one occasion I’ve seen comments on the bloggernacle which criticize the Church for supporting this moderate position.

What makes this most recent reaction over immigration somewhat unusual is that the members criticizing the Church are conservatives. In other cases where the Church has gotten involved in politics (ERA, Proposition 8, the repeal of the 18th amendment), liberals have been the ones who have found their positions opposed by the brethren. Even those cases in which conservatives have found themselves out-of-touch with Church leaders (MX Missile, and for a few the priesthood revelation) somehow seem less vital than those which liberals have faced.

I’m somewhat confused at the vitriol of many of the reactions. I too have been occasionally caught off guard by the Church’s actions.While it was a welcome change, the priesthood revelation was a surprise. But the MX missile opposition was a real surprise. And to be honest, as time goes on and I raise two daughters, I am less sure of the opposition to the ERA.

I conceed the need for some kind of reasonable disagreement with Church leaders. Neither the gospel nor the Church seeks for mindless obedience, and I’m persuaded that there is a role for some kind of loyal dissent—with emphasis on the “loyal” part. From what I’ve heard the old saw that “once the brethren speak, the thinking has been done,” wasn’t even believed among the brethren, let alone be really considered as doctrine. [The Salt Lake Tribune addressed this issue somewhat recently.] We permit disagreement with Church policy, depending on how members act on that disagreement.

At least some of this reaction may have come from differing conceptions of the gospel. We all understand the scriptures and counsel of Church leaders in a form that fits our conceptions to some degree. We hear what we want to hear and emphasize what we think is most important, at least to some degree. I have the impression that we don’t interpret every scriptures the same way that we once did. In addition, there are in the gospel areas were apparently contrary principles need to be balanced: justice and mercy, becoming godly and remaining approachable, supporting the institution while helping the individual, allowing freedom yet supporting righteousness. Perhaps then it is no surprise that some have conceptions that end up leading to conflict with the Church.

I don’t know exactly what solution or solutions there are or how they might work. I don’t think there is a single, simple solution. Since the problem originates in our conceptions, the only solutions I can imagine are ones that require working out new conceptions. So the best I can offer is a series of questions that we can apply when our ideas, especially our poitical ideas, run into conflict with what the Church says or does. I’d be interested to see what additional questions, or other ways of approaching the problem of our ideology conflicting with the Church.

Here are my questions: