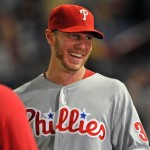 Last year was major for Major League Mormons—or at least for one of them. This makes the third year that I have looked at what those of us who follow these Mormons want to know each April, and I’m wondering if I should look at this information more often.

These Major League Mormons are, of course, those playing baseball professionally.

Last year was significant mainly because of one Mormon: Roy Halladay. The Phillies ace had perhaps the most successful season of any pitcher in baseball history. After winning the opening game for his team, Halladay then threw the 20th perfect game in baseball history on May 29th, and when the Phillies made the post-season, went on to throw only the second post-season no-hitter in baseball history. Throwing two no-hitters in a single season is remarkable itself—its only happened 5 times. Add the fact that one was in the post-season (when competition is stiffer) and the other was a perfect game, and Halladay’s pitching last year was unique.

If you follow baseball, (and maybe even if you don’t) you may find it interesting to know which players you see are Mormon, and who might make it to the Majors this year. The team you follow may include a Mormon player you don’t know about, or you might like to know about the Mormon players on visiting teams.

My own lists of Mormons who have played in the Majors include about 75 Mormons (including inactive LDS Church members and others with Mormon heritage) who have played in the majors. This is my third compilation of those Mormons who are actively playing in both the Major Leagues and in the Minor Leagues. I’ve managed to find a lot of additional information, especially on Mormons playing in the Minors.

So, here is a quick guide to the Mormons on major league rosters, or who are listed as being on minor league teams at this time, and therefore may be brought up to the majors during the year or in future years:

Minor League Players who may make the majors:

Players who may be Mormon: