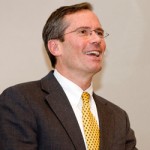 When I learned that Richard Daines, a fellow New York City Mormon, passed away last month, I knew I wanted to write something about him for several reasons. First, I like writing about Mormons outside of the Wasatch-front bias of Mormon culture. Second, I have my own bias towards New York City, and third, I admire his political achievements.

I didn’t know Daines personally—I think that I met him once or twice at stake events, but since he and his family lived in another ward our paths didn’t really cross. Still, he was well-known in the stake.

He was a physician, one who found that he had administrative abilities. After years of practice at St. Barnabas Hospital in the troubled central Bronx, Daines was named the hospital’s Medical Director in 1994, moving to the Manhattan-based St. Luke’s-Roosevelt Hospital Center in 2000 as its Medical Director, and then President and CEO in 2002.

At St. Luke-Roosevelt, one of the more important Hospitals in New York City, Daines soon became involved in politics, as happens with the upper management of any institution in a highly-regulated industry. But unlike many CEOs, Daines involvement in politics wasn’t just an attempt to further his company’s interests. Instead he looked to further the interests of his patients—by attacking the obesity epidemic.

In 2007, Daines was named as Commissioner of the New York State Department of Health by then newly-elected governor Elliot Spitzer, and soon put to work trying to make changes to Healthcare in New York State. He implemented the suggestions of the Berger Commission on 21st century healthcare facilities, promoted the development of primary care and patient-centered medical homes and established an office for developing and implementing electronic health records. And he focused national attention on childhood obesity. An important element of his solution to the problem was reducing the demand for sugar sodas by raising their price—through levying a “sin tax” on sugary carbonated beverages.

The governor supported the idea, and even after Spitzer was forced to resign because of an unrelated scandal, his successor, David Paterson (known for being the first blind governor in U.S. history), continued to support the idea. But the state legislature didn’t get on board, derailed by a combination of opposition to any new tax and interest groups threatened by the tax (among the groups was Pepsico, whose headquarters is located in Westchester county, New York).

After four years in office, Daines was not asked to continue as Commissioner by the new governor, Andrew Cuomo, in part because Cuomo had promised during the election not to raise taxes, and late last year Daines became a visiting scholar at the New York Academy of Medicine. He then died unexpectedly late last month from a sudden cardiovascular event.

Still, the idea of a sugar soda tax is being promoted by those convinced it will help fight obesity. Earlier this month journalist Alan Chartock wrote that Daines ‘fought the good fight’ in his attempt to tax sodas, and last week the chairman of the New York State Healthy Eating and Physical Activity Alliance, Michael Seserman, argued in the Albany Times-Union that the state should “Remember Daines, pass beverage tax.” Such a move would provide quite a legacy.

While sin taxes are somewhat controversial, I believe they often have support from Mormons—at least in terms of tobacco and alcohol taxes. From there it is not a very big stretch to a tax on sugary sodas, in my opinion. But given the conservative mantra against taxes, I assume that not many Mormons will make that stretch. I’m sure many of our readers will indicate what they think, and what logic most Mormons do or should use.

Regardless, its clear what Richard Daines thought. And tax or no tax, obesity clearly is a public health problem that needs attention.